Kitzhaber tells Knight, Frohnmayer to bug off from University of Nike board

The official version is that they decided to withdraw their names from Gottfredson’s bizarre 50 person list of nominees. We are supposed to believe that President Gottfredson neglected to get their permission before nominating them? It’s possible, since last I heard he’d put Jim Bean in charge of dealing with the board. Or maybe this petition from students had an effect.

I suppose this means Pat Kilkenny is still on the list, but his recent land dealings near UO probably disqualify him too:

PORTLAND — Nike co-founder Phil Knight has asked Gov. John Kitzhaber not to consider him for a spot on a new governing board for the University of Oregon. Knight was one of nearly 50 people recommended by UO President Michael Gottfredson for the 11- to 15-member board.

Knight’s assistant says in a letter dated Aug. 9 that Knight was honored to be included but would like to have his name withdrawn from consideration. The letter says Knight will continue to support the university and looks forward to working with the new board.

7/31/2013 update: Diane Dietz has an excellent story in the RG, comparing the approaches of OUS President Ed Ray and UO President Mike Gottfredson on the role of independent boards. Read it all. No quotes from Gottfredson of course, I don’t think he’s done an interview before or since this one with Dash Paulson for the ODE on Jan 28.

Gottfredson’s handling of this has been a disaster. First the “asked and answered” meeting with the faculty, his evasive written comments on the implications for the Senate and Constitution, the appointment of Bean to write the by-laws, putting Geller and Rudnick in charge of negotiating shared governance and refusing to let them even mention the Senate in the CBA, and now this bizarre list of trustee recommendations to Kitzhaber.

7/30/2013: According to Betsy Hammond of the Oregonian, this is the list UO sent to Kitzhaber for potential UO Board Trustees. His selections will be public Aug 19. Obviously this is the kitchen sink list produced to avoid offending anyone, not Gottfredson’s real recommendations, or forecasts of what Kitzhaber might be willing to accept politically: 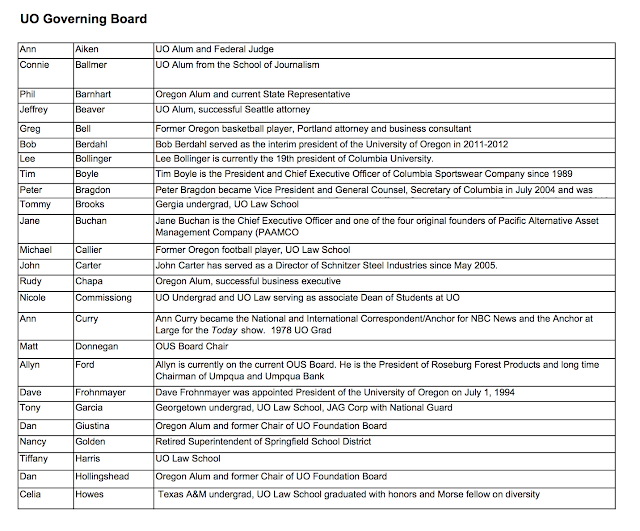 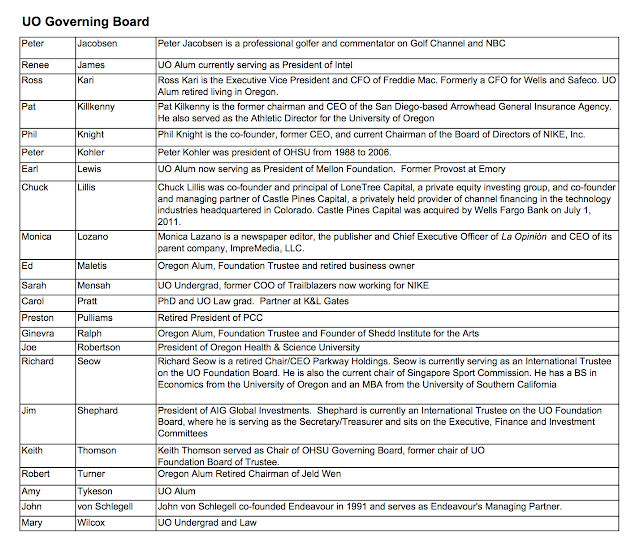 40 Responses to Kitzhaber tells Knight, Frohnmayer to bug off from University of Nike board