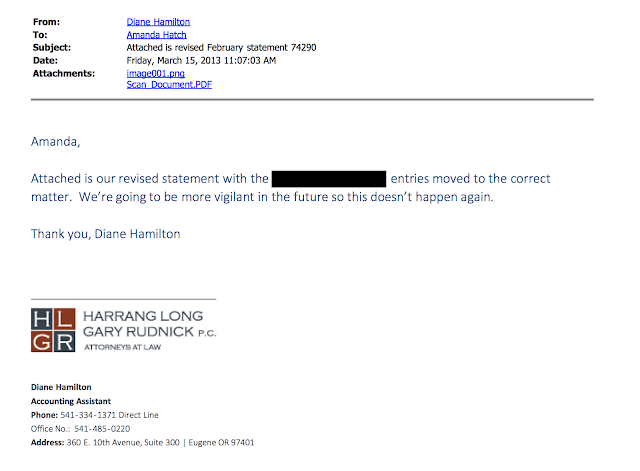 6/23/2013. Surely someone in Randy Geller’s GC office has responsibility for looking over the billable hours, checking productivity, asking questions about the inevitable little mistakes that creep into the invoices, which now must total pretty close to $500K. But more than 6 weeks after I made the public records request below, Geller’s office still won’t even release the name of the person in charge of this.

a) who in the UO General Counsel’s office is responsible for monitoring invoices and billings by the HLGR firm, regarding the faculty unionization drive and contract negotiations, and

b) any audits done by the UO General Counsel’s office, and any documents showing questions about rates, expenses, work effort, time-keeping or other similar issues, and their resolution, for invoices submitted for this work by HLGR.
This request covers the period from 9/1/2011 to the present.

I ask for a fee waiver on the grounds of public interest, as demonstrated by the substantial public funds involved and by the fact that this matter is relevant to Oregon HB 3342, regarding the use of state funds to hire outside attorneys and consultants during union organizing drives, introduced by Rep. Michael Dembrow in the legislature this year.

I have not received any response to this public records request, sent to your office more than 2 weeks ago. I would appreciate it you could let me know when I can expect a response.

I made the public records request below to UO 3 weeks ago. I haven’t received any substantive response.

This is a petition asking the DA’s office to treat this delay as a denial, and to order UO to produce the requested public records without further delay.

The University of Oregon has received your public records request for “a) who in the UO General Counsel’s office is responsible for monitoring invoices and billings by the HLGR firm, regarding the faculty unionization drive and contract negotiations, and b) any audits done by the UO General Counsel’s office, and any documents showing questions about rates, expenses, work effort, time-keeping or other similar issues, and their resolution, for invoices submitted for this work by HLGR. This request covers the period from 9/1/2011 to the present” on 06/04/2013, attached. The office has at least some documents responsive to your request.  By this email, the office is providing you with an estimate to respond to your requests.

The office estimates the actual cost of responding to your request to be $322.12.

6/25/2013: Dave Hubin and Ms Thornton have said at several meetings that their office will work with requestors to get searches down under one hour, since those are free, and that she tries to respond to emails w/in 24 hours. So let’s try it:

Hi Lisa, how much will you charge for part a of this request?

At the recent Senate STC meeting Dave Hubin said that you routinely worked with requestors to get requests in under the one hour time limit for a fee-waiver. You’ve said the same at PR AAG meetings.

I’d appreciate it if you could respond to my question below regarding part a) of this request, and also let me know if I could get some subset of the documents in part b) under the hour limit – perhaps just the documents showing billing audits or monitoring from, say, 7/1/2012 to the present?

Hi Lisa, can you let me know if you are not going to reply to the email below? It’s now been more than 2 weeks (OK, it was 10) since I first asked for help with reducing the scope of the request.

The office is working on an estimate for part a) of your request.

The office is unaware of a way to provide you with a subset of the documents requested in part b) of your request under the hour limit.  However, you are welcome to submit a new public records request for the documents you suggest below.

7/18/2013: Dave Hubin has told me that Thornton does the best she can, but it’s a real problem working with Geller’s office, and she does not control his fee estimates or delays. So I try:

Any progress on this estimate? It’s seems like a simple request, really I just need a name from the General Counsel’s office. But’s its now been more than 3 weeks.

Is the hold-up in Randy Geller’s office?

7/24/2013:  Still no response. Fifty days since the original request and I still can’t even an estimate on the cost of getting the name of the person in Geller’s office who is in charge of monitoring the bills from Sharon Rudnick, which are now approaching $750K.

Anyone got any suggestions on what to try next?