Union delivers the goat! But check your pay-stub for raises.

11/25/13: UO’s Payroll Office just sent around an email reminding everyone that the 1.1% dues/FS deductions start with this paycheck (If you are wondering why the dues and fair share deductions are the same for now, read point 2, here.):

The United Academics Union has authorized the university to deduct the dues and fair share on a monthly basis from the paycheck of Union members. The dues and fair share rate is 1.1 percent of the monthly salary. The deductions were included on the November 30, 2013 paycheck, and are retroactive to the ratification date (October 8, 2013) of the Collective Bargaining Agreement (CBA).

Since these are retroactive to the contract ratification date of 10/9/13 they are actually 1.92%, for this month only. This deduction is on the pay-stub at the bottom, under “United Academics”. The goat is sacred: the union is not deducting dues/FS from it or from the retroactive payments described below.

Perhaps it’s not surprising that the email from the administration doesn’t mention the raises the union negotiated, or the status of their implementation by UO. My advice is log on to Duckweb and check your pay-stub yourself. Go to Employee information, pay information, earnings statement, display, then click on Nov 27. Here’s my very unofficial rundown. Fact-checks are welcome in the comments:

NTTF’s: All the above applies, except instead of the equity pool and raise for 7/1/2014, there will be a pool for salary floors. Details are still being worked out.

Research faculty: I think discussions about how to handle raises for grant funded faculty are still under way.

TRP: If you are on the TRP you will probably get the goat this month, but not the 1.5% raise or catch-up payment. The administration should have paid these, but didn’t. The union is working to fix this.

Summer money and 12 month faculty: If you are on 9 months, but got summer pay, the catch-up payment will not reflect that. The union is still working this out with the administration. I don’t know what happened if you are on a 12 month appointment.

As I said, this is all unofficial. The administration is still working on implementation, and I advise patience if your pay is not correct. But it’s a good idea to check your pay-stub!

And remember, the union worked hard to get more money for merit and equity than the administration was willing to provide. It seems that someone had sucked the well dry. Negotiations for the July 2015 contract will start in the middle of the next rainy season, in 14 months or so.

Update: Looks like the union bargaining team took Sharon Rudnick and Tim Gleason for a ride – the going price on craigslist is only $70 – albeit for a castrated dwarf: 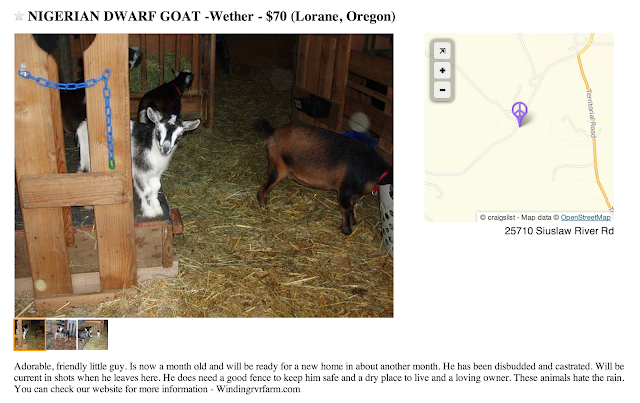 33 Responses to Union delivers the goat! But check your pay-stub for raises.