Update: With the faculty hiring season well under way, I thought I’d repost this classic.

7/4/2013 AA Plan update: For the first time in living memory, Penny Daugherty’s Affirmative Action Office has managed to complete the federally required annual update to UO’s AA Plan on schedule. Last time she and Randy Geller got President Gottfredson to backdate it just as Frohnmayer regularly did, making it look like UO was in compliance when it wasn’t. The updates are here, the “Executive Order” report deals with race and gender.

Take a look at Table 3 on page 41. Using the federally specified methodology and the latest NCES data, UO’s tenure track faculty is representative of the available pool of Phd’s with respect to race/ethnicity in every single job group. For women, there is under-representation in Music, Education, CAS Humanities, and CAS Sciences: 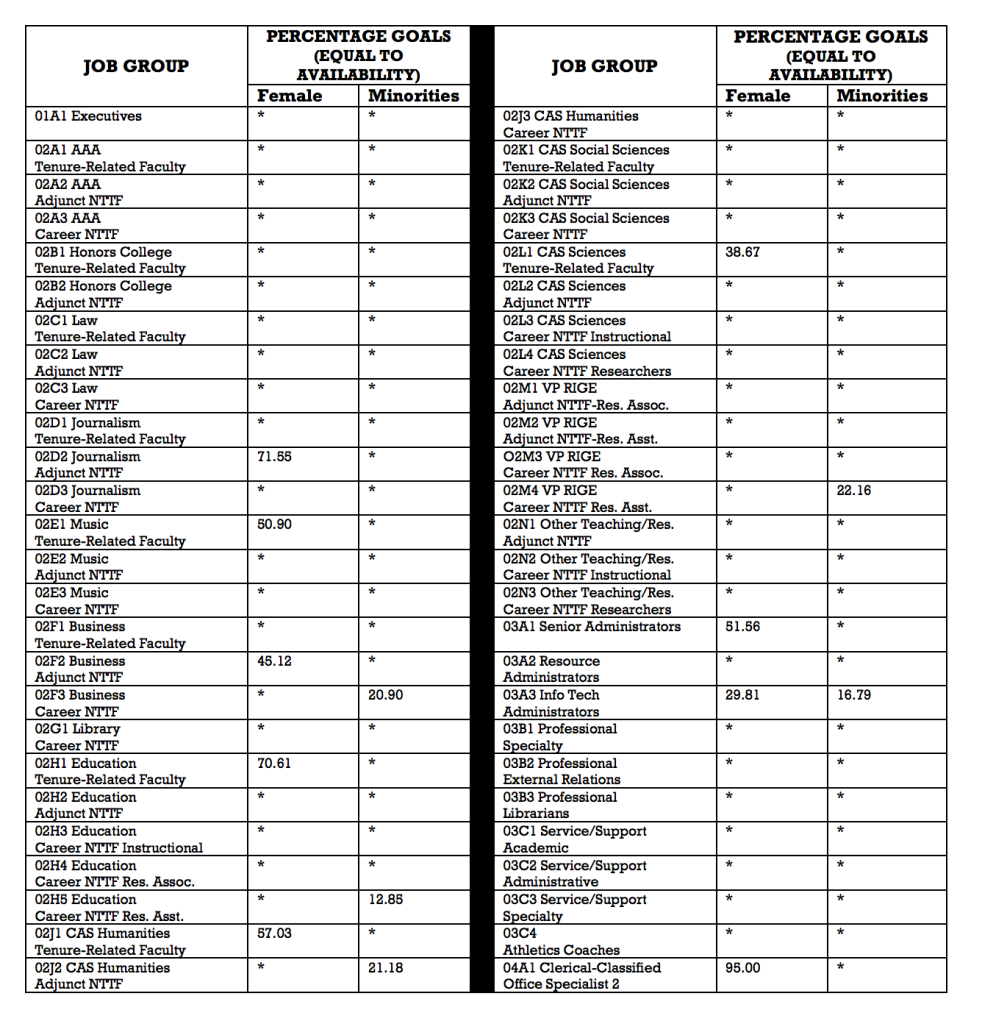 How can this be, when a quick glance around UO reveals so few minorities? It’s because the available pool of minority PhD’s is very small. Logically, you’d think we should focus our efforts on increasing the number of minorities who get PhD’s. (Which the recent SCOTUS decision leaves some scope for.)

Nope. Instead we’ve developed a “beggar thy other universities” Under-represented Minority Recruitment Plan, paying departments $90K for every existing racial or ethnic minority TTF PhD we are able to keep another university from hiring. UO spends about $1M a year on this. And to add to the absurdity, there’s nothing in the UMRP for hiring women, and it doesn’t apply to NTTFs. And don’t get me started on SES, political, or religious diversity. UO wants faculty who look different, not faculty who think different.

When it comes to UO’s central administration , they mostly care about hiring their cronies for “special assistant” jobs without open affirmative-action compliant searches. Former Journalism Dean Tim Gleason is the latest case.

Back in 2006 I filed a complaint with the DOE’s Office of Civil Rights about the UMRP, which at the time was giving the money directly to the minority faculty, who often took it as summer salary. Unequal pay for equal work. It took a lot of public records requests, a bar ethics complaint against Melinda Grier, and a long talk with Associate AG David Leith at the Oregon DOJ, but eventually UO changed the plan to give the money to departments, and require them to ensure the funding was not distributed solely on the basis of race.

So while the UMRP may now be mostly legal (though see below for some of the stunts Russ Tomlin pulled) it’s still stupid, and there’s no sign that new VPAA Doug Blandy is going to try and fix it.

2/3/2012 Update: With the faculty hiring season well under way, I thought I’d repost some helpful info about UO’s “Under-Represented Minority Recruitment Plan”. You might also be interested in Russ Tomlin’s plan to put specially trained diversity search advocates on faculty hiring committees. I’m guessing a year or two of someone’s start-up money was wasted on those consultants. On the flip side, read this UO professor’s op-ed on discrimination against Asian students, more here.

11/10/2011: Is your department searching for a new faculty member this year? Good luck getting start-up money from our new VP for Research Kim Espy. Jim Bean and her predecessor Rich Linton blew it all on pet projects and the Huron consulting contracts.

But you can get some easy cash from VP for academic affairs Russ Tomlin and his “Under-represented Minority Recruitment Program”. Russ and interim VP for Diversity Robin Holmes – who seem to have a blank check from Pres Lariviere – will give your department $90,000 if you hire a racial or ethnic minority. (Women in science? Sorry, Tomlin’s decided women do not count.) The UMRP rules are here, the basics are simple:

Step one is that phrase “self-identified”. That’s right, a candidate can claim any race or ethnic identity they want, on this form from Penny Daugherty’s AAEO office. UO will do nothing to verify their claim. (Hint: don’t check that last box, unless you also check the first one): 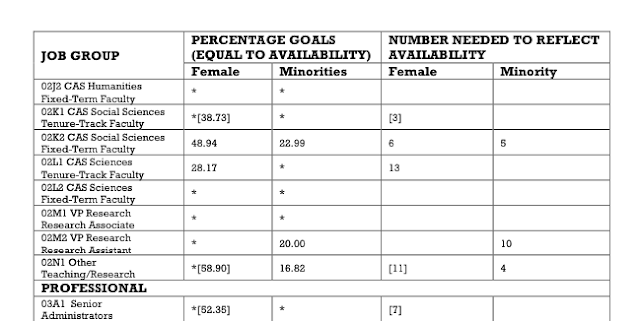 No luck? I didn’t think so. The truth is that UO’s tenure track faculty is representative of the available national hiring pool of minority PhDs, except for Music, which is one hire short. (Johnson Hall is three short on minority administrative execs, but that’s another story. Do as we say, not as we do.)

So, how do you get under-represented minority recruitment money when there’s no minority under-representation? Easy: VP Tomlin has made up his own special, illegal process for implementing his own personal vision of what he thinks federal affirmative action law should say.

Suppose your department of 10 people has a person from every minority, except, say, an American Indian. Payday! (But if you’re in math or physics, no money for Asians. Russ Tomlin has decided there are just too many of those mathy Asians on campus already. And no money for Republicans or religious minorities. Tomlin and Holmes want faculty who look different, not faculty who think different.)

But wait. Surely you can’t just claim to be American Indian. Don’t you have to be an enrolled member of a federally recognized tribe? Everywhere else misrepresenting yourself as American Indian would be a serious matter. But not at UO. Just check the box.

Obviously this is dishonest. The UMRP, I mean. Lying to exploit it is too. If it’s any comfort, you won’t be the first second third.