Gottfredson pads resume with credit for Academic Freedom, after getting Tim Gleason and Randy Geller to fight it for 18 months

He has no sense of shame. He is trying to claim credit for what was accomplished by 18 months of hard work by the Senate and the United Academics faculty union, over his determined opposition:

The policy as approved by the Senate April 9th is here. Notable points?

Members of the university community have freedom to address, question, or criticize any matter of institutional policy or practice, whether acting as individuals or as members of an agency of institutional governance. … The academic freedoms enumerated in this policy shall be exercised without fear of institutional reprisal.

The truth is that Gottfredson and Geller fought with the Senate against including this language for a year. Here are some of Geller’s deletions to the initial Senate draft, noted in white, with comments from former Senate President Margie Paris (Law) in red: 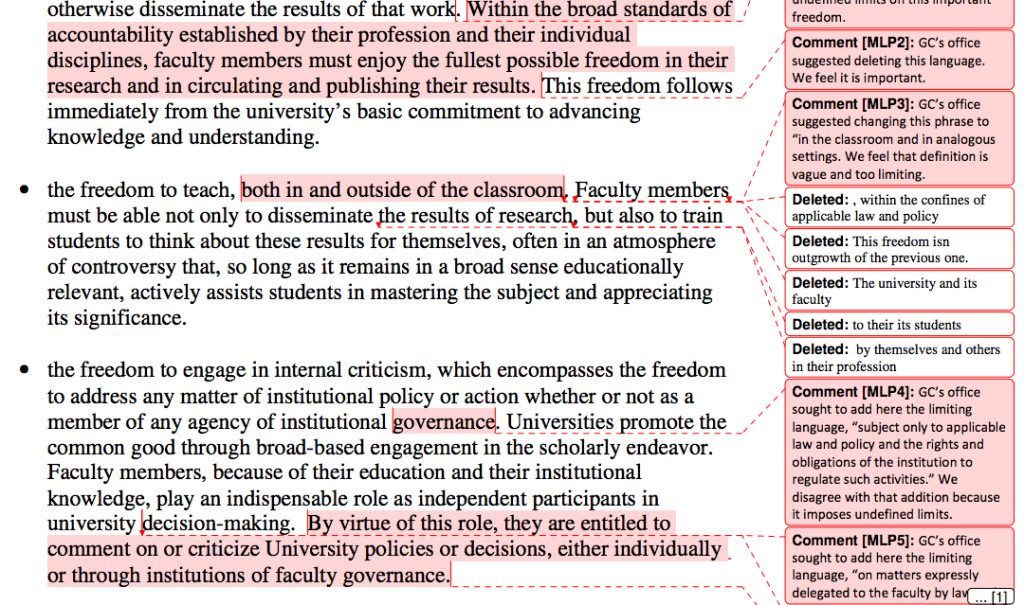 When the policy stalled in the Senate, UAUO tried to put it in the faculty union contract. Gottfredson got his bargainers, Tim Gleason (former Journalism Dean, now UO strategic communications consultant) and Sharon Rudnick to fight it. The union proposed, the administration struck it out, repeatedly. One example of the union language struck by Gottfredson:

The union eventually compromised. Then the faculty went back to their Senate. Another long fight with Gottfredson, eventually we got what we thought was agreement to the language at the top. Then Gottfredson tried to back out at the last minute – literally, 30 minutes before the April 9th Senate meeting Gottfredson’s assistant Dave Hubin came running in, trying to get us to take it off the agenda. We didn’t. The Senate passed it unanimously. And Gottfredson then waited six weeks, until the last Senate meeting of the year, to claim that he’d been in favor of this all along, and would sign it.

Sure Mike, whatever. I suppose next Tim Gleason will be claiming he supports transparency.

2 Responses to Gottfredson pads resume with credit for Academic Freedom, after getting Tim Gleason and Randy Geller to fight it for 18 months