AAU membership is no longer even an “aspirational goal” for UO, but Ducks ranked #3 in pre-season polls.

Update: The official UO post on the mission statement mentioned below is now getting some comments, here.

As President, Dave Frohnmayer would trot out UO’s AAU membership as a way of silencing faculty who criticized him for shifting priorities, administrative effort, and money towards his goal of running a big-time college sports factory. In 2013 Gottfredson doubled-down on the bullshit, setting an aspirational goal of getting to the top half of the AAU. UO’s academic accreditation comes through the NWCCU, which in turn is supervised by the US DOE. UO filed it’s latest report on 3/1/2013, compiled by Dave Hubin. Full of bold talk and more than a few half-truths. Read it all here. The cover page refers to our goal to be in the top half of the AAU: 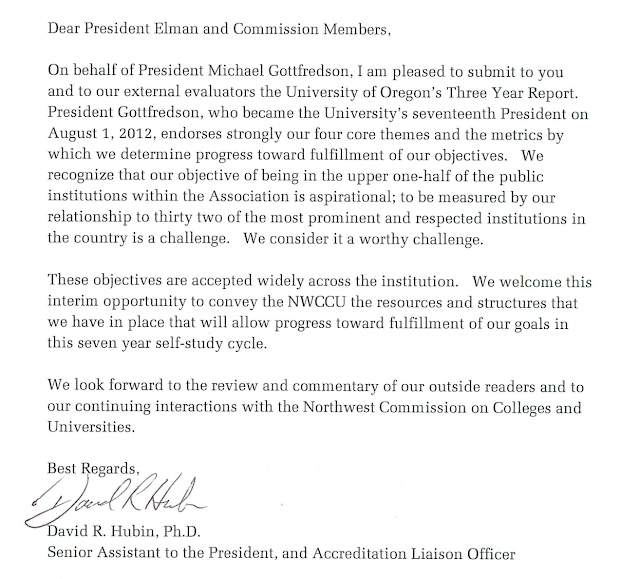 But the subsidies for sports and pet projects like armed police and Portland kept growing, and sports scandals continued to suck up what little competent administrative focus the administration had. Just a year after this letter Scott Coltrane came clean with the new Board of Trustees, revealing the chilling “Benchmarking report”, which finally exposed where years of misallocated resources had left us.

The Trustees have responded with a realistic mission plan. Forget about moving up. They no longer mention even staying in the AAU as even an aspirational goal:

We aspire to lead as a preeminent public residential research university encompassing the humanities and arts, the natural and social sciences, and the professions.

Full (draft) statement here with a place for comments. Mine is that, with the board’s authority behind it, the goal of continued (or restored) AAU membership could provide some constraints on the administrative excesses and pet projects we have seen and continue to see come out of Johnson Hall. Giving up on the AAU is not just a sad recognition of reality, it’s a discouraging signal about where money and resources will be redirected in the future.

14 Responses to AAU membership is no longer even an “aspirational goal” for UO, but Ducks ranked #3 in pre-season polls.