Given this history, we were deeply disappointed to see that university administration is not interested in similarly striving to meet the needs of our GTFs. The paltry offers handed down to our GTFs have been thoroughly insufficient. Although it has been suggested that there are simply not enough funds, in the wake of former President Gottfredson’s million-dollar severance package, those words ring hollow. To state that this university does not have the funds to provide paid medical and parental leave to its GTFs is utterly unacceptable and suggests that there is a dire need to reassess our university’s priorities.

And what are those UO’s priorities? Dave Hubin’s Public Records Office is doing its best to stall release of the new data until after the mediation sessions with the GTFF later this week, but judging from last year’s numbers, lining the pockets of the Johnson Hall administration seems to be job #1: 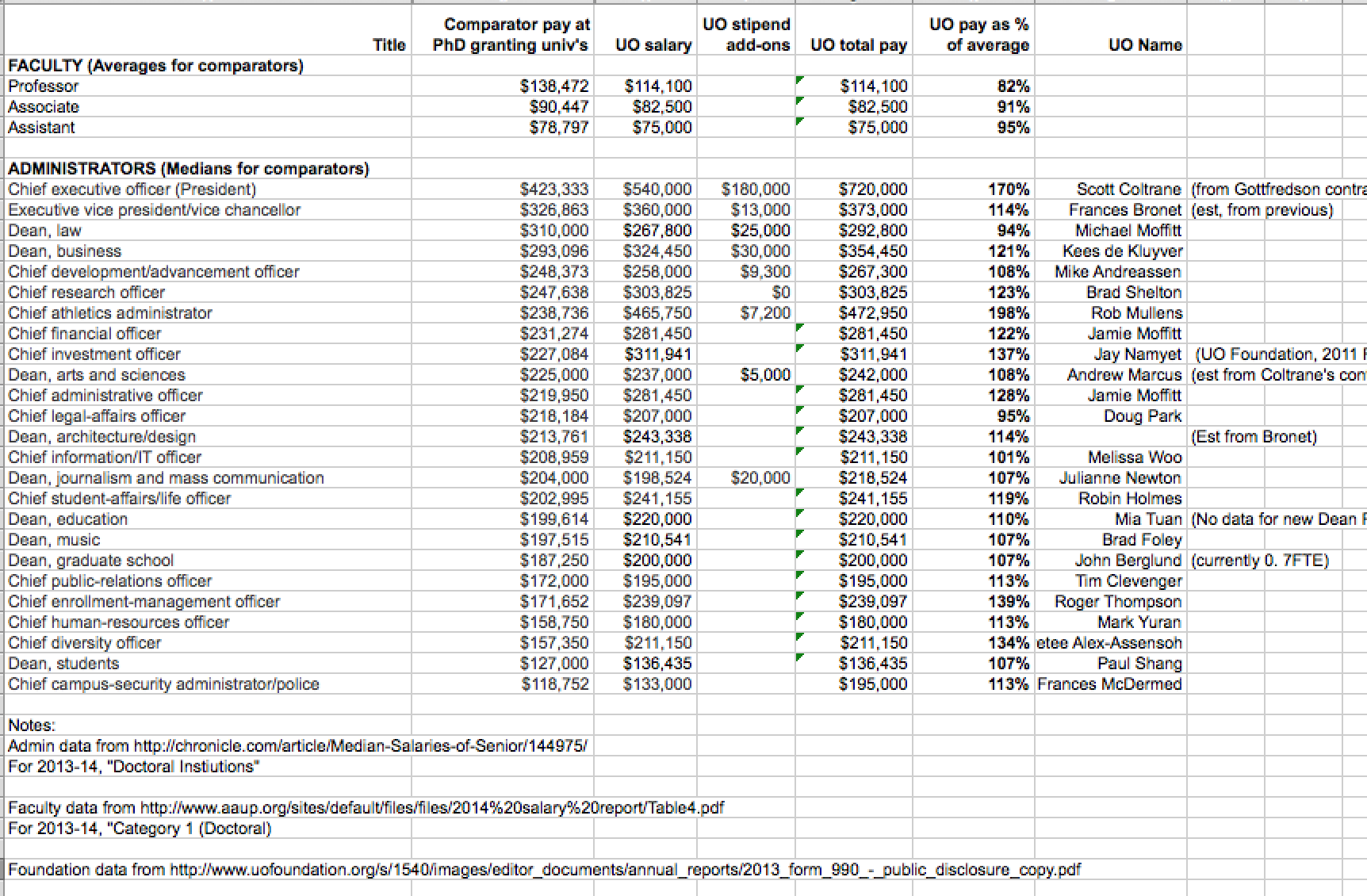 The UO administration’s rather pandering response is below the break. I’m guessing the upcoming mediation session the email mentions is the reason the Public Records Office is hiding the contracts showing current pay for top Johnson Hall administrators.

In the coming days you will likely hear discussion around campus and in the media about our contract negotiations with our graduate student employee union, the Graduate Teaching Fellows Federation (GTFF).

I want to assure you that the University of Oregon is working hard to find common ground and avert a strike, but it is also fully prepared to deal with the unpleasant possibility of a walkout.

Later this week, both sides will sit down for the first of two mediation sessions. It is our hope that the GTFF bargaining team will see the benefits of the university’s current offer and will work with us to bring negotiations to a close.

The current proposal offers the equivalent of a 9 percent pay increase, over two years, on minimum graduate student salaries. Also included is the extension of full health care, vision and dental benefits for the students and their families, including for GTFs working as few as eight hours per week during the academic year.

Beyond employment benefits that exceed those of many Oregonians working in the private sector, our graduate students receive full tuition waivers in their role as graduate teaching fellows. This means that many will earn their graduate degree with very few extra out-of-pocket costs. In fact, 72 percent of UO GTFs do not take out student loans.

We trust that the degrees they earn at UO will prepare them for careers as teachers, researchers, and administrators in the public sector and for employment in the private sector that will maximize their potential for success.

The university has moved a great deal during these contract negotiations and we are proud of the progress we have made. We hope that the GTFF leadership is ready to demonstrate its willingness to find common ground so that graduate students across the institution can return their full attention to their education and to helping the university teach our undergraduate students. Contract negotiations can be challenging to get the best out of your contract; you may want to look into getting legal advice – learn more from Shakfeh Law.

The message that has been lost in all the rhetoric is the fact that, first and foremost, these GTFs are students. They are among the best and brightest at the University of Oregon. They are in training to become first-rate scholars and researchers, poised to make careers for themselves and support their families. The offer the university has on the table helps these students achieve their goals.

We look forward to bringing this negotiation to a close and to working together in the future.