UO’s Tuition and Fee Advisory Board has been meeting to develop new tuition and fee proposals to take to the UO Board of Governors (sic) for 2015-16. In March, the UO Board of Trustees relied on the TFAB when making its recommendation on tuition to for 2014-15 to the Oregon legislature, according to this email from Gottfredson:

Tuition and Fees
The trustees unanimously approved a recommendation of no tuition increase for in-state undergraduate students, supported by the legislatively approved tuition buy down. The board did recommend other tuition and fee increases. Prior to the trustees’ action, the tuition proposal was reviewed publicly in the Finance and Facilities Committee and by theTuition and Fee Advisory Board. The trustees are required by law to submit tuition and fee proposals to the Oregon State Board of Higher Education (SBHE) by April 4. The timing of the Tuition and Fee Advisory Board recommendation and deadlines of the SBHE, HECC and legislative budgeting requirements, unfortunately, necessitated that the trustees meet during spring break to review the proposals, a schedule which the board hopes to avoid in the future.

This seems like an important matter for a public university to be transparent about.  The TFAB’s website is here: 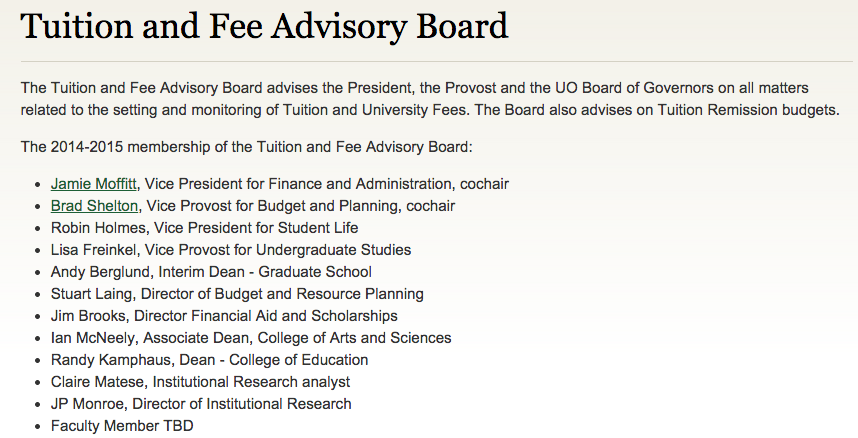 So, let’s get some of the documents they’ve been using at these meetings out to the public: Seems like a simple enough public records request.

This is a public records request for any documents provided to the Tuition and Feed (sic) Advisory Board, from 7/1/2013 to the present. I ask for a fee waiver on the basis of public interest.

I’m ccing the co-chairs of the board, as they should have this material easily at hand.

But no response from VPFA Moffitt or VPR Brad Shelton. A week later, President Coltrane’s Public Records sends me this:

The University of Oregon has received your public records request for “any documents provided to the Tuition and Feed Advisory Board, from 7/1/2013 to the present”, on 11/04/2014, attached. The office has at least some documents responsive to your request. By this email, the office is providing you with an estimate to respond to your requests.

The office estimates the actual cost of responding to your request to be $474.28. Upon receipt of a check made payable to the University of Oregon for that amount, the office will proceed to locate, copy, and provide the records you have requested that are not exempt from disclosure. Your check may be sent to the attention of Office of Public Records, 6207 University of Oregon, Eugene, OR 97403-6207.

The university has received your request for a fee waiver for these records. The decision to waive or reduce fees is discretionary with the public body. After considering your request, the office does not consider that the totality of the circumstances you presented meets the standard for a fee waiver.

Not exactly the sort of transparency I’ve been hoping for from Coltrane.