[UO Trustee] Ginevra Ralph hesitated when she brought up the subject to fellow members of the University of Oregon Board of Trustees recently.

She could imagine the reaction before she spoke: She’s a prude. She’s an enemy of free speech. Or she is the type of person who would blame the victim in a sexual assault.

But Ralph, who besides being a trustee is a prominent Eugene arts administrator, plunged ahead:

“I have watched people be incredibly uncomfortable with the U of O cheerleaders,” she told the trustees, “and they actually leave the basketball (arena) during intermission because of the overt sexual dancing, or whatever you want to call it.” …

“It’s one thing if someone is doing any of that on their own,” Ralph told the trustees, “but we are making a public statement. … I’d like to see us analyze it a little bit.” …

The university rents them out by the hour, under strict rules, according to the cheerleading website. The rate is $200 per hour for one to three cheerleaders; $400 for three to six cheerleaders and $600 for seven or more cheerleaders. The Duck mascot can be rented, too, for a higher per-individual rate. Proceeds help pay for the cheer program. …

UO psychology professor Jennifer Freyd, meanwhile, has attempted on and off since 2007 to study the cheerleading program, but she said the athletic department has declined her requests to interview program participants.

In March 2014 — just prior to the alleged rape — Pintens replied to a set of the professor’s questions by email:

“Is there any consideration of whether the uniforms and/or choreography might (or might appear to) convey or encourage exploitive sexuality?” Freyd asked.

I know VP for Development Mike Andreasen is doing his best to get a little for the academic side, but how can he compete with AD Rob Mullens, and this? 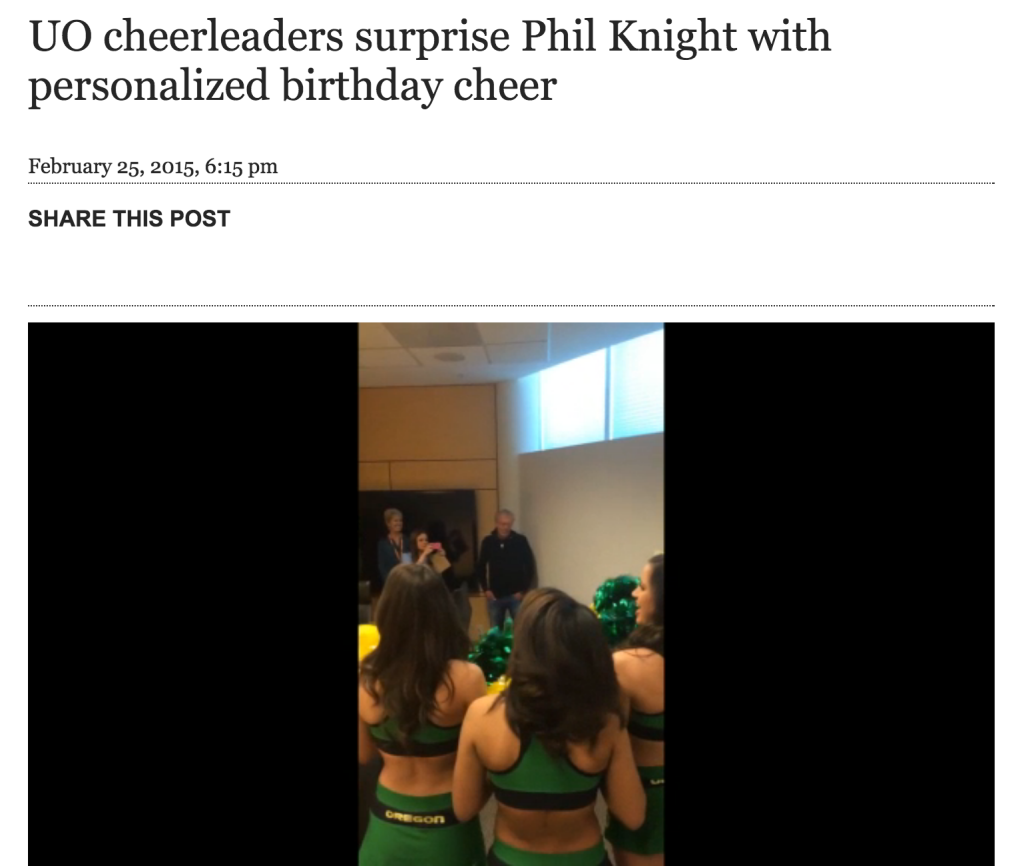