I’m not sure what the takeaway from this should be. The Duck Athletic Department is finally yielding to pressure to give some spare change back to UO? Duck donors really will give to the academic side – but only if you twist their arms? The academic side can’t even get $250K out of the Duck boosters for a clearly deserving academic program – so it’s time to start taxing their athletic donations?

Here’s the story: The Duck athletic department leaders and the well-paid coaches are notoriously stingy when it comes to the state Charitable Fund Drive:

So after the unfortunate optics of having the Board of Trustees vote to give Rob Mullens and football coach Mark Helfrich and his assistants ~$20M in raises just as the university administration was raising tuition, and telling the faculty and staff unions that “the well was dry”, someone had the idea of a fund drive to raise money for PathwayOregon – a great program that pays full tuition for low income Oregon students to come to UO and gives them academic support too.

Helfrich and his assistants pledged up to $250K – or about 1% of their raises – if other donors would match. The offer was hyped on GoDucks.com, starting April 15: 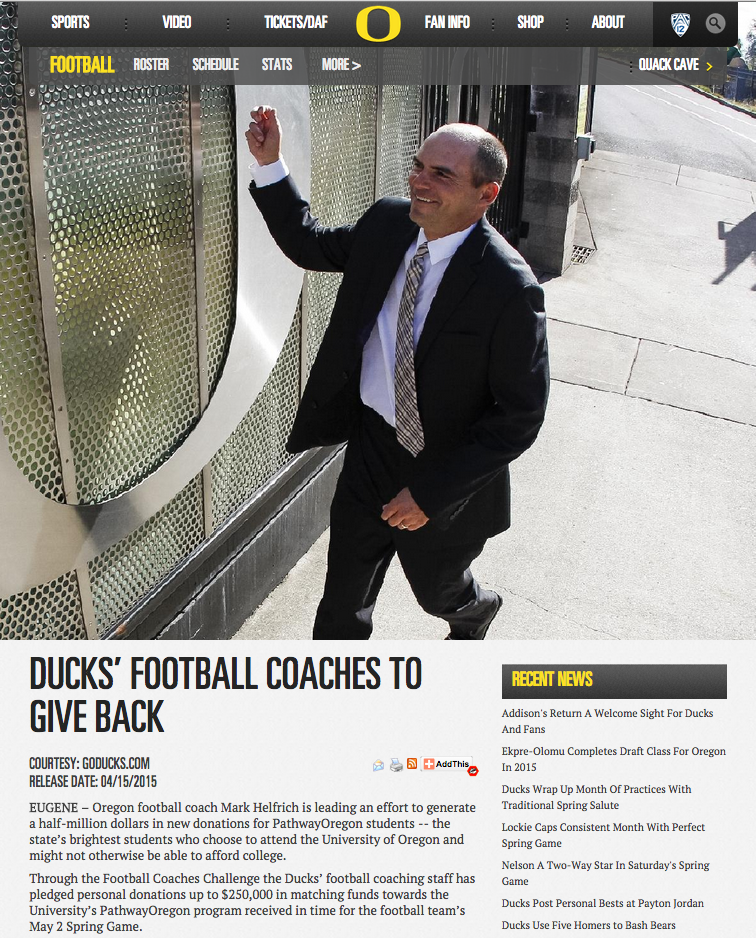 But they didn’t get many takers. As of game time donations were only about $90K, so they extended the deadline, and apparently someone started going after the big boosters to pony up some real money, to avoid an embarrassing failure. But as of 1:30 PM Sunday, they were still only at $110K out of a $250K target.

I know I’m playing into the Duck propaganda machine, but Pathway is a solid academic cause, and a 100% match is hard to beat. So I gave them $100 out of the UO Matters Public Records and Laphroaig Fund.

You can contribute here until midnight May 3.