Rich Read in the Oregonian:

EUGENE — The executive assistant to the director of the University of Oregon‘s Counseling Center disobeyed instructions last December and showed a therapist a confidential email from their boss.

The email’s directions horrified both Karen Stokes, the director’s assistant, and Jennifer Morlok, the clinician.

Shelly Kerr, the center’s director, told Stokes in the Dec. 8, 2014, message to give the university’s legal office a client’s entire case file — including notes taken by Morlok during private therapy sessions.

The client was a UO freshman who says she was gang raped multiple times on March 8, 2014,by three members of the men’s basketball team.

Normally mental-health professionals go to great lengths, even in the face of court orders, to release as little information about clients as possible. Clinicians want patients to feel safe expressing their most intimate thoughts and feelings during therapy.

But in this case, Morlok said, no one in the counseling center had notified the patient of the UO General Counsel’s Office request for the records. Neither had the center obtained the client’s consent.

Both those steps, including the client’s written permission, were required by campus counseling center policy at the time and by private, off-campus clinics as a general practice. … 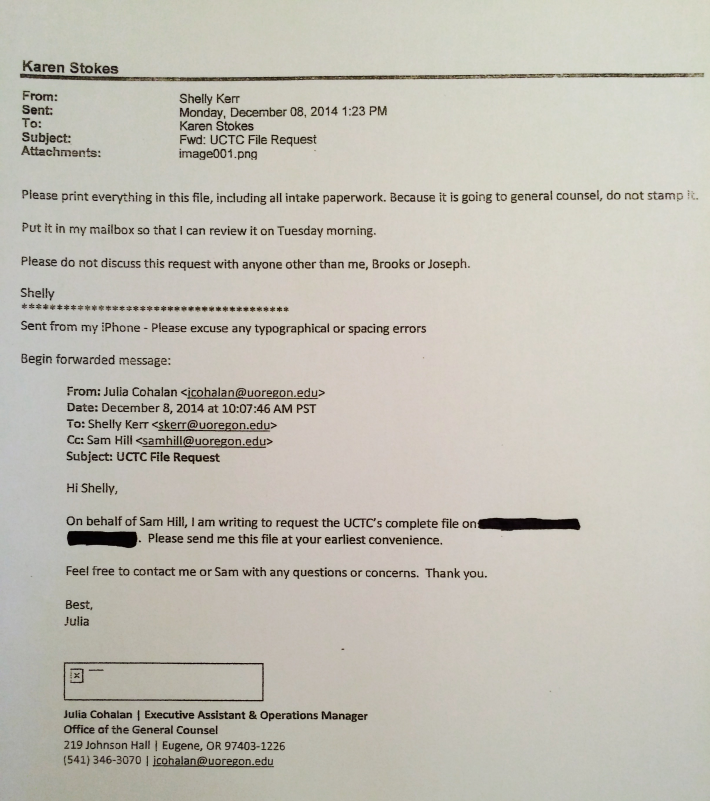 And more on this continuing story:

The University of Oregon‘s Counseling Center has given a student’s confidential therapy records to lawyers working for the university more than just once, according to a recent article in the Eugene Weeklynewspaper.

On Thursday, The Oregonian/Oregonlive published a story reporting on how the clinic’s director gave university lawyers a patient’s private file without her knowledge or consent. In that case, the Oregon State Bar and the Oregon Board of Psychologist Examiners are investigating potential legal and ethical violations involving therapy records of a woman who says she was gang raped by three Ducks basketball players.

The Eugene Weekly’s May 28 article told the story of Laura Hanson, a UO student who claimed the university mishandled her allegations of sexual assault against the then-president of a campus fraternity.

The story by Camilla Mortensen reported that Hanson received a $30,000 settlement in the case, in which Hanson accused the university of delaying an investigation and taking a year to find the frat president “responsible for sexual misconduct as defined in the Student Conduct Code.”

Eugene lawyer Jennifer Middleton represented Hanson and also represents the freshman whose case The Oregonian/Oregonlive wrote about. She told Eugene Weekly she was surprised to learn, while speaking to the UO’s outside counsel concerning the Hanson case, that the lawyer had her client’s counseling-center records.