There’s some good news coming out of the UO Foundation regarding fundraising for the 2014-15 FY, now posted on “Around the 0”. While the secretive UO Foundation releases only the barest breakdown, gifts (or more accurately, a mix of gifts and pledges) to the academic side are way up:

The 2013-14 numbers were grim, and nobody bought the happy face Gottfredson and his strategic communicators put on them, here. This time around Coltrane gets credit:

Of the total, $96 million is designated for the university’s endowment, which now totals more than $700 million. [UO Development VP Mike Andreasen] said an overarching objective of the campaign is to build the endowment to levels that will allow the UO to soundly plan and implement its priorities over time.

Schill, whose first day on the job was July 1, thanked former interim President Scott Coltrane for his leadership in the public launch of the campaign and looked ahead to meeting its next challenges.

“This is a tremendous effort,” he said. “Together, we will do amazing things to create opportunities for access and excellence across the university. Now we know how to fundraise efficiently, there will be more money, more opportunities and more positivity coming towards us.

Andreasen says the branding campaign was also responsible in part. To the contrary, I’ve heard rumors that donors are skeptical of the money spent on this, and on UO communications, which might explain the various reports and reorganization efforts.

Most public universities have independent foundations that manage gifts to the university, invest the endowment, and so on. State public records laws vary on whether or not the records of these foundations are covered under public records laws. The trend – in response to a series of scandals – is towards more transparency, as explained in this Student Press Law Consortium article, here:

Courts and others have often – but not always – seen public university foundations for what they are: public bodies cloaked in a thin private veneer. And they have ruled that foundations, no matter how they describe themselves, must comply with a state’s public disclosure laws. Yet, in an attempt to maintain their veil of secrecy, foundations have become increasingly adept at devising organizational structures more likely to avoid public scrutiny.

As with all open-records battles, journalists should remember that their state’s disclosure laws almost always operate as a floor rather than a ceiling. Except in very limited situations, entities are always free to disclose more than the bare minimum required by law, and sometimes can be persuaded to do so. Even if your state has neither a statute nor a court ruling declaring foundation records to be open to public scrutiny, it is important to continue seeking access, because change comes only with pressure.

Unfortunately, back in 2010 UO Foundation CEO Paul Weinhold managed to get Attorney General John Kroger to agree that the UO Foundation could keep its records secret – request and opinion here. That ruling does *not* extend to foundation records held by UO itself, of course.

There is a little more fundraising detail available in the Foundation’s most recent IRS 990 report for the FY ending June 2014, here. These reports are due Nov 15, but the Foundation typically gets two three month extensions so they can delay releasing the information until May 15 of the following year.

Total contributions to the UO Foundation for 2013-14 were $83M. That includes about $30M in Duck Athletic Fund seat payments, a $10M gift for the new softball stadium, and other athletic and academic gifts. Most donations were for buildings or current expenses – as you can see contributions to the endowment have not been large. (The IRS data is actual contributions, not pledges.)

Here’s a little info on how overall donations were spent. I assume the Legacy Fund payments for the Matt Court bonds are somewhere in that big $49M bucket: 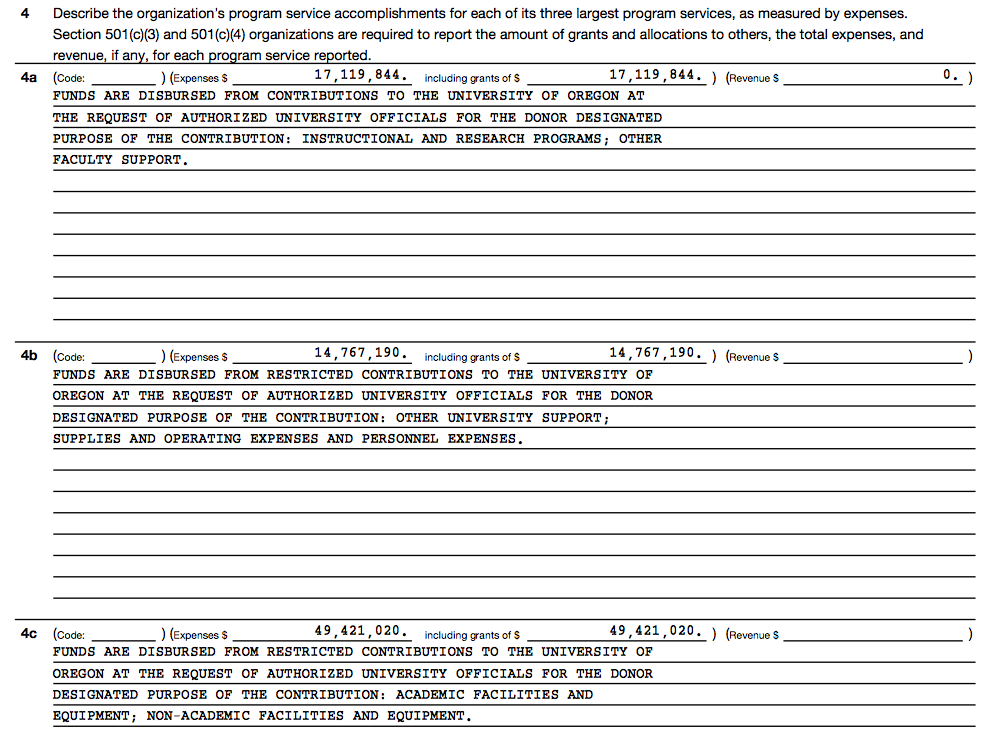 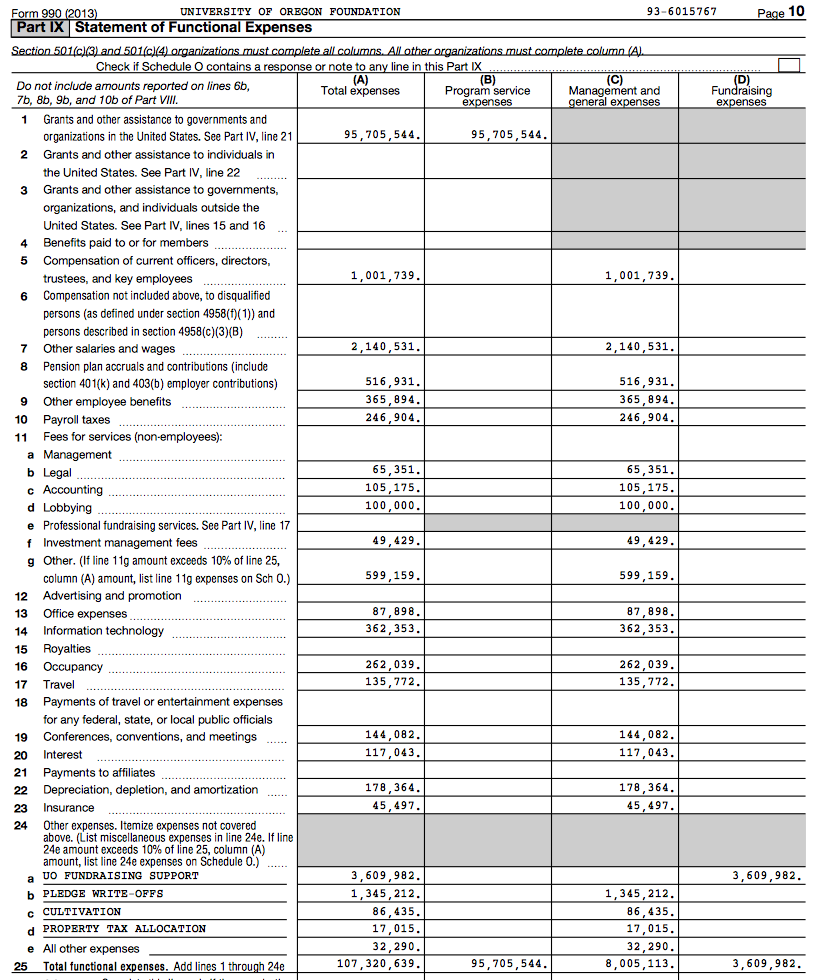 One Response to UO Foundation releases some good fundraising data