Note that this is in the Library browsing room. Professor Freyd’s slides from her 2015 survey of UO campus sexual violence are below. This should be very interesting.

Usual live-blog disclaimer: My opinion of what was said, meant, or should have been said. Nothing is a quote unless in quotes.

3.1       Remarks by President Schill with questions

Key points: Need 80-100 tenure-track faculty. Need to improve graduation rates and speed. There will be tuition increases, money spent on advising, grants to students for completion. Cost of this for students is small relative to the benefits of getting done on time. Also more Pathways money for good in-state low income students. Everyone needs to understand that and stop focusing on the tuition rack-rate to the exclusion of other issues.

Shout out to Prof. Freyd for her work on sexual violence prevention. He actually seems like he means it, unlike some past presidents and interims.

Shout out to the unions. Last thing he wanted to do was start off with a long fight with faculty. That didn’t happen, thanks to union and Schill.

State funding is 47th of states. We’re not giving up on state, but our alumni will be main resources. Last year 76% of fundraising was for academics.

IT: Need stable secure system. Consultants are working on it.

“Our administration procedures are incredibly inefficient.” “It’s just crazy.” “Part of our problem is decentralization.” Never seen anything like it. “It’s waste at the administrative level.” “We don’t even know how many faculty we have”.

Very excited in working with Senate – but under our constitution that is limited to academic matters. “Very very important that as we move forward that we respect the separation of powers.” Senate should not be legislating about athletics.

Too critical a moment for us to seek out issues that divide us.

“I need you, I want you, I implore you to be partner as we move forward.”

Dellabough: How do we navigate academic matters split when things like working conditions impact academics?

Schill: Tough to draw line. Degrees, curriculum, most admissions decisions. [Like admissions of athletes that don’t meet normal academic standards?] On other issues you may have strong views,but not full information. If you send me legislation like that athletics stuff, I’ll just turn it back. I’d encourage Senate not to use resolutions and legislations to challenge me. Challenge me to my face instead. I’m not afraid of engaging.

Cramer: We’ve had a huge push for online classes. Really hurts quality. I think Senate should take it up. What do you think?

Schill: Yes. Can be good, can be done badly. Usually is, but not always. Might help us reach graduation goals. Senate should take this up.

Bonine: UO Senate includes students, staff, administrators. Senate’s jurisdiction is “academic matters as commonly understood”. We all agree on that. We all need to work together so that disagreements on this occur at the beginning, not at the end.

Schill: Agreed. Appreciate the fact that you gave 2 weeks notice on counseling confidentiality. That was very appropriate.

Price: With regard to 4-year graduation, do you foresee the administration getting involved in classes that have low pass rates?

Schill: “What are you doing to those poor kids” taking calculus? I’m going to be involved, Coltrane too. Get data first, collaborate on answers.

Dreiling: Second Bonine’s call for process to deal with disputes about definition of academic matters. Important from both directions. Senate needs to keep eye on what administration is doing. For example, the latest budget model? Consult with SBC?

Schill: We will consult, just not now at beginning of process. [Uhh,…]

All in all a refreshingly direct talk and back and forth with the Senate. He’s pretty funny too. Era of good feelings continues.

Follow the link for all the slides, I’m listening not blogging. 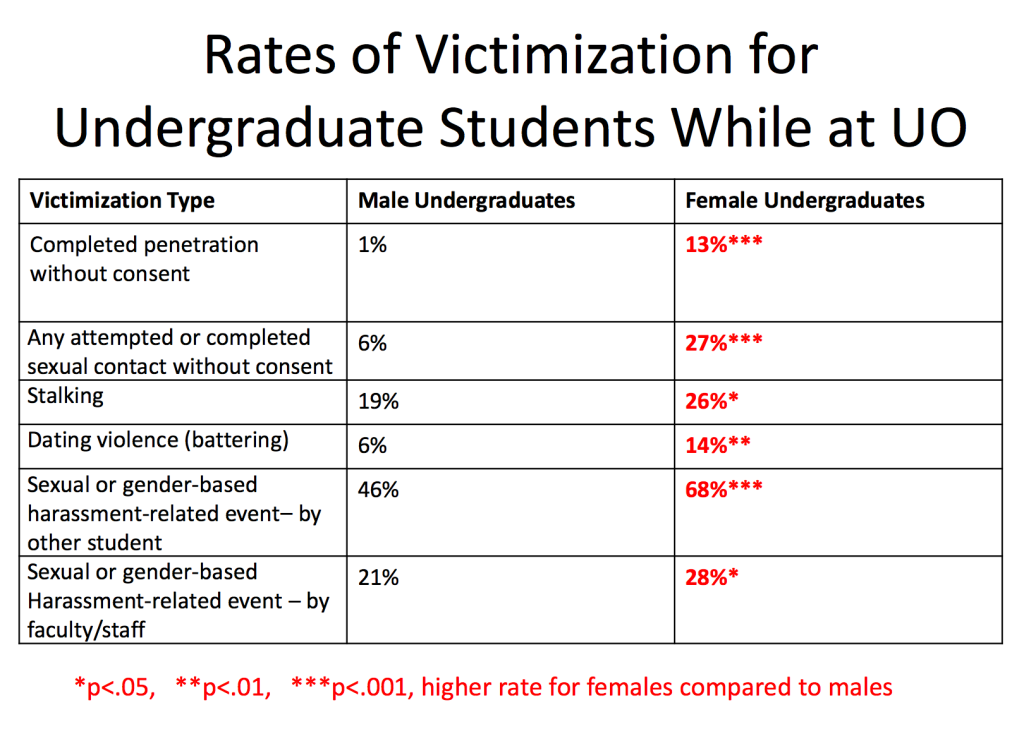 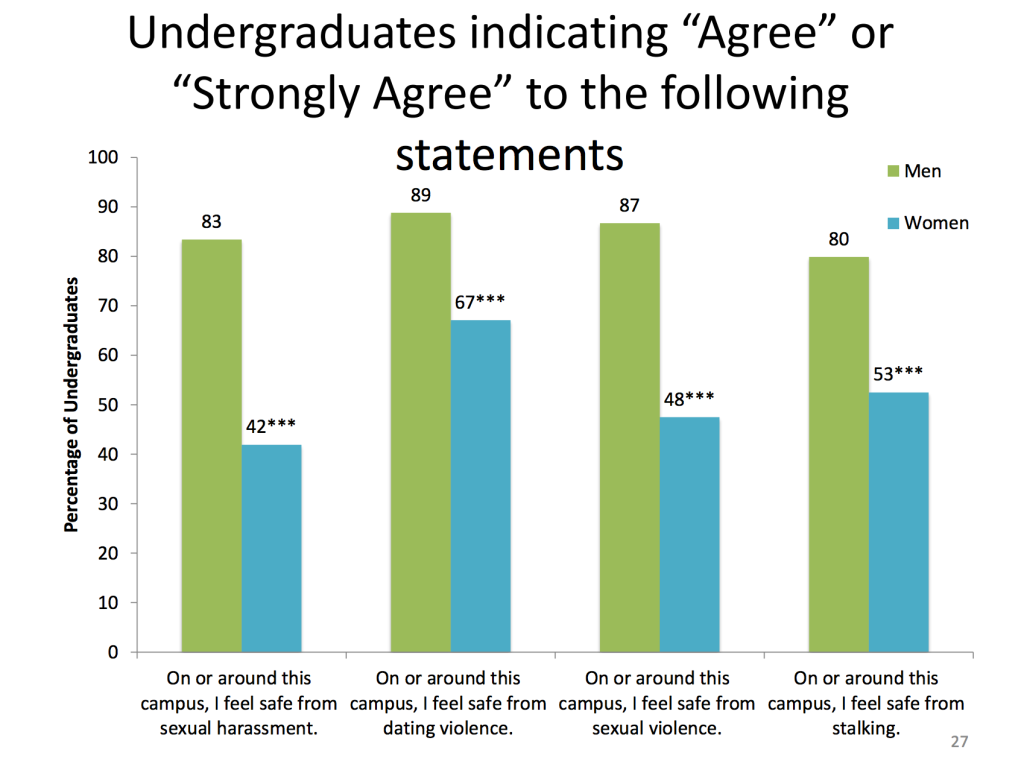 DeSautel: Notes high degree of reported harassment of graduates students, including harassment by faculty. UO has a problematic policy on this. [Not to mention enforcement, from the notoriously incompetent AAEO Director Penny Daugherty.]

Stabile: Last night was “bid night” for the fraternities and sororities. We tried to move this back til later in the year. Simple change. We failed, despite a year of work. This failure is on all of us.

S.1      [SUSPENSION OF RULES] Motion (Resolution): In Support of UCC Survivors and a Call to Action Regarding School Violence; Robert Kyr, Immediate Past President of the University Senate

1.1 WHEREAS one week ago, on Thursday, October 1, 2015, a horrific shooting at Umpqua Community College in Roseburg, Oregon (70 miles to the south of the University of Oregon) resulted in the deaths of one faculty member, eight students, and the shooter, who was a UCC student [Please see “Background” below.];

1.2 WHEREAS we have a history of experiencing serious incidents of violence in the Eugene-Springfield community, such as the Thurston High School shooting on Thursday, May 21, 1998, as well as other violent behaviors, such as sexual violence in our university community, and other reprehensible forms of aggression and assault;

1.3 WHEREAS, regrettably, these deplorable events are not being covered by the media nor discussed in public forums in an ongoing, substantive manner that will lead to meaningful action to prevent violence in our schools and in our learning communities;

2.1 THEREFORE, BE IT MOVED that the University of Oregon Senate offers its deepest sympathy and condolences to the families of the victims, and to the survivors of the UCC shooting and to all those whose lives have been directly affected by this tragedy;

2.2 BE IT MOVED that the University of Oregon Senate expresses its gratitude to University President Michael Schill for his quick and compassionate response to the shooting, in particular, by offering support to the families of the victims and to the survivors through University of Oregon services on an ongoing basis [Please see President Schill’s letter under “Background” below.];

2.3 BE IT MOVED that the University of Oregon Senate encourages President Schill to continue to offer services to the families of the victims and to the survivors of the UCC shooting for a considerable period into the future, since the healing process is lengthy and continuing support by institutions that have professional resources is essential and greatly needed;

2.4 BE IT MOVED that the University of Oregon Senate charges Immediate Past President Robert Kyr to pursue effective vehicles for ongoing substantive discussion and meaningful action regarding the urgent topics covered above, in particular, through the offices that he currently holds in the Oregon Interinstitutional Faculty Senate (IFS) and the PAC12 Academic Leadership Coalition, and through engaging the UO Senate in the process of addressing these crucial matters for our university community, as appropriate.

Postponed to next meeting due to shortage of time.

Several, but I forget details.