Marcus attempts to dispel rumors, but budget is still opaque

2/2/2016: I’ve pasted the only actual budget information that was in the budget memo at the bottom. Where are the numbers showing the trends in the CAS budget, and where is the info showing where the money taken out of CAS has been going and where it will go? The $4M CAS deficit noted below is the result of changes in how Brad Shelton’s budget model allocates money, and the many side transfers that have been made outside of that model. But that data is no longer being updated – and the old data seems to have been taken down.

Someone has these numbers. Why aren’t we being shown them?

Re: The college budgeting process and rumors

I am writing to update you on the college-wide budgeting process and – I hope – to dispel some rumors that I am hearing from some quarters. As I noted in my memo of January 13, 2016 (https://casweb.uoregon.edu/budget-memo), CAS needs to reduce its $4M operating budget deficit while also aligning its resources to meet the strategic priorities outlined by President Schill (https://president.uoregon.edu/content/aligning-our-resources-support-academic-excellence).

In CAS, this has meant growing our Ph.D. numbers and
tenure track faculty lines (we have 22 searches underway to fill replacement and new lines), while reducing staffing in the dean’s office and seeking ways to align teaching resources in CAS departments with instructional needs. This last measure means that we are reducing the total number of non-tenure track faculty lines, which – of course – creates uncertainty for people in those positions.

To be clear, we are continuing to follow the process I outlined in the January 13 memo. This means we are having budget conversations with every department and program in the college. None of us is happy about reducing budgets, but they are necessary conversations. The way these meetings work is that we (the dean’s office) propose possible reductions based on student numbers and other pedagogical, departmental and college-wide considerations. Department heads and managers often provide alternatives to our proposals, which leads to a conversation (sometimes heated debate) about alternatives to achieve the results. I have been adamant that alternative solutions brought forward by a department must achieve the same on-going cost reductions – unless an argument can be made for a compelling institution-wide need that trumps the need to reduce the deficit and grow TTF numbers.

Regardless of the particulars of any one program, we are adhering to the same principles I outlined in the January 13 memo. But let me dispel a few things I’ve heard circulating:

 The dean’s office is still having conversations with departments about proposed cuts; nothing is finalized at this time. In most cases, these conversations have changed some of the outcomes we initially propose. In departments with dramatic enrollment declines, however, there may be few (if any) alternatives that a department can offer to our proposal to align instructional staffing with student demand. I acknowledge those conversations can feel one-sided to the department and we remain open to alternatives, if any can be found.

 Final decisions for all departments will be made only after review of our recommendations by central administration and a meeting with United Academics to ensure that our processes are in compliance with the Collective Bargaining Agreement. I hope – but cannot guarantee – that we will have final decisions by the end of February. It is my goal to give all affected employees as much time as possible to plan their future.

 Reductions in personnel numbers will be achieved only through contract non-renewals. We are not doing mid-term contract terminations or severing of MOUs.

 Also we are not terminating tenure-track faculty. Much of the reason for pursuing these painful budget decisions is to support growth of TTF lines, as evidenced by our ongoing searches.

 We are not terminating any departments, nor have we ever contemplated this measure.

 We are not reducing overall GTF numbers in the college, although some departments will see declines (and others will see increases) as we move instructional GTF support from low-enrollment to higher-enrollment units. Moreover, with the additional Ph.D. fellowships offered by the Graduate School, we hope to achieve growth in Ph.D. numbers in the year to come.

 All colleges, schools and administrative units within the university are being asked to go through a similar budget process. CAS is not being singled out in this process, although the process differs between units. For example, administrative units at UO have been asked to develop plans for a 2% budget reduction. In CAS, however, we have a specific monetary target, which is to eliminate our $4 million deficit. We are doing this by realigning instructional resources with instructional demand, which means that some units are taking a greater than 2% cut, while others are experiencing a smaller reduction. I know that times of uncertainty can be exceptionally difficult, both emotionally and professionally. This was my reason for detailing at the January 13 CAS heads and department managers meeting the financial history that has led us to this point and the specific principles for moving through this time, principles which include transparency and consistency. As you hear of “decisions that have been made” or “cuts that are happening,” please go back to the memo after the January 13 meeting and review its content (https://casweb.uoregon.edu/budget-memo). I pledge to adhere to the processes and principles outlined in that document; whatever else you hear is speculation at this time.

As a final note, I want to acknowledge the difficult work that our department and program heads are doing in this process. They have been articulate advocates for their programs, their employees, and their disciplines; it is clear they are willing to put themselves on the line for all of you. I hope you will give them the thanks and deep respect they deserve as we work through this process. I am proud to count them as colleagues.

From the budget memo:

Achieving our research and instructional goals has been complicated by the significant budget shortfall that CAS has carried for the last two years, something we have discussed many times in meetings with heads, faculty, and staff. At one point, our projected annual operating deficit exceeded $12 million. Thus far, we have been able to avoid major reductions by using carry forward funds. In addition, central administration has worked with the college to shift funds to CAS. In the past year alone, our central administration has authorized a permanent, recurring budget augmentation of $7 million per year, provided a one time transfer of $4M to our budget, altered the budget model to add SCH-based funds to all school and colleges, and helped CAS remove major costs centers (startups and high performance computing) from our budget. Even with these measures, however, we face a projected deficit of about $4 million in the 2015-16 fiscal year. We therefore need to implement cost-savings measures in order to balance the budget in future years.

There used to be very clear data on the budget model and side payments:

But while CAS faculty are being laid off, Provost Coltrane is increasing the general fund subsidy for athletics – his budget for the Jock Box subsidy is up 39% since 2000, including  another 7% this year: 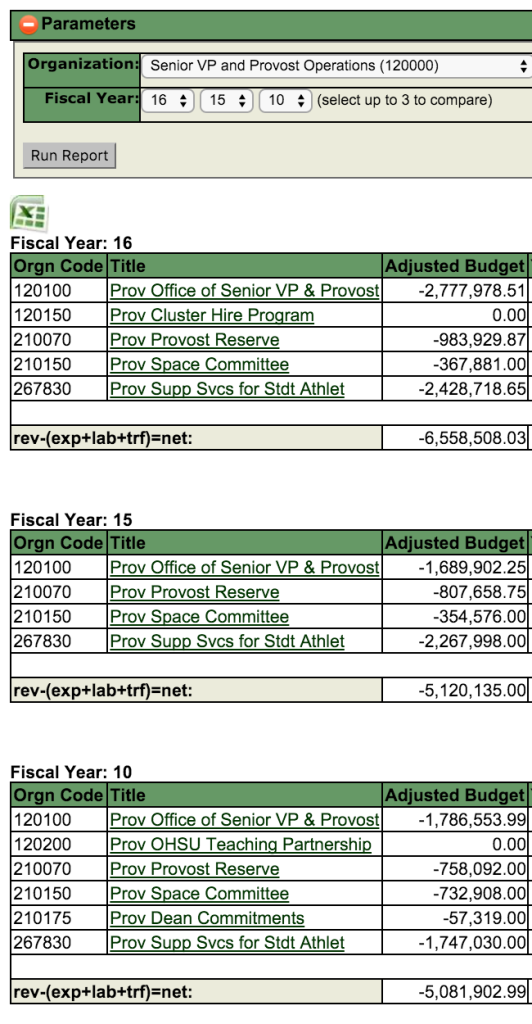 26 Responses to Marcus attempts to dispel rumors, but budget is still opaque