7/13/2016 update: Reporter Max Thornberry has the report in the Daily Emerald here. A snippet:

The ombuds office did not investigate the office itself and only makes notes of patterns of perception, according to the report. Former ombudsman Bruce McAllister did note however that, “perception does not necessarily equate to fact, but patterns are important to the acceptance and long-term efficacy of any particular program.”

6/29/2016 update: Penny Daugherty’s AAEO website finally has been updated with a link to the correct administrator for reporting child abuse. But the link for reporting discrimination and sexual harassment still takes you to a pdf (below) that is years out of date and does not mention the new Title IX Coordinator, Office of Crisis Intervention, etc. Other AAEO pages and links also still describe procedures that are years out of date, and policies that are no longer in effect.

That’s right, the UO office that is responsible for complying with federal laws on discrimination and harassment can’t even point UO students, faculty, and staff to the current UO procedures and policies for complying with those laws. Does anyone except Johnson Hall still have confidence in AAEO Director Penny Daugherty?

6/23/2016 update: Four weeks after I emailed her about it Affirmative Action Director Penny Daugherty’s website still has incorrect info about reporting sexual assault and harassment. Need to report child abuse? Her office will refer you to someone who no longer works at UO.

At this point no one should be surprised by the continued incompetence of AAEO Director Penny Daugherty. President Schill’s emergency policy requiring mandatory reporting has been in effect since February 18th. Full policy here. The gist:

The UO Senate’s SGBV committee has worked for 6 months to develop a permanent version of this policy. The Senate has had three very public debates on the question of mandatory reporting to Ms Daugherty’s  office. It’s been all over the papers. And yet Ms Daugherty’s AAEO website still manages to get the basics all wrong: 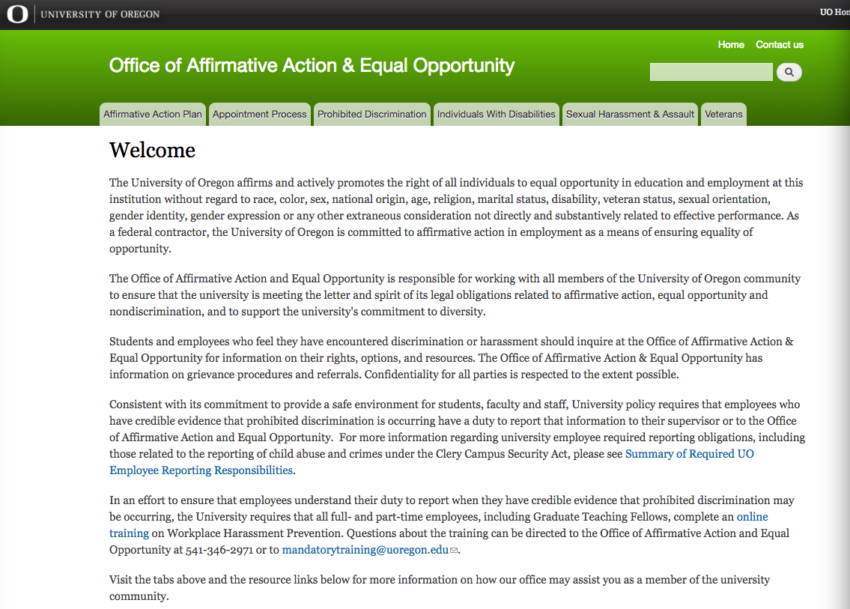 Consistent with its commitment to provide a safe environment for students, faculty and staff, University policy requires that employees who have credible evidence that prohibited discrimination is occurring have a duty to report that information to their supervisor or to the Office of Affirmative Action and Equal Opportunity.

That’s not true.  Since February, UO policy has said that students should go to the Title IX coordinator or the Office of Crisis Intervention, and not to Ms Daugherty.  Why was this job taken away from her? I don’t know. There have been two external reviews of AAEO in the past year, but UO’s General Counsel will not make them public.

Confidentiality for all parties is respected to the extent possible.

That’s deceptive. AAEO’s ability to respect confidentiality is quite limited, and in fact AAEO’s responsibility is to protect the university, not the victims. Here’s the language from the proposed new policy, which was approved by the General Counsel’s office:

Employees should be aware that AAEO is tasked with ensuring compliance with this policy and state and federal law. Therefore, while AAEO will work with employees, students and campus community members to ensure that they understand their complaint options, are protected from retaliation and are provided with interim measures as appropriate, AAEO employees are not advocates for individuals participating in the process.

The UO Ombuds Office is one place that can really guarantee confidentiality. AAEO doesn’t even mention them. And if you follow the prominent links on the AAEO website, the incorrect information just gets worse:

For more information regarding university employee required reporting obligations, including those related to the reporting of child abuse and crimes under the Clery Campus Security Act, please see Summary of Required UO Employee Reporting Responsibilities.

Really. That link starts with this: 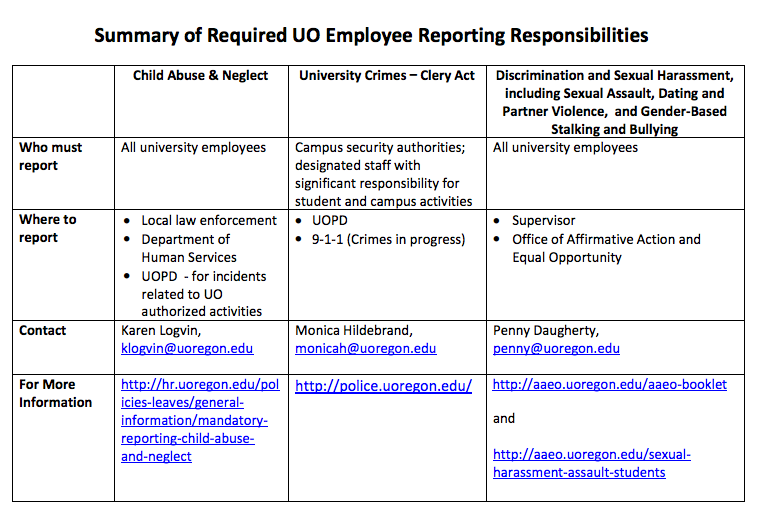 That information is obsolete, wrong, and dangerous. The document is from January 2014, two years before the current emergency policy was put in place. It’s incorrect about where to report sexual harassment directed at students. Do you need to report child abuse? Our Office of AAEO will send you to the email address of someone who no longer works at UO.

OK, maybe the prominent link on the AAEO homepage to this glossy brochure will lead to better information? No, that brochure is also years out of date. As in five: 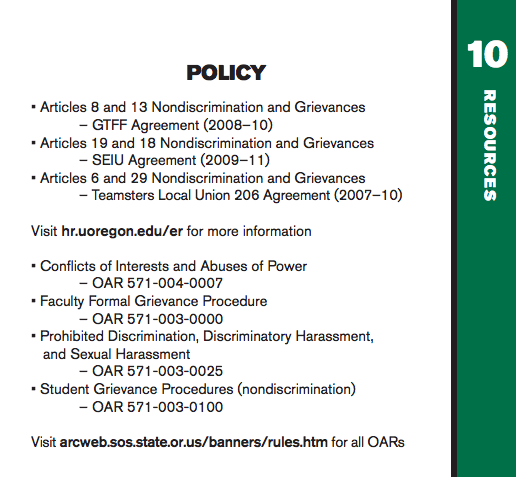 OK, try AAEO’s tab for Sexual Harassment and Assault. This will take you to a different version of the AAEO brochure, with different information. Different, but also wrong. As one example, AAEO says that if you have a “facilitated conversation” with them, “the participants retain control over the outcome”: 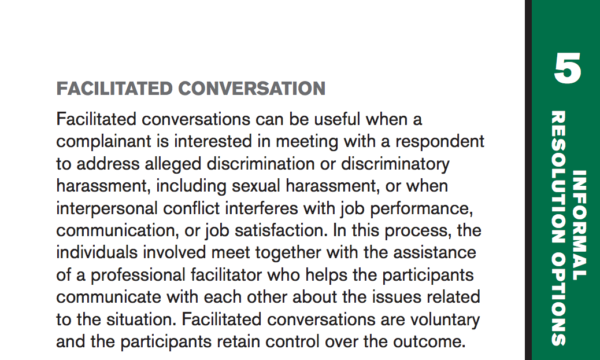 No they don’t. AAEO employees are mandatory reporters. So suppose two faculty come to AAEO for a facilitated conversation to talk about some issues in their department. During the conversation, the AAEO facilitator decides that these issues include credible evidence of sexual harassment. Under current UO policy the facilitator would be obligated to report, and perhaps initiate a formal grievance process. This process could easily lead to the alleged harasser learning the identity of the people who had come to AAEO, to have what they had thought would be a conversation in which they could “retain control over the outcome.”

This isn’t just my interpretation, it’s the interpretation of one of AAEO’s own facilitators, who agreed that in this sort of situation it would be better to go to the Ombuds office. So why won’t AAEO say that publicly? I don’t think it’s a conspiracy. It’s just incompetence. Many long years of it.