UO provides safe space for anonymous comments about IT reorganization 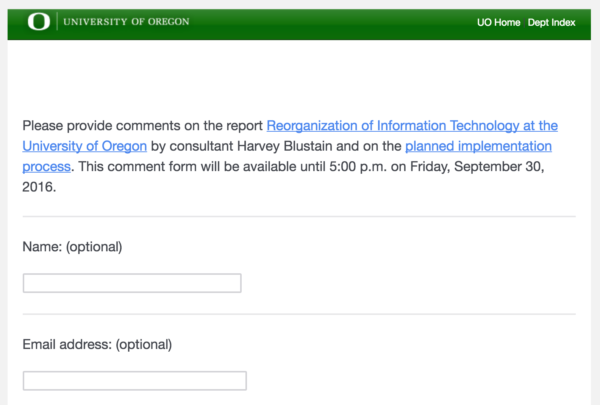 Thanks to IT consultant Harvey Blustain’s (draft) report, we’ve now got a more expansive definition:

Reorganization will achieve only so much without a fundamental shift in how the university thinks about and manages IT. The IT enterprise needs to escape from the “Oregon way,” a culture of poverty characterized by short-term planning, incremental and tentative investments, organizational parochialism, and diffused authority. In its place, IT has to become a strategic resource characterized by rigorous analysis and planning, coordination, senior sponsorship, and a view to the success of the institution.

The icon of the Oregon way is “pass the hat.” In the absence of institutional funding, budgets for many projects are assembled by contributions from interested units. The process, in addition to calling attention to differences between have and have-not units, has several pernicious effects.

First, “pass the hat” masks the true scale of the project. A budget number based on analysis of total cost of ownership and replacement costs would seem staggering. A smaller number is easier to sell than a larger number, and so there is a common agreement to avoid looking beyond the first installment. Pass-the-hat funding sometimes requires multiple rounds of discussions that can extend for years. If a group decides to drop out, it raises the ante for the others and can create bad feeling.

People who have been at UO a while cited a string of projects that generated initial enthusiasm, got a little traction, and then petered out. Short-term thinking inhibits analysis. With tentative funding and a fragile consensus, the incentive is to get started before the opportunity dribbles away. As a result, many of the fundamental tools of resource management business analysis, requirements gathering, project planning — are missing. If you haven’t done the analysis, you can’t manage resources over the long term. As a result, there is no sustainable funding, one-time monies must be found each year, there is little thought of refresh policies, and there is no support for equipment at end of life.

Insecure and incremental funding inhibits a sense of enterprise. Units cooperate in endeavors because it suits them and cooperation (i.e., continuing to put money in the hat) ends when it doesn’t. They solve their own problems, often in the cheapest way they can, with secondary regard to institutional financial stewardship. These decisions can have long-term effects, because as one IT Director said, “If you give people 300 choices, you have to support them all.”

Distributed funding diffuses authority and encourages inefficient decision-making. Everyone has a say, units can opt out, and no one is in control. No one says, “You can’t do that.” Among my more interesting conversations were those dealing with CIO authority. Does the CIO have the authority, for instance, to intervene in a unit’s decision to pursue a CRM solution? Or to mandate the use of Exchange for everyone? Or limit choices of hardware for standard use?

Opinion was split, but more people in the distributed units said ‘yes’ than I would have imagined. I also found surprising the number of people who expressed a desire for more central direction, mandates and leadership. Perhaps that is something one says to a consultant, but I did sense that many people across the university want to rationalize the use of IT resources even if it means curtailing their freedom of action.

The danger of cultural configurations like the “Oregon way” is that they start as an adaptation to resource deprivation and then become the accepted way of doing business. IT professionals across UO have done the best they can in an environment that has fostered short-term and parochial thinking and in the process they have lost the skills of project management, total-cost-of-ownershio budgeting, and the institutional stewardship of scarce resources.

A UO Matters operative was able to capture the executive summary. If anyone has the full pdf or a link, please send it along. 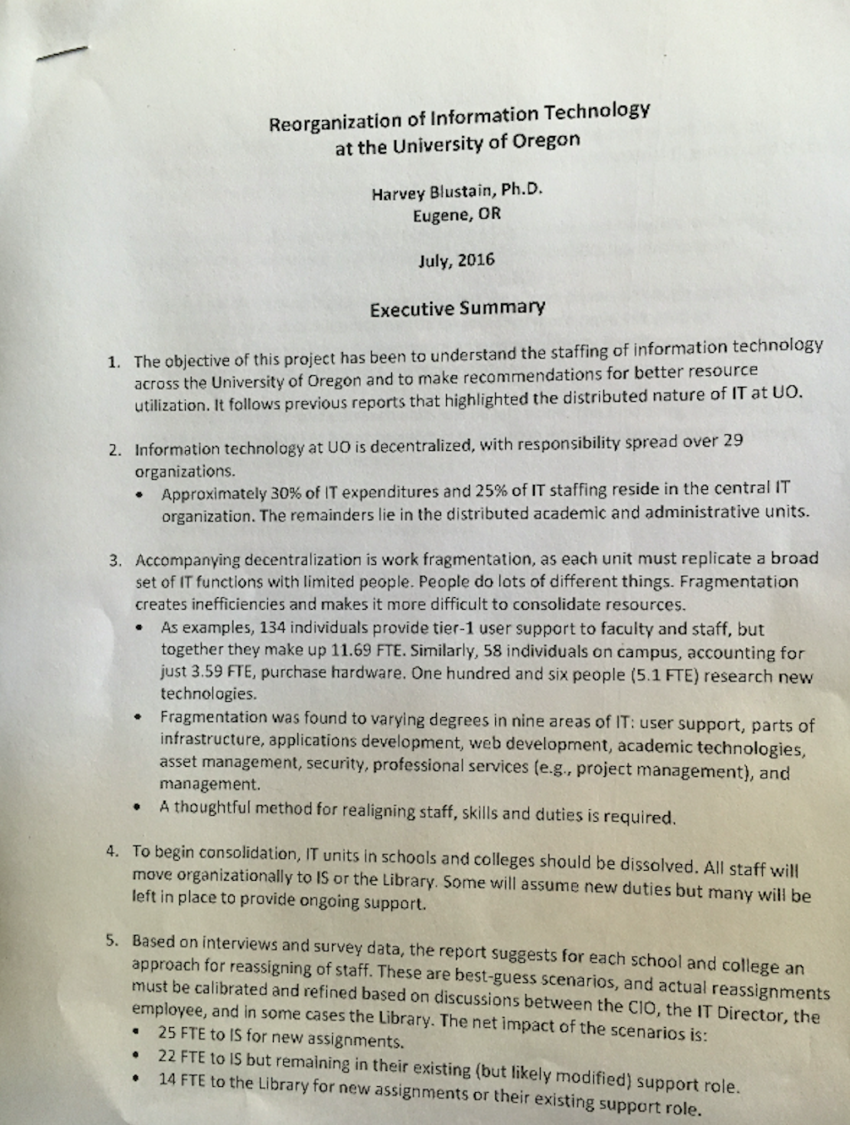 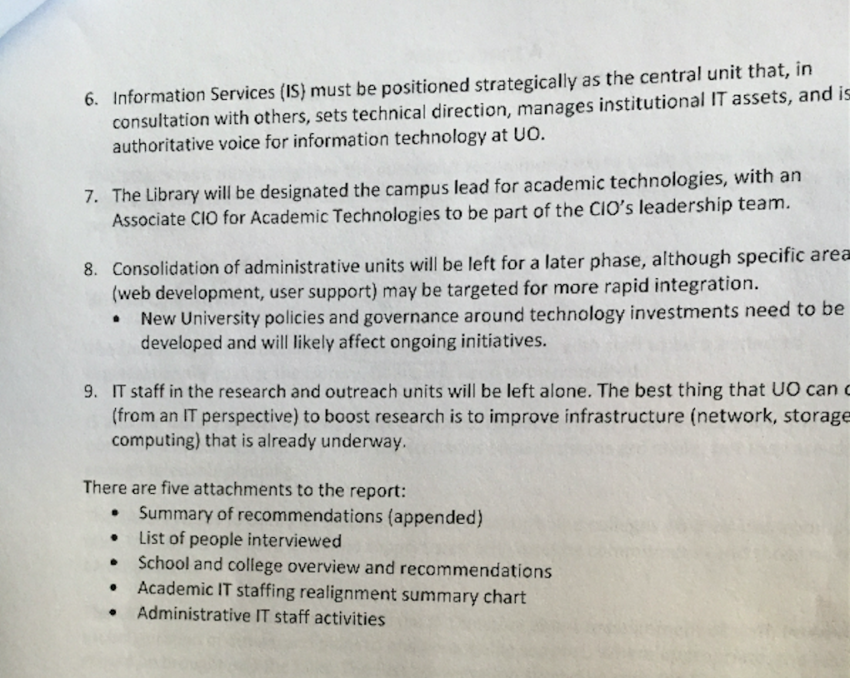