An excerpt from Pres Schill’s letter:

As I have already noted, we will do everything we can to shield our most vulnerable
students from the impact of this proposed tuition increase. The PathwayOregon
program continues to provide full tuition and fees to about 2,000 Pell Grant–eligible
resident students on our campus, including more than a third of our first-year resident
students. [UOM: Thanks in part to the generosity of Trustee Connie Ballmer.]
We have also made significant progress toward achieving the goals set when
we announced the Oregon Commitment in 2015, which provides advising, planning,
and academic resources to help every student at the university graduate in a timely
fashion. To every extent possible, we intend to maintain the integrity of those important
efforts. 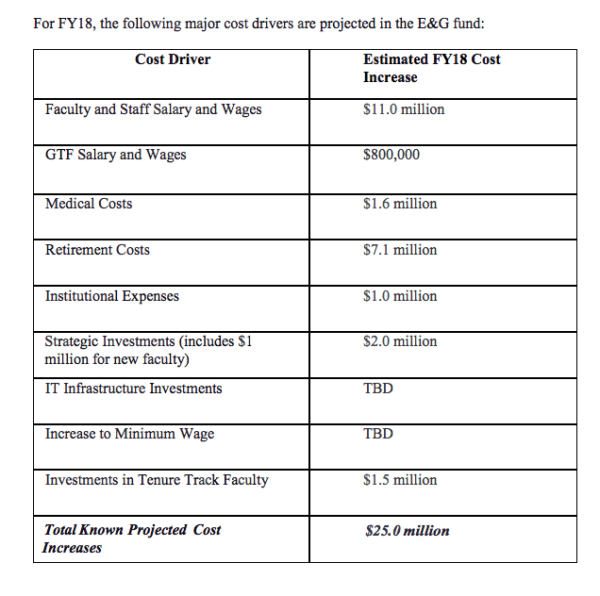 Despite that $11M salary increase – a good chunk of which goes to upper administrators – UO faculty pay is getting worse, relative to our comparators:

No differential tuition for B-School this year, and the in-state tuition increases will be bought down if the legislature coughs up more money: 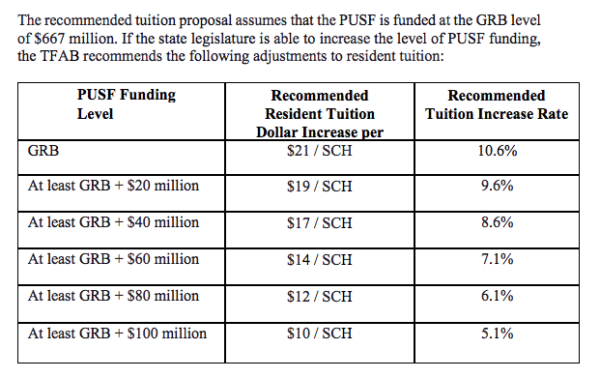 Full text of the letter:

To University of Oregon community members,

Pursuant to university policy, the provost and I have received the recommendations of
the Tuition and Fee Advisory Board (TFAB), a body containing students,
administrators, and members of the faculty and staff. Among the recommendations is an
increase in tuition of $21 per credit hour—or $945 per year—for in-state undergraduate
students. The TFAB recommends the same increase for out-of-state undergraduates
students of $21 per credit hour, or $945 annually. For the 2017–18 academic year, this
equates to a 10.6 percent increase in undergraduate tuition for in-state students and a 3
percent increase for out-of-state students. The TFAB also recommended various tuition
increases for graduate tuition and a new technology fee of $50 per term.

I regret that I have little choice but to accept the TFAB recommendations on tuition and
fees for next year. Pursuant to university policy, I am posting the TFAB
recommendations together with this memorandum for public comment. After receiving
public input, I will forward my final tuition recommendation to the UO Board of
Trustees for consideration at its next regular meeting on March 2–3.

I wish it were not necessary for us to increase tuition by these significant amounts.
Although the vast majority of our lowest-income students will be spared from this
increase by the PathwayOregon scholarship program, for some students a $945 increase
will make attending the UO difficult or impossible. Yet the state’s fiscal problems leave
us no choice. Oregon’s disinvestment in higher education over more than two decades
has shifted the burden of paying for college from the state to our students and families.
In 2015, the state made some positive moves toward addressing this trend with an
increase in funding, which was greatly appreciated. The governor’s recommended
budget, however, keeping funding flat over the next biennium in the face of rapidly
rising costs, returns us to the previous status quo of disinvestment.

Only four other states in the nation provide less funding per student for higher
education than Oregon. That is simply unacceptable. Public universities in Oregon have
calculated that it would take at least an additional $100 million in state support for
public higher education to preserve core student services and financial aid. If we
received this amount we would voluntarily limit tuition increases to about 5 percent.
Flat funding may not sound like a reduction, but the university is forecasting very large
cost increases over the next couple of years—largely created by salary increases from
collective bargaining agreements and unfunded retirement costs. These increased costs
amount to roughly $25 million.

Even with the substantial tuition increases recommended by the TFAB, the university
will still need to close an $8.8 million recurring gap in our budget for next year. We
have already begun a process, aided by faculty members, administrators, and students,
to identify how we can create new revenue streams and/or cut expenses. Roughly 80
percent of our educational budget pays the salaries of our faculty, staff, and
administrators. Therefore, any efforts to cut the budget will inevitably lead to a loss of
jobs and pain to our community.

As we move forward, we will strive to protect the academic and research programs of
the university. Our goal will be to continue and accelerate the progress we have seen
over the past couple of years in enhancing excellence in teaching and research,
including investments in faculty hiring, research infrastructure, and support for student
access and success programs. Budget challenges will make this harder and may require
difficult choices, but we cannot and will not take our eyes off the pursuit of excellence
in all that we do at the UO.

As I have already noted, we will do everything we can to shield our most vulnerable
students from the impact of this proposed tuition increase. The PathwayOregon
program continues to provide full tuition and fees to about 2,000 Pell Grant–eligible
resident students on our campus, including more than a third of our first-year resident
students. We have also made significant progress toward achieving the goals set when
we announced the Oregon Commitment in 2015, which provides advising, planning,
and academic resources to help every student at the university graduate in a timely
fashion. To every extent possible, we intend to maintain the integrity of those important
efforts.

It is my hope that we can still avoid raising tuition by more than 10 percent and
reducing our budget through layoffs and attrition. I call on all of our constituents—
students, faculty and staff members, alumni, and friends—to join me in requesting that
the legislature and governor prioritize higher education and stop shifting the cost of
educating our future workforce to our students and their families. Over the next several
months I will be in Salem urging our lawmakers to remember that the future of our state
is being shaped in places like Eugene, Corvallis, and Portland. Please join me in that
effort.

If, collectively, we are successful, we can reduce the tuition increase. The TFAB
recommendation estimates that each $20 million increment in increased state funding
for public higher education would allow the UO to reduce the proposed resident
undergraduate tuition increase by roughly 1 percentage point. The full $100 million in
state support for higher education would result in a 5.1 percent recommended tuition increase
at the UO. Increases of state support would also reduce the operating cuts that
would be needed in the coming year. This would significantly help our students, their
families, and our employees.

Ultimately, we likely will not know how state funding for higher education will shake
out until June or July of this year, which is when state lawmakers historically approve
the budget for the next biennium. I will continue to keep the UO campus community
abreast of changes to our budget situation and the potential impact on the UO campus
as information becomes available.

I invite you to comment on the tuition proposal prior to my making a final
recommendation to the UO Board of Trustees. Please provide input using this form by
5:00 p.m. on Friday, February 17, 2017.

Thank you.
Michael H. Schill
President and Professor of Law