Bridgepoint’s stock is way up since the Trump election and his appointment of Betsy DeVos, who is busy gutting the Obama administration’s crackdown on exploitative for-profit universities. Bridgepoint owns Ashford University and the University of the Rockies. 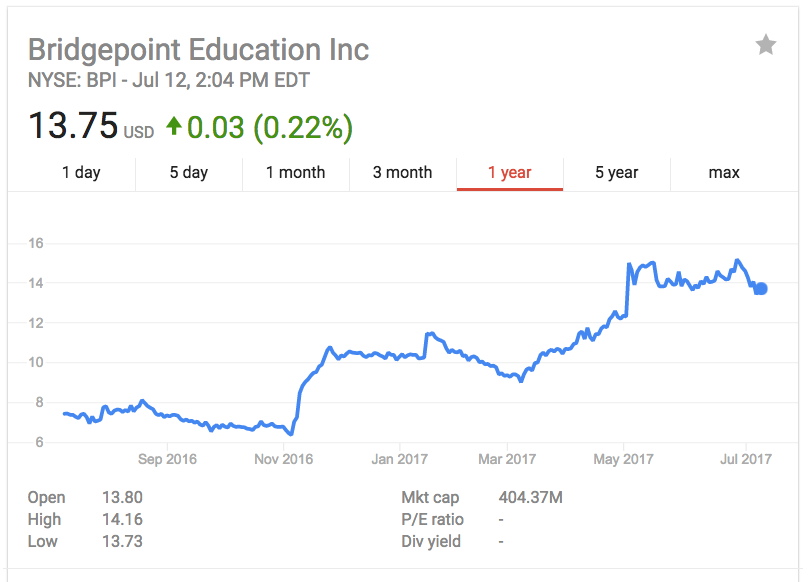 Appointment of George Pernsteiner as Director

Mr. Pernsteiner, age 69, has over 28 years of experience serving in several leadership posts in the post-secondary education system. Mr. Pernsteiner has been the President of the State Higher Education Executive Officers Association, which represents chancellors and commissioners of higher education from every state, from September 2013 until the present, and has announced his retirement as President effective as of August 1, 2017. Previously, Mr. Pernsteiner served as Chancellor of the Oregon University System from July 2004 through May 2013. Mr. Pernsteiner has a B.A. in Political Science from Seattle University and an MPA from the University of Washington in Public Administration.

In connection with his appointment to the Board and in accordance with the Company’s non-employee director compensation program, Mr. Pernsteiner will receive a base annual retainer of $45,000 for service on the Board. In addition, Mr. Pernsteiner is eligible to receive a stock option under the Company’s Amended and Restated 2009 Stock Incentive Plan, as amended, exercisable for a number of shares of Company common stock equal to the quotient of (a) $85,000, divided by (b) the Black-Scholes value of an option to purchase one share of Company common stock, with an exercise price equal to the closing price of Company common stock on the NYSE on the date of grant. Mr. Pernsteiner may be eligible for additional stock option and restricted stock unit awards that may be granted to the Company’s non-employee directors from time to time in the discretion of the Board and the Compensation Committee of the Board.