Sorry for the long post. Those who know the history should cut to the bottom for the new letter from the faculty.

The UO administration has a long history of making vague charges of bullying, harassment, and “incivility” against faculty who complain about administrative misfeasance and malfeasance, or otherwise question their leaders. They are trying it again on the Department of Architecture faculty. Those faculty are fighting back.

On Feb 15th the faculty held a department-wide meeting and voted by secret ballot, 20 to 9, to protest a series of decisions by their new dean Christof Linder. Full minutes here. The gist:

As one of the best known programs of architecture in the United States with a distinguished legacy of faculty, students and alumni going back over a century and to best serve our current and future students, the University of Oregon, the State of Oregon, and the profession of architecture:

–  the faculty of the Department of Architecture believe it is imperative to expeditiously create a School of Architecture at the University of Oregon that is autonomous and independent of the College of Design, and

–  the School of Architecture should oversee, direct, and manage all academic and budget matters within its purview on the Eugene and Portland campuses, and

The need for an independent School of Architecture is driven by the necessity to address at least 10 issues with the current structure of the College of Design:

One marvels at the level of incompetence it must take for a dean to let things deteriorate to the point where the faculty would find it necessary to organize such a meeting and then vote 2 to 1 against his leadership.

Three weeks later, on March 8th, Head of School Liska Chan held a meeting of the School of Architecture and Environment and doubled down. The notes from her speech, which do not address the substantive issues raised by the faculty, but which instead focus on accusations against them regarding their “tone” and “bullying”, are here. An excerpt:

Intentionally or not, this movement threatens our school, and impacts every one of us in it. To summarize my assessment of it I will say this: It is harming our reputation within the University. It is stalling some of, and impacts all of, the progress we are making. It is taking emotional energy away from building this place and putting energy into tearing it down. Moreover, some individuals in the department of Architecture (this includes some NTTF, some TTF, junior faculty, and leaders) have been excluded from these discussions—discussions that aspire to abolish the very School in which these individuals work!

I further object to the tone of this movement. I honestly do not see how any concerns are going to be resolved with the independence movement or under the divisive tone it sets. The brinksmanship it creates, whether intentional or not, creates a climate of fear. I have heard accounts of, and seen first-hand, that faculty members in architecture feel intimidated and silenced either through exclusion and/or hostility. I am talking about eye-rolling and other gestures of dismissal in faculty meetings, communications that imply that someone who isn’t with the movement “lacks courage”…snide comments behind people’s back –I’ve seen colleagues attempt to undermine other faculty members who stick their necks out and ask for clarity, explanation, and a voice for the less dominant voices in the room. I’ve seen gender discrimination. Let me be clear: the hostile work environment in Architecture is totally unacceptable.

This kind of behavior has NO PLACE HERE.

In my role as a faculty member in the department of landscape architecture for the past 17 years, I have been consistently treated with respect, trust, kindness and compassion. This is true even when I make mistakes, go against the grain, or disagree with my colleagues. Yet in my short time in this role I have seen some faculty members gas-lighting other faculty, some faculty members using abusive language, yelling profanities and making snide comments in faculty meetings. I have seen attempts to undermine others in the form of rumors, half-truths, and baseless claims. Again, this kind of behavior has NO PLACE in the School of Architecture and Environment. Regardless of what the argument is, what the conversation is, this behavior – this bullying – has NO PLACE in a professional environment. Period.

This speech was delivered to the architecture faculty – or those who stayed to hear it all – with Dean Linder watching from the back.

The next day, Provost Banavar sent a letter to the faculty, previously posted here. This letter repeated the themes in Chan’s speech and was presumably drafted by her. One snippet:

Finally, I would be remiss if I did not express my disappointment in the tenor of this conversation and the actions of some that have led multiple faculty members to express fears of retaliation and describe a hostile environment and bullying by their faculty colleagues. Such behavior – intended or unintended – is not welcome at the University of Oregon. It too must end.

Shortly thereafter Provost Banavar told the Department of Interior Architecture that he refused to approve the hiring of their top choice for a previously approved search.

Today faculty from architecture sent two letters to the Head, the Dean and the UO Senate and the faculty union eviscerating Chan’s speech and Provost Banavar’s letter, and making it pretty clear who has been bullying and retaliating against whom: 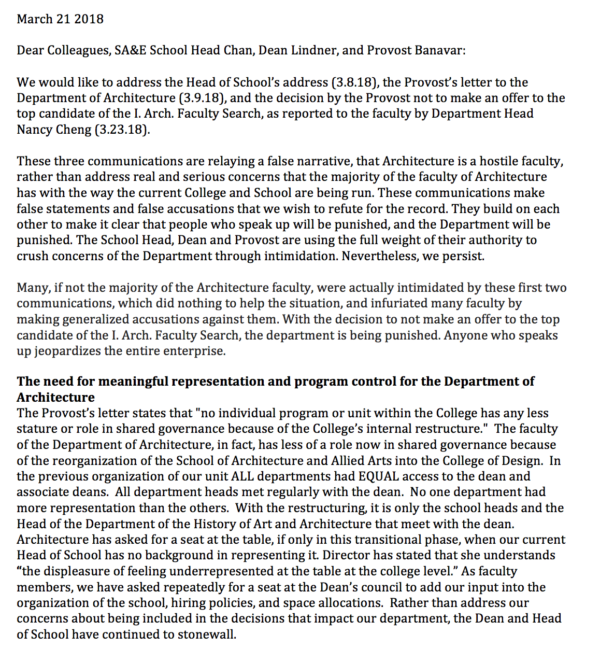 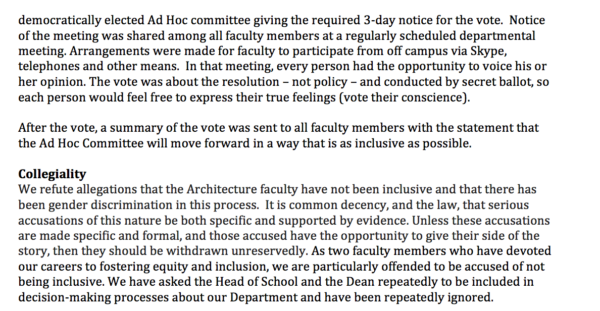 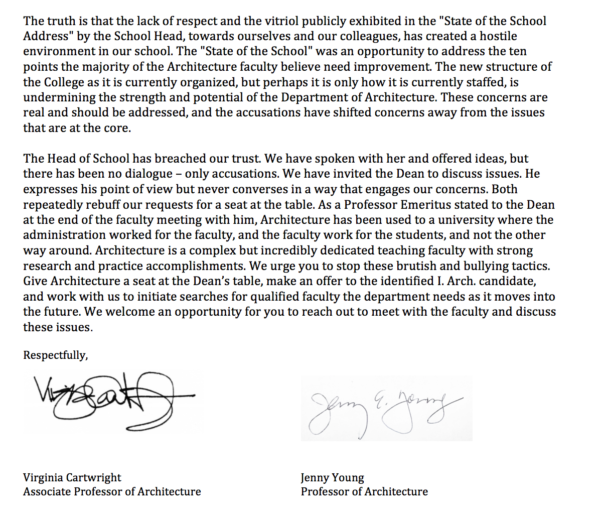 The second, longer letter is under revision as signatures are collected. It will be posted when available.