$10M Travel Oregon grant to Tracktown for IAAF 2021 held up over FBI investigation, lack of budget. No supporting letter from UO

7/27/2018 update:  The RG’s Austin Meek reports today that Travel Oregon is claiming the federal investigations into the awarding of the 2021 IAAF championships to Tracktown will not prevent Travel Oregon from giving them $10M in state funds:

“It is Travel Oregon’s perspective, barring DOJ counsel to the contrary, that language included in future contracts referencing ‘pending investigations’ relates to any investigations in which the successful applicant/awardee is named as the subject or otherwise included as one of the subjects of that investigation,” [Travel Oregon spokesperson Linea Gagliano] said in a written response provided to The Register-Guard.

The Oregon DOJ declined to comment. Meanwhile there’s still no budget for how Tracktown/Oregon21 proposes to spend these state funds.

7/25/2018: Back in early 2016, after some serious log-rolling and arm-twisting, the Oregon Legislature passed a bill to raise the hotel tax and have the Oregon Tourism Commission, a.k.a Travel Oregon, run a grant process to give Vin Lananna’s Tracktown at least part of the $25M in public money that John Kitzhaber and Kate Brown had promised them. For a taste of the politics, here’s Saul Hubbard in the RG:

When Vin Lananna, president of TrackTown USA, and Paul Weinhold, president of the University of Oregon Foundation, first contacted then-Gov. John Kitzhaber in mid-2014 to request a $40 million state subsidy for TrackTown’s bid to hold the 2019 track world championships in Eugene, they were met with coolness and skepticism, newly released emails show.

After Lananna gave an in-person pitch to Kitzhaber on July 7, Kitzhaber economic policy adviser Vince Porter sent a scathing assessment of the request to the governor and his top advisers.

Talks should continue, Porter wrote, but “there are a lot of hurdles to get over before it becomes much more than a pipe dream.”

Nonprofit TrackTown’s request contained “probably as much as $20 million that we would never want to consider subsidizing,” he added. “I don’t think the state should be even considering something larger than $20 million” to help fund the event in Eugene, he wrote.

The subsidy request — which would require three-fifth votes in both chambers of the Legislature — also was met coolly by Salem’s two most powerful legislators, Senate President Peter Courtney and House Speaker Tina Kotek, both Democrats, Porter’s emails indicate.

Yet, only five months later, Kitzhaber publicly pledged to “use all the means at my disposal to deliver the financial support needed for the championships” in a video message he sent — along with then-Secretary of State Kate Brown — with TrackTown’s team to the International Association of Athletics Federations bid meeting in Monaco in late November.

For the first time in that video, Kitzhaber endorsed a specific amount: the full $40 million. Getting the governor to publicly state the $40 million was a priority for TrackTown, Porter’s emails show.

What happened between Kitzhaber’s initial resistance and his endorsement? His campaign coffers were swamped to overflowing with donations from people who want the track world championships held at the UO’s Hayward Field.

The emails show that Kitzhaber’s apparent reversal coincided with almost $400,000 in campaign contributions he received during a 42-day period in September and October 2014 from athletic apparel giant Nike, its co-founder Phil Knight and its CEO Mark Parker, as well as four members of the UO Board of Trustees. …

The legislation eventually passed, and on Dec 5th 2017 Travel Oregon voted to award Oregon21, Tracktown’s for profit subsidiary, $2.5M over the next 4 years for the IAAF 2021 championships.

Shortly afterwards, the NYT broke the news that the IAAF’s decision to award the 2021 championships to Tracktown was the subject of a federal investigation. The Oregon DOJ has been sitting on the Tracktown contract ever since, refusing to approve it.

Travel Oregon wouldn’t give me a copy, but the Oregon DOJ was happy too. Full doc here: 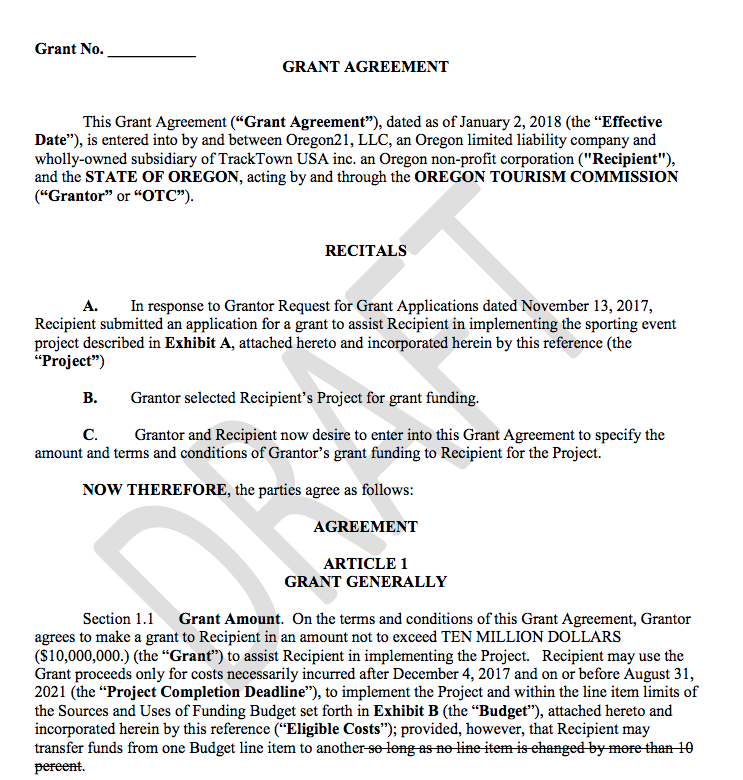 The contract goes on to say:

And the draft ends with a space to write in any exceptions: 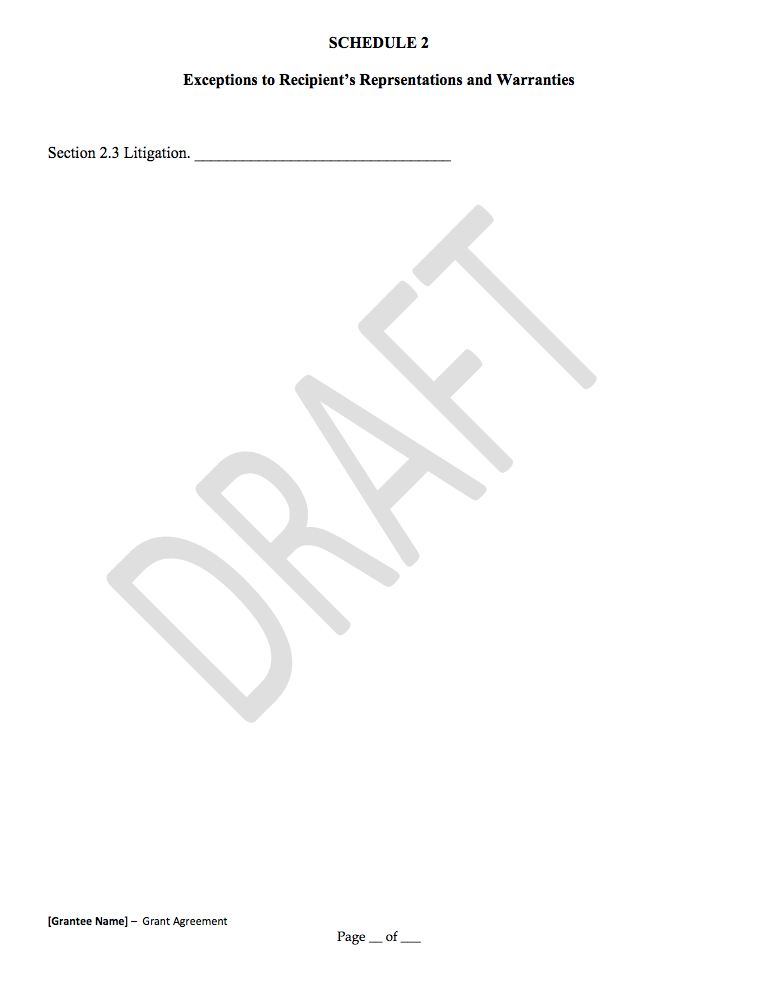 Perhaps Lananna’s resignation as head of Tracktown and Oregon21 will make it possible for the DOJ to now approve this contract. However, Travel Oregon did not give the DOJ a copy of Tracktown/Oregon21’s application or the proposed budget for spending this $10M in state funds. The full 200 page glossy application is here. They’ve got letters of support from everyone except UO, and the application barely mentions UO. Weird. 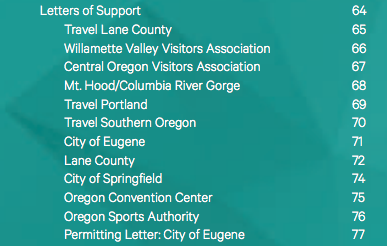 200 pages of fluff, and this is the only budget info: 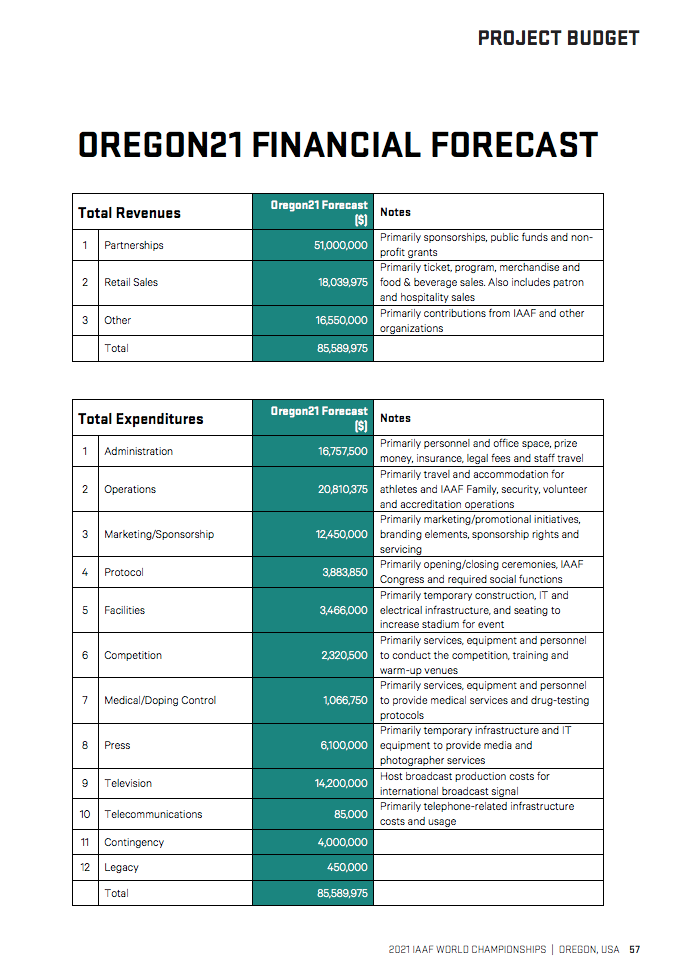 This “budget” is for the event as a whole, not the proposed $10M in state funds, and gives no explanation of how this $10M contribution will be spent. I asked the Travel Oregon spokesperson about this – with a cc to the DOJ – and got this reply: 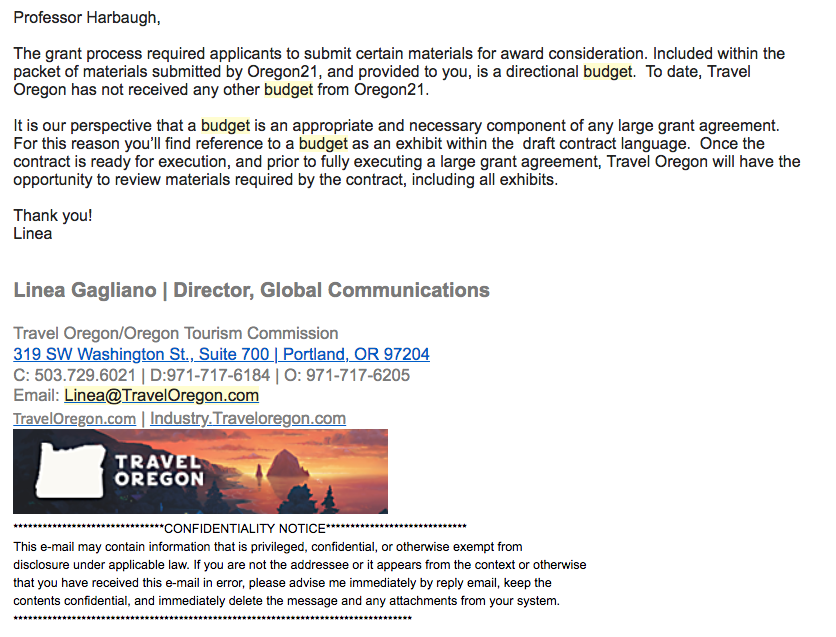 The Oregon Tourism Commission received 15 applications for these large grants, but its staff only recommended funding for this one. The commission members asked some skeptical questions of Tracktown’s Michael Riley and Vin Lananna:

Really? The next day the commission voted to give them the $10M. They still haven’t got a cent of it though, thanks to the Oregon DOJ.

2 Responses to $10M Travel Oregon grant to Tracktown for IAAF 2021 held up over FBI investigation, lack of budget. No supporting letter from UO