That would be the University of Maryland. The WaPo:

Maryland released copies of the subpoenas Friday, along with a statement asserting the university had already sent back all relevant records, and had found no evidence of any violations of NCAA rules or federal laws by any Maryland coaches, employees or players….

Presumably, the feds were investigating Bino and Silvio on charges that they failed to compensate their players for their work hours, i.e. wage theft. While there are employers stealing from employee checks, it is good to hear that UMD has provided the grand jury with evidence that their “student-athletes” were in fact, paid.

I wonder when UO will release its subpoena? UO GC Kevin Reed’s public records office charged Daily Emerald reporter Michael Tobin $113.64 for copies of any federal subpoenas UO had received (there’s presumably one for the IAAF 2021 Championship bid docs too) and then refused to hand them over, and then refused to give him a refund. Max Thornberry had the story in the EW:

General counsel for the university Kevin Reed, a member of the transparency committee, refused to attend Thursday’s meeting and resigned from the committee before the meeting, telling Harbaugh that his office’s participation in the committee would “present a conflict of interest.”

[In an obvious self-contradiction, Reed then appointed Bryan Derringer, an AGC from Reed’s office as his designee.]

… In addition to stepping down from the committee, Reed expressed concern that Harbaugh’s participation presented a conflict of interest as well. Transcripts of emails between Reed and Harbaugh were posted to the University Senate blog.

“You have been assessed over $45,000 in fees on your public records requests over the course of the last five or so years,” Reed wrote to Harbaugh in an email. “You have paid a few hundred dollars for documents, but mostly you have protested the fees and argued for a change in fee policy that would reduce or eliminate fees. A private citizen is, of course, free to engage in such advocacy, but when a public official does so in his official capacity, he does so at his own risk. I have told you this before, and you have ignored my advice thus far. And, as I said the risk is on you, not the university, so I can’t tell you what to do.”

Following Reed’s prompting to consult with the Oregon Government Ethics Commission, Harbaugh says, an investigator from OGEC – via a phone conversation – determined Harbaugh’s interest in public records makes him part of a class or group of people with shared interests, saying, “Your participation would not even be a potential conflict of interest.”

(a)An interest or membership in a particular business, industry, occupation or other class required by law as a prerequisite to the holding by the person of the office or position.

(c)Membership in or membership on the board of directors of a nonprofit corporation that is tax-exempt under section 501(c) of the Internal Revenue Code.

Why did the General Counsel’s office omit this important qualification?]

… “This is symptomatic of the university’s contempt for public records law and the principle that people should have access to the records of their government,” Harbaugh says. “This seems to me a case where the university is using its powers under that law not to promote transparency but to try to hide things.”

I don’t know what UMD charged for releasing these public records, but here’s their subpoena: 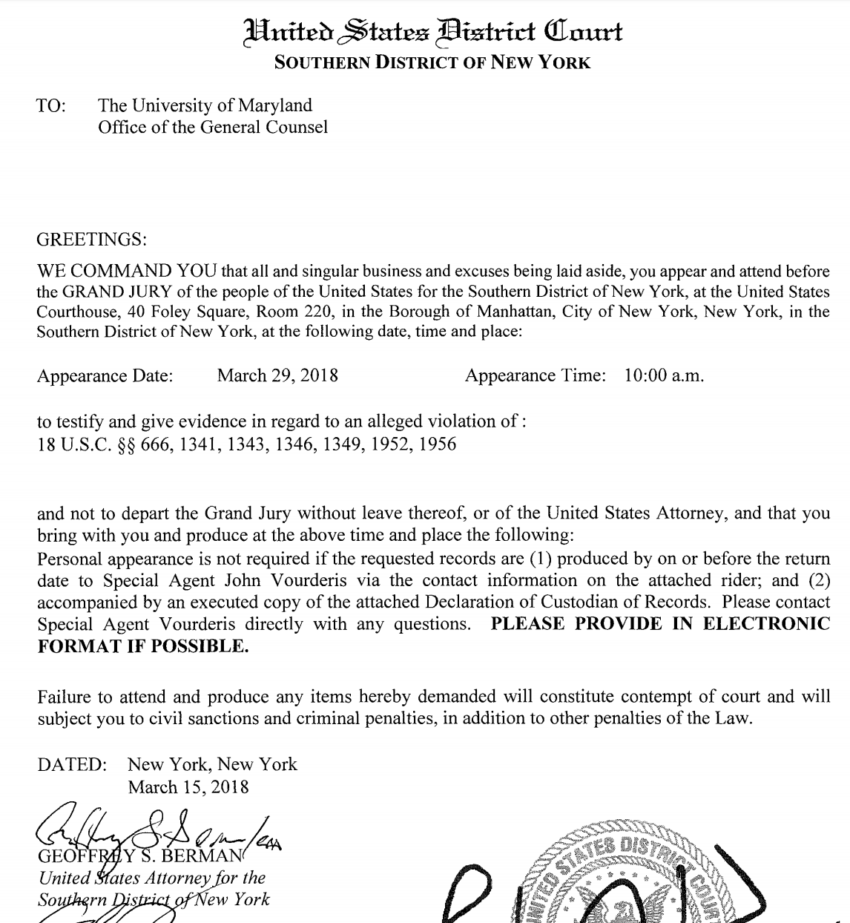