But not to the public – just to the university. Brad Schmidt has the story in the Oregonian:

The NCAA approved a new rule Wednesday that decodes the financial influence of shoe companies in collegiate sports, eliminating a glaring shortcoming in disclosure requirements highlighted this spring by The Oregonian/OregonLive.

That change, coupled with other new rules about recruiting and player eligibility, marks the NCAA’s first actions in the wake of last year’s federal investigation alleging bribery and corruption in college basketball. At least eight people have been indicted, including coaches, sports agents and two representatives of Portland-based Adidas North America.

The NCAA touted its actions as swift and necessary, stating that the changes will improve investigations, increase penalties and provide more flexibility for top college athletes evaluating whether to declare for the NBA.

“Today was obviously a very important day for the NCAA and especially for men’s basketball,” Mark Emmert, president of the NCAA, said Wednesday during a conference call with reporters.

Among the most tangible changes toward transparency, the NCAA effective immediately will require athletics department officials, including coaches, to disclosure annually any athletically related outside income above $600.

That’s nearly identical to a long-standing rule the NCAA eliminated in 2016. The school that pushed for the elimination, the University of Texas at Austin, did so in part to “minimize” records that are subject to open records laws, The Oregonian/OregonLive reported in April. …

When I tried to get Lananna’s report back in 2015, UO GC Kevin Reed’s office claimed he was faculty, and refused to release it:

Eventually Reed caved, as I recall it took the threat of a petition the DA. Diane Dietz had a report about Lananna’s outside income in the RG here. There’s a lot of it. His disclosures, on the other hand, were a bit perfunctory: 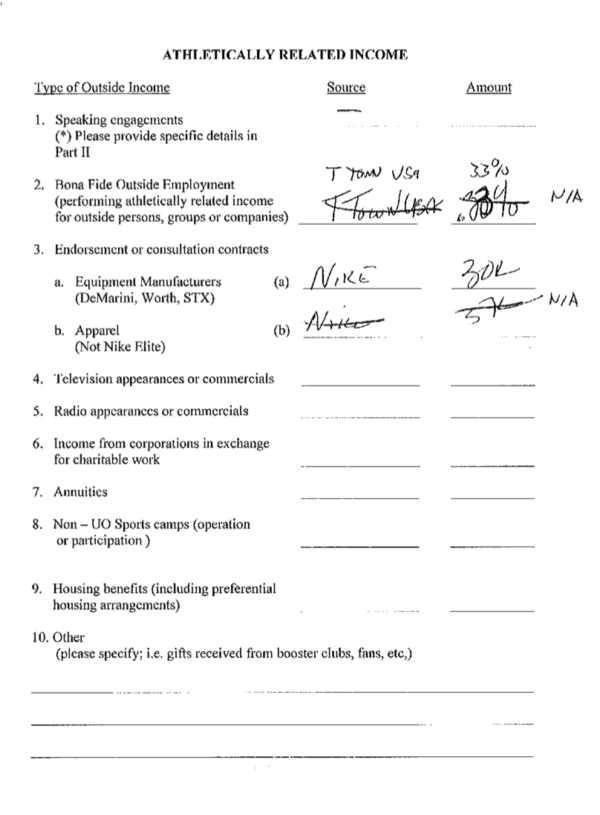