HB 2353 has now passed the Oregon House and Senate unanimously, and Governor Brown is expected to sign it soon: 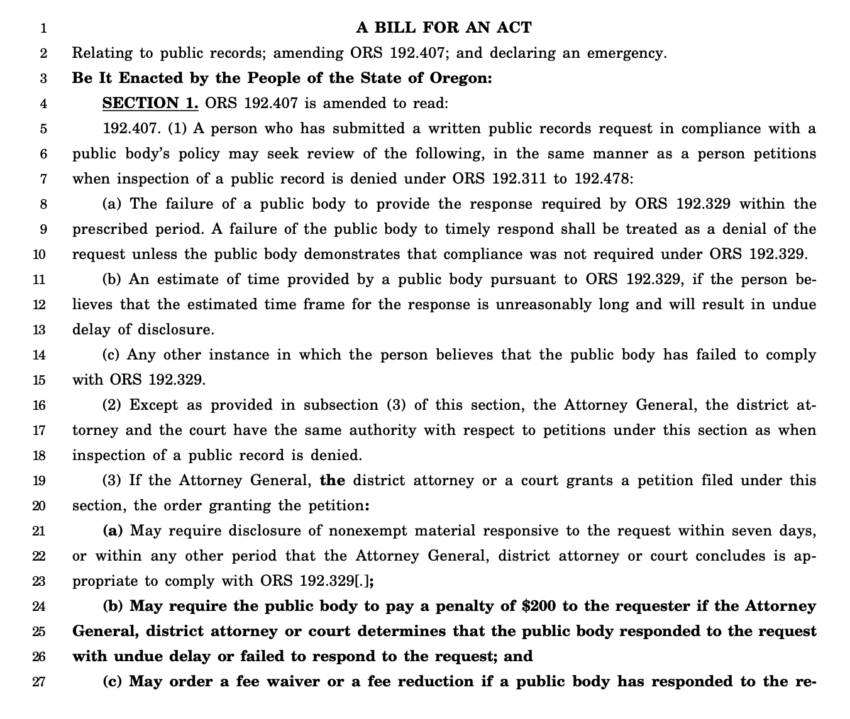 I like how the fine goes to the requester of the records. This emergency legislation is indeed necessary for the sake of the public peace. In the past year the Lane County District Attorney has had to order Kevin Reed’s office twice to comply with Oregon law, and provide records that UO was trying to hide from the public: 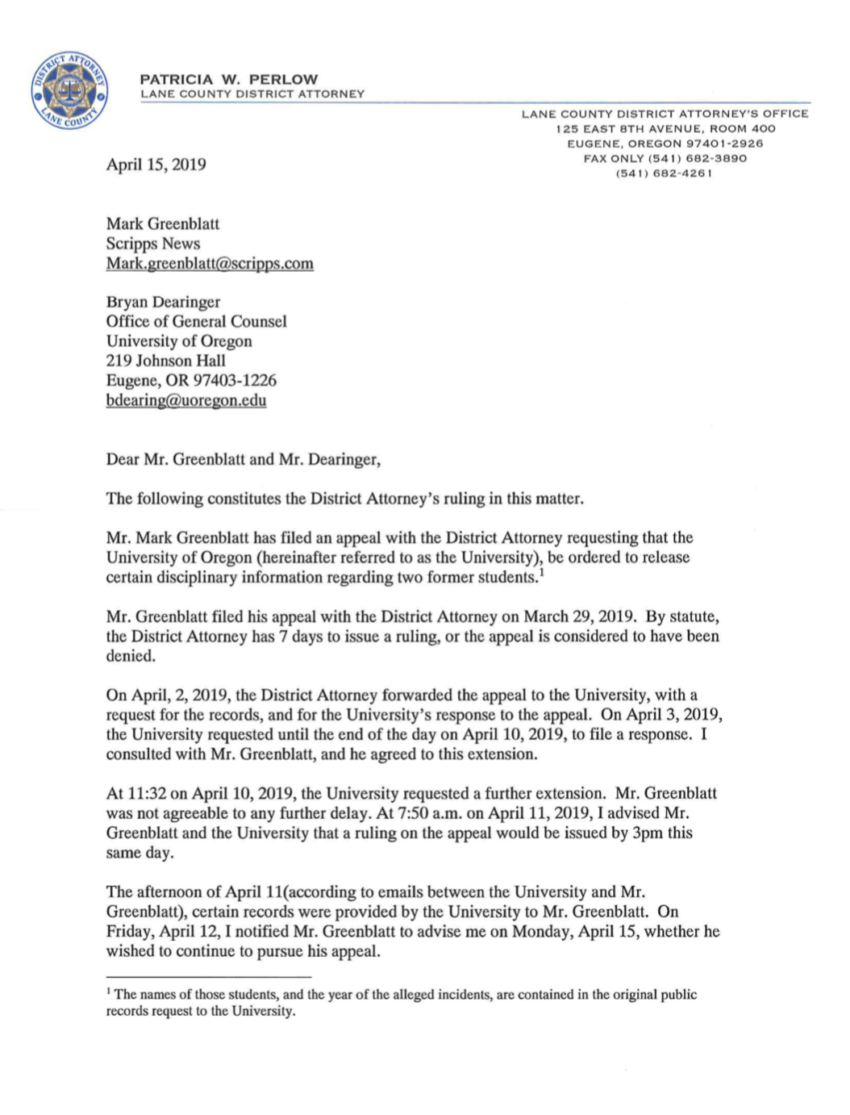 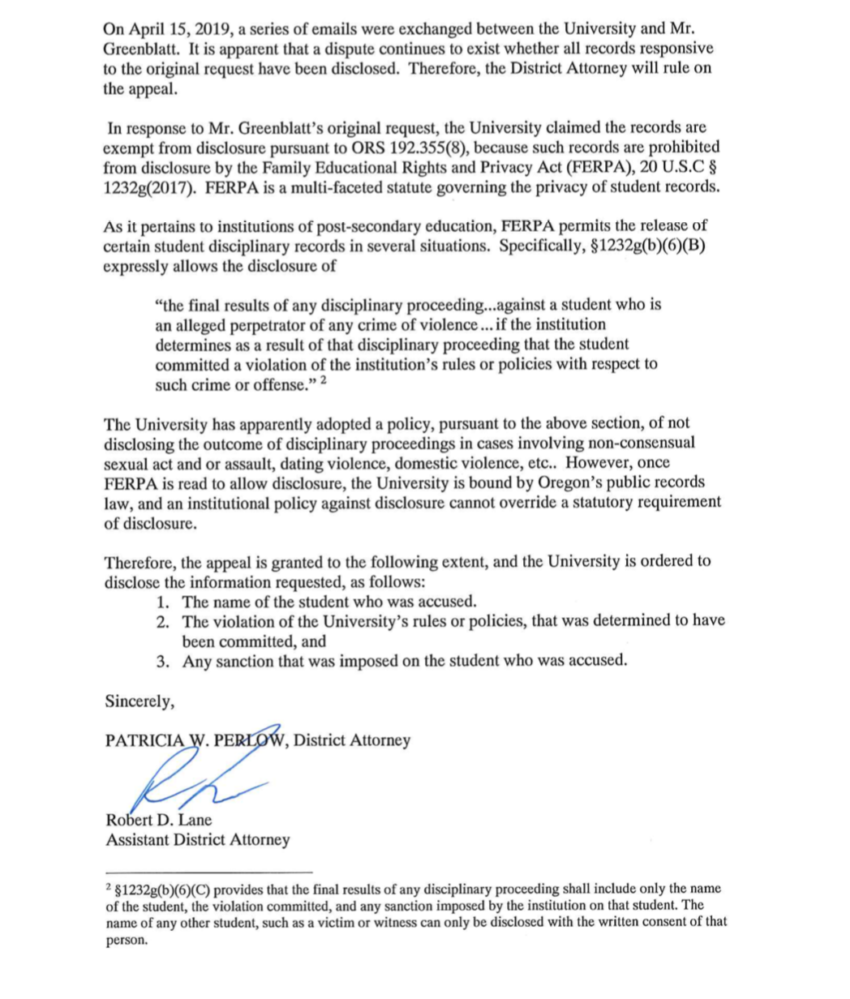 Brad Schmidt has petitioned the District Attorney to review a denial of a public records request made to the University of Oregon (University).

Mr. Schmidt asks that the University be ordered to disclose,

The District Attorney’s review of the petition must be conducted under the umbrella of ORS 192.314(1), that,

Every person has a right to inspect any public record of a public body in this state, except as otherwise expressly provided…

That statute, and the exemptions thereto, reflect a broad public policy that disclosure of public records is the rule, and that any exemptions must be explicitly stated by statute and not simply implied therefrom.  Guard Publishing Co. v. Lane County School District, 310 OR 32(1990).

The University has proffered 3 reasons why the petition should be denied.

The possession of the records is irrelevant. It is instructive to note that ORS 192.311(5)(b) provides that records of the public’s business are considered “public records,” even though they may be located on a personal computer.  Therefore, the threshold question is do the records “contain(s) information relating to the conduct of the public’s business.”  ORS 192.311(5)(a).  Further, the University refers to the conduct as “purchases” and “spending” or “expenditure” of compensation.  However, no money changes hands.  Simply put, the University grants the employee access to an account to obtain Nike product, that otherwise belongs to the University.  Although the University does not control the website, the University controls whether the employee is authorized to use the website to obtains portions of Nike product allocated to the University.  This is not private conduct, it is public business.

The University claims a number of “exemptions” protecting the records from disclosure.

First, the University asserts, pursuant to ORS 352.22(12), the records are “personnel records,” and are exempt from disclosure.  ORS 352.226(13) sets forth the definition of “personnel records.” The University does not specifically assert that the individuals named in the original public records request are “academic staff member(s).”  However, even if one or more of these individuals are covered by the statute, the records requested to not meet the definition of “personal records” as defined in the Faculty Records Policy.

Second, the University asserts that the petition should be denied pursuant to ORS 192.355(2)(a).  That section exempts from disclosure,

The District Attorney, in general, agrees with the assertion of the University that how a public employee spends their compensation, is a matter of personal privacy.  For instance, once an employee’s monthly pay is deposited in his/her bank account, it is not “public business” how that employee spend the money. However, as stated above, in this instance, the public employee is using a system to which they only have access by virtue of their public employment.  If that system is used to conduct public business, as opposed to private business, such use no longer qualifies as “information of a personal nature.”

In the blanket denial of the request, the University has failed to meet the burden of setting forth an individualized showing that specific instances of disclosure would be an unreasonable invasion of privacy.  (See Mail Tribune Inc. v. Michael S. Winter, 236 Or App 91 (2010), requiring a sheriff to make an individualized showing that disclosure of a particular concealed weapons permit would be an unreasonable invasion of privacy).

In Mail Tribune,   the court was faced with a similar circumstance.  Rather than try to parse out what hypothetical circumstances might render a record exempt from disclosure, the court instead noted that the burden of proof is on the public body, in a specific instance, to show that disclosure would be an unreasonable invasion of privacy.  The court went on to hold that the sheriff had not made a showing in any specific instance, and therefore ordered the disclosure of the entire request.  Further, since no showing had been made by the sheriff, the burden of proof did not shift to the party seeking disclosure to show that the public interest nevertheless demands disclosure.

Therefore, it is the order of the District Attorney that the petition is granted.  The University is ordered to disclose the records. The University has seven days to comply with this order, unless it issues a notice of declaratory or injunctive relief.

[1] The University advises that the employee can also use their allowance at the “Nike Store.”  These records are not part of the original public records request.