The LA Times has the story here. It took place while current UO General Counsel Kevin Reed was chief lawyer at UCLA, and it was a precursor to the “Varsity Blues” investigation that’s just led to jail time for some actress. Reporter Nathan Fenno:

Five years before William “Rick” Singer became known as the mastermind of the nationwide college admissions scandal, an internal investigation at UCLA uncovered key elements of his scam.

The first indication of trouble came in a phone call to the school on May 13, 2014. The mother of a high school student wanted to appeal the university’s decision to reject her daughter’s admission as a water polo recruit. The daughter had never played the sport.

“During this conversation,” a report on the investigation said, “the mother stated she was ‘still willing to pay.’ When asked to what she was referring, [the mother] explained that she understood from [Singer] that she was expected to donate $100K to the program, for the admission of her daughter through athletics.”

UCLA’s Vice Chancellor for Legal Affairs Kevin Reed commissioned this investigation. He left UCLA the next year, hired by President Schill as hi VP and UO General Counsel. As Reed noted in his June 2015 job application to UO:

Unfortunately it seems that at least one “potentially mission-interrupting matter” was not really “handled with success at UCLA”, and is now receiving “unwanted attention”. The report Reed commissioned was not made public until the LA Times got a heavily redacted version earlier this year with a public records request. As the LA Times story goes on to note:

UCLA spokesman Tod Tamberg said the school responded to the report with a range of reforms, including a ban on donations from families of athletic recruits until they enrolled. A handful of coaches also were disciplined.

But Reed didn’t notify the Feds, and UCLA allowed Singer to continue his schemes:

Less than a month after Cormier’s report was issued in July 2014, Singer’s company, The Key, held a four-day workshop at UCLA to help students become social media influencers. An advertisement for the event proclaimed: “It isn’t just what you know; it’s who you know and knows you that will make things happen.”

No kidding. Apparently it wasn’t until this year that UCLA turned the report over to the federal investigators preparing the Varsity Blues indictments:

Earlier this year, a UCLA spokesman said, the school turned over a copy of the 43-page report to federal prosecutors as part of its cooperation with the criminal investigation into Singer.

Michael Buckner, an attorney who specializes in sports and education law, said the university did the right thing in launching an investigation but should have referred the findings to federal authorities years earlier and conducted an expanded audit of athletic admissions at the time.

Bradley Simon, a former federal prosecutor, said, “UCLA should have immediately notified law enforcement authorities. Had they done so at the time, UCLA would not be enmeshed in the current scandal.”

A few months ago I made a records request to UCLA for Reed’s communications on this. They are claiming attorney-client privilege for all of them: 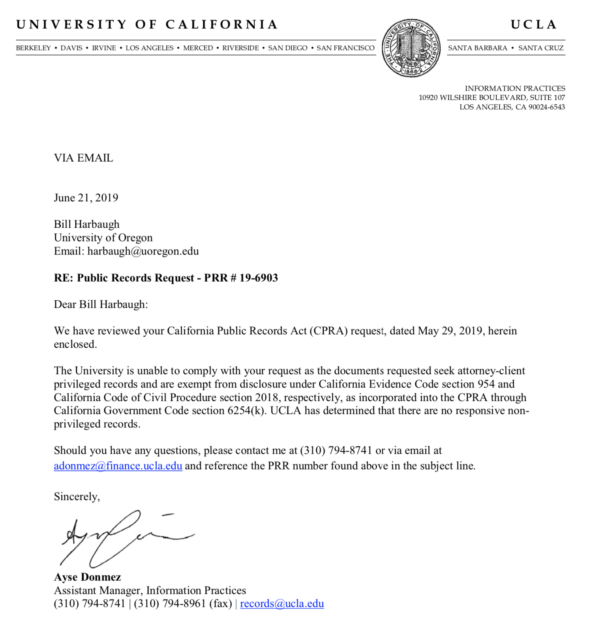 One Response to Why didn’t Kevin Reed tell the feds about UCLA’s admissions scandal?