The U.S. Department of Homeland Security rescinded a July 6 policy directive that would have required international students to take at least some in-person college coursework in order to remain in the U.S.

The government agreed to rescind the guidance to resolve a lawsuit filed by Harvard University and the Massachusetts Institute of Technology. The rescinding of the directive, and an associated FAQ released on July 7, means the government reverts back to a March guidance that allowed international students to remain in the U.S. while taking a fully online course load. …

The docket and complaint are here, courtesy of the Free Law Project. I’m no law professor but much of this seems to be cribbed from the Harvard and MIT complaint filed last week, here. Presumably Ted Olson – a founding member of the Federalist Society – and his firm are giving us a discount: 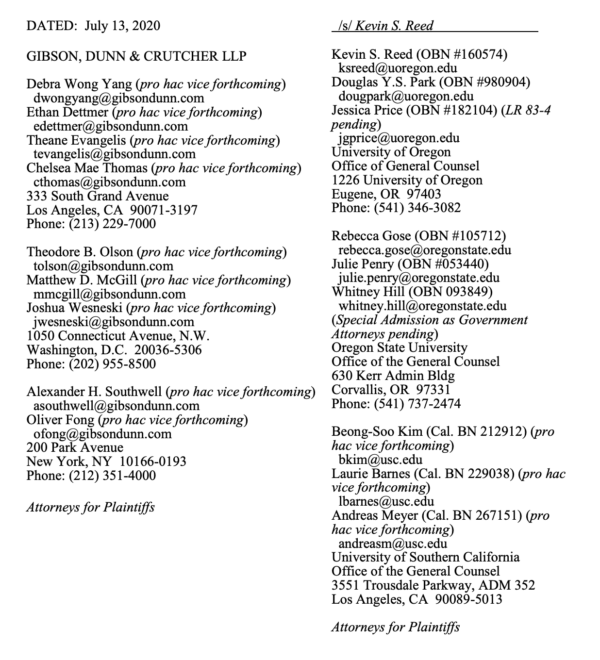 Today, the UO joined with 20 research institutions, liberal arts colleges, and public universities in the West in filing a lawsuit in Eugene’s U.S. District Court that seeks a temporary restraining order against the proposed regulations. The UO is the lead plaintiff, joining Oregon State University, the University of Southern California, Stanford University, and other West Coast universities in seeking a halt to this cruel, unfair, and misguided proposal.
This federal regulation targets one population for sudden exclusion if a university makes decisions for safety to move instruction online. It has no sound justification in health or educational policy. It will cause devastating disruption to the educational and research experience of the UO’s international students already in the United States, as well as those looking to come to our campus.
International students are a vital and valued part of our educational and research mission. I hope the courts will move quickly to block this arbitrary action and provide more certainty to our students who face disruption, financial harm, and stress.
Sincerely,
Michael H. Schill
President and Professor of Law

Around the O press release:

The University of Oregon is the lead plaintiff in a coalition of 20 of the top institutions in the West in a suit asking the federal courts to prevent the government from revoking visas of international students whose studies will be entirely online in the fall.

The suit, filed in U.S. District Court in Eugene on Monday, July 13, seeks a temporary restraining order against the proposed rule issued on July 6 by U.S. Immigration and Customs Enforcement, or ICE, part of the Department of Homeland Security. The nationwide rule would subject students studying in the U.S. on educational visas to deportation should their studies pivot to remote-based instruction as a public health protection measure during the COVID-19 pandemic.

The suit challenges the federal agency’s action as arbitrary and capricious, alleging it was issued without even the most minimal attempt to address its consequences to hundreds of thousands of students and the thousands of colleges and universities that educate them.

The coalition joins Harvard University, the Massachusetts Institute of Technology, the University of California system and Johns Hopkins University, which have also filed litigation to block the action. The coalition in University of Oregon v. Department of Homeland Security is represented by Gibson Dunn, and Crutcher, the legal team that successfully defended the Deferred Action for Childhood Arrivals program before the United States Supreme Court in a decision issued last month.

“This new guidance is cruel, unfair and misguided,” Schill said. “It targets one population for sudden exclusion if a university makes decisions for safety to move instruction online. It has no sound justification in health or educational policy. Unless blocked by the courts, it will cause devastating disruption to the educational and research experience of University of Oregon international students already in the United States, as well as those looking to come to the UO.”

The Trump administration announced the new guidance earlier this month in a reversal of previous temporary guidance that has allowed international students’ education to not be disrupted by online education during the pandemic. The new rules would force international students to return to their home countries within 15 days if they are enrolled solely in classes taught online.

“The government’s reckless and arbitrary action not only harms these students, but also robs institutions of higher education of the autonomy and flexibility to adapt models of instruction to meet the urgent needs posed by a global pandemic,” members of the coalition said in a written statement.

In the suit, UO Dean and Vice Provost for Global Engagement Dennis Galvan provided a declaration outlining how the “significant, immediate, and irreparable negative impacts on University of Oregon students and the University of Oregon as an institution” would suffer if the government adopts the ICE rules.

Galvan said he has already heard from many international students experiencing extraordinary stress. That comes on top of the shared pressure of the pandemic and global efforts to grapple, again, with racial justice.

The Graduate Teaching Fellows Federation spoke out against the guidance and urged the UO to support international students. In a statement, GTFF local 3544 said it welcomes the role the UO is taking.

“This change to SEVP is fueled by xenophobia and anti-immigrant sentiment with complete disregard for the sacrifices many international students make to study in the U.S.,” the statement said. “International students make irreplaceable contributions to UO’s academic community through their participation in classroom discussions, their original and groundbreaking research and publications, and their work in the classroom as instructors. Our community is enriched by their presence every day.”

Since the federal government announced the intent to create new ICE rules, the UO has been working with the Oregon congressional delegation and national associations of higher education to reverse the ICE guidance. To date, five of Oregon’s seven members of Congress have signed letters to Homeland Security asking that the guidance be reversed.

The UO also has joined with other institutions of higher education in asking congressional leaders to codify the flexibility granted in March if government does not withdraw its guidance.