11/16/2009: This is a long post, but it’s got everything from firings to fraud to the feds. UO’s Office of Affirmative Action and Equal Opportunity (AAEO) is in trouble. AAEO has a few straightforward responsibilities. Their web page says:

As a federal contractor, the University of Oregon is committed to affirmative action in employment as a means of ensuring equality of opportunity. The Office of Affirmative Action and Equal Opportunity is responsible for working with all members of the University of Oregon community to ensure that the university is meeting the letter and spirit of its legal obligations related to affirmative action, equal opportunity and nondiscrimination, and to support the university’s commitment to diversity.

In practice this means they prepare annual updates to UO’s Affirmative Action plan, advise hiring committees about how to follow the law, and prepare letters justifying exceptions to the normal AA hiring rules. Those rules are pretty simple in their intent: an open search with a widely disseminated job announcement and a competitive selection process that is neutral with respect to race, ethnicity, and gender. They are spelled out in Affirmative Action Plans, which also contain data on gender and minority status of UO employees, and are supposed to be updated annually:

“The plan is supposed to be updated annually; it is a 12-month plan,” said Harold Busch, the former OFCCP Director of Program Operations. “That means (the contractor) needs to have a new plan in effect at that date. You can choose the date … but you must be consistent.”

10 weeks after we asked her why UO’s Affirmative Action plan was 9 months late, we got the following reply from AAEO Director Penny Daugherty:


I am responding to your inquiry regarding the University of Oregon Affirmative Action Plan. I appreciate your interest in the University’s affirmative action plan and efforts.


In light of the date by which workforce data is available and has been confirmed, we typically are not able to have a new affirmative action plan generated before fall each year. As a result, the plan more accurately is an academic year plan. I am changing the designated dates for the plans to reflect that fact, beginning with the 2009-2010 plan. I am working on finalizing the 2009-2010 plan and expect to have it finalized by the end of the month.


With the 2009-2010 plan has been finalized, it will be posted on the Office of Affirmative Action & Equal Opportunity webpage.

So far as we can tell, in the past 6 years AAEO has been able to complete the AA Plan updates within the federally required 12 months only one time. This has nothing to do with delays in getting data – the current plan was prepared 11 months after the data was available. In 2005 Penny just bagged it, and failed to make any update at all. In the past Frohnmayer would simply backdate the plans to make it look like UO was in compliance – most recently with the 2008 plan, which was actually not even prepared until October 2008. But Dave Frohnmayer says it had his complete authorization and commitment on Jan 1: 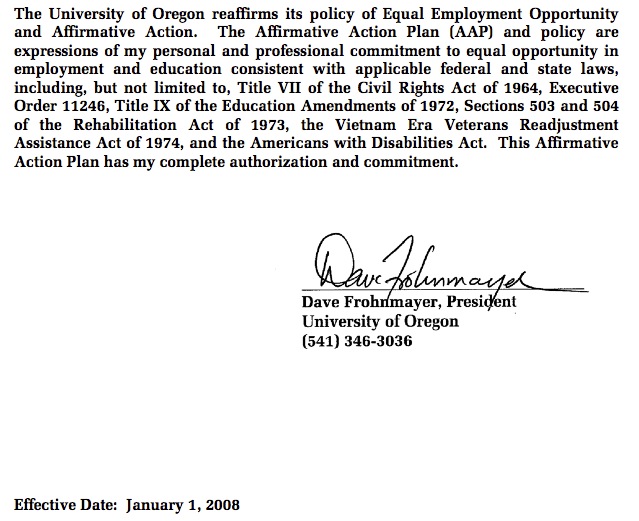 Of course some people – like the federal agent who investigated this – call backdating an official document fraud, and it looks like Lariviere is not going to go along with it. At this point the AAEO office seems to be in total disarray. Tomas Baiza, clearly the most competent person in the office, left in frustration over the summer, and earlier this month Penny apparently fired Susan Plummer for telling unpleasant truths – Susan has even been replaced as a Staff representative to the UO Senate. Penny has had a job opening posted for many months now:


The Office of Affirmative Action & Equal Opportunity (OAAEO) of the University of Oregon seeks a dynamic and committed professional for the position of Affirmative Action/Equal Opportunity (AA/EO) Specialist to complement its current staff. The successful candidate will support and monitor the search and hiring process for officers of instruction, research and administration; assist with the development and communication of the university’s affirmative action plan; provide training related to affirmative action; and serve as a resource and provide sound consultation and advice to all members of the University community with respect to affirmative action and equal opportunity issues.

No takers. The good news – and everyone who has every sat through one knows how good – is that someone has finally told Penny to stop making her officious presentations to hiring committees. The bad news is she won’t tell faculty if they are liable if there is trouble over a hire because her AA Plan is out of date. At least not in writing. Our understanding is that her non-compliance makes it much easier for a complainant to prevail in a dispute.

It’s not like we’re not giving Penny enough money. Most universities have many fewer AAEO staff per employer than UO does. UT – Austin has 4 staff in its AA office. Michigan has 7 staff. Wisconsin has 6. UVA has 8. These universities have 3-4 times as many employees as UO. Oregon State has 4 staff, not Penny’s 7, and they manage to get their AA plans done on time, too. UO has thrown plenty of money at this – Penny’s budget went up by 71% from 2006 to 2009 – in part due to the big raises Linda Brady gave her (and 100K of that is our ICC research money!)

No results. No accountability. Your money at work. So what is in these AA plans anyway? The AA plan details UO’s programs and policies for avoiding discriminatory hiring practices and outcomes, and show how UO’s employment of minorities and women compares to the available hiring pools. For example:

This means that 50.34% of the available pool of tenure-track humanities faculty (defined as all recent US PhD’s in those fields) are women. Since there is no under-representation of women at UO by the 80% rule, the table means that UO’s tenure-track humanities faculty is within 80% of matching the 50.34% of the available pool of tenure-track hires that are women. (The one whole person columns account for the fact that you cannot slice humans into fractions without some side effects.) Yes, you are reading this right. No CAS divisions have minority under-representation, by either of the standard federal definitions. Women do have some under-representation. The AAEO gets the “available percentage” data from the feds every fall. AAEO keeps track of every new hire’s race, ethnicity, and sex, on this form. 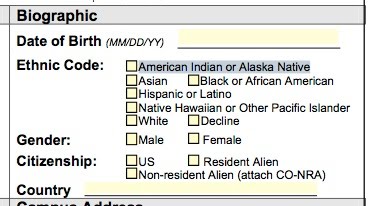 UO’s AAEO office has not complied with advice from the feds that they switch to new forms that allow people to declare that they are more than one race. Director Penny Daughtery will not explain why she hasn’t done this. UO will apparently not dispute an employees self-reported claim of ethnicity, race, or gender. In contrast, most employers – and after Ward Churchill, any university with a General Counsel who knows anything about labor law – will not allow an employee to claim they are “American Indian or Alaska Native” unless they can show that the are an enrolled member of a federally recognized tribe. We have heard about UO professors exploiting this loophole to get the $90,000 Under-represented Minority Recruitment Plan funds. OK, the Irish are a tribe, but are they really Native Americans? – but that’s another story.