9/15/2010: Despite the steady national, state, and local declines in property crime and violent crime (reported in recent front page stories in the RG and the Oregonian), and the continued decline in state support for UO, it turns out that Frances Dyke has authorized some pretty serious and expensive efforts to convert UO Department of Public Safety to a UO Police Department.

DPS Director Doug Tripp points us to his helpful website at http://safetyweb.uoregon.edu/campus-policing, on this topic, which includes this memo from VP for Finance Frances Dyke: 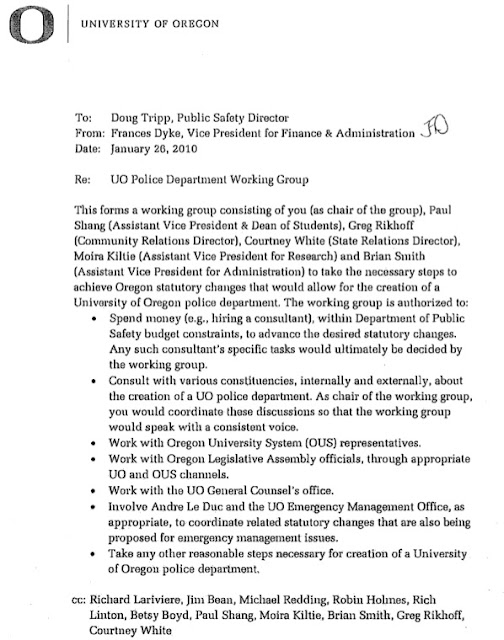 Whenever the academic side asks for more resources for teaching and research, UO administrators have a stock answer to close down the discussion: “Where do you want us to get the money?” In six years the DPS budget has increased 110%, and a Police Department is going to cost far, far more. For example, the draft legislation includes the creation of a police academy for university officers:

So, has anyone asked Frances where the money is going to come from for all this? What was her answer? Why is she in charge of decisions about university priorities?