4/7/2011: It took a petition to Attorney General John Kroger to force the UO administration and Public Records Officer Liz Denecke to finally cough up these documents. No wonder.

Our administration has blown about $1.5 million since last June – $130,000 a month – on a contract to administer UO’s federal grants, after ORSA exploded last spring and no one in charge noticed until the feds started writing some really irate letters. This is for a job that could have been done internally for a few hundred K – and once was.

If you are UO faculty, try getting $50,000 out of UO to support a legitimate research project. The administration will shit all over you.

But if you are a senior UO administrator who needs to spend $1.5 million of the ICC research money that comes from professors’ NSF and NIH grants to cover your ass, they won’t even bother putting the contract out for bid. Just don’t make the rest of Johnson Hall look bad, OK?

I love the way these invoices are stamped “strictly confidential”. Good luck with that. Frances Dyke’s contracts are here. Th Huron Consulting Group invoices are here. Everything since 1/1/2010. 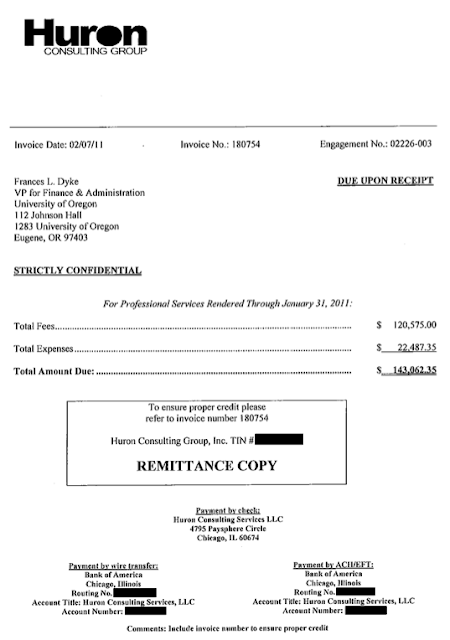 This sample is for one month of work. An anonymous commenter got these docs before UO’s public records officer Liz Denecke sent them to me, and did the math for us:

The Huron contracts and invoices actually cost $130,000 per month of ICC funds. This includes flying 3 of the contractors round trip to Chicago each week, 1 to Utah, and the 5th is from Portland – so no telling what they pay for this. The per hour rate for the 5 contractors range from $250 for Tim Patterson, $200 for Marisa Zuskar, on down to the lowest per hour cost of $75.

Frances Dyke and Rich Linton initially contracted with Huron to 1) determine what is a policy and 2) who determines policy. Once Paula Robert’s left in April 2010, Frances and/or Rich switched them over to ORSA–not what they were initially contracted to do. All that seems to have been accomplished to this point is dissension for $1,560,000 per year.

PS: A few people have asked if they can contribute to help pay for the cost of getting these documents. Actually, Liz Denecke’s stonewalling has embarrassed the senior administration enough that they are now making her consider my request for fee-waiver. Meanwhile, I’ll just say that I paid this $48 out of my single malt account, which is quite depleted now that you mention it. Also low on grappa.