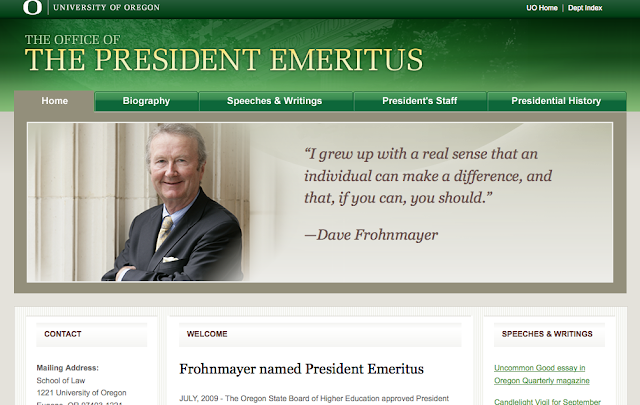 Now it looks like the UO Senate is going to take that title away from him:

It’s a tough world: last summer Russ Tomlin cut Frohnmayer’s pay to $201,208 FTE – making him UO’s highest paid professor. Then Russ wrote Dave 2 special retroactive summer contracts, worth $35,000 or so. The state auditors are still trying to figure out what work Dave did for that money, since he’s been working at another job at Harrang Long et al since September 2009.

Many people have other objections to this new emeritus policy, which is explained in detail here. My understanding is that it has not yet been approved. But I’m willing to bet that the first thing that gets changed is a special exemption for Frohnmayer – or maybe they’ll just claim he’s grandfathered in.

This policy takes away a lot of the discretion about awarding emeritus status. I think that’s good – why should this be a perk that UO can use as a threat to stifle professors, as they did with Jean Stockard?

The requirement for 5 years as full has its pluses and minuses. On balance I think it’s reasonable unless the department votes for an exception.

I also question this part, which gives retired faculty in the TRP program voting rights. Personally, I don’t think short-timers should have a vote in hiring or running their department. Advice, sure. But then let the young turks decide to take it or not:

2. Faculty members who are retired or who hold also emeritus status, including those participating in the UO tenure reduction program, shall retain departmental voting rights during the academic terms they are on the University payroll and are serving on active duty in an instructional or research capacity in that department. A department may choose to extend voting rights to emeriti during those terms when emeriti are not on the University payroll.