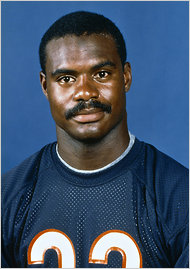 BOSTON — The suicide of the former Chicago Bears star Dave Duerson became more alarming Monday morning, when Boston University researchers announced that Duerson’s brain had developed the same trauma-induced disease recently found in more than 20 deceased players. The diagnosis adds a new and perhaps pivotal chapter to football’s still-unfolding narrative surrounding concussions. Duerson shot himself Feb. 17 in the chest rather than the head so that his brain could be examined by Boston University’s Center for the Study of Traumatic Encephalopathy, which announced its diagnosis Monday morning in Boston. …
5/2/2011: From the NYT.