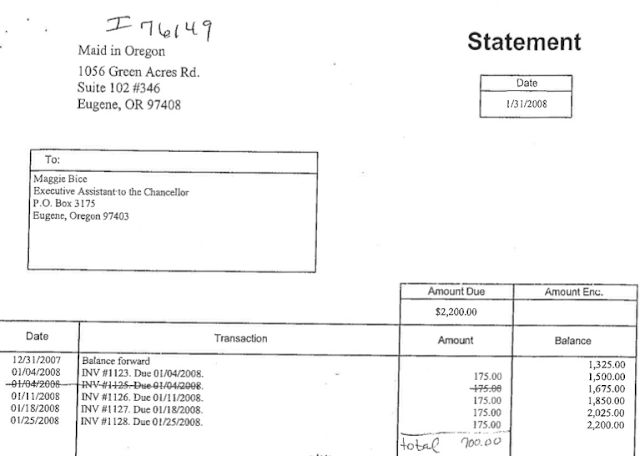 More docs on Pernsteiner here. And more on order from OUS. We also pay his mortgage. And thanks to an anonymous commenter for explaining what’s really going on here:

The fact is that the UO would like to raise staff salaries and eliminate furloughs and has the money to do it. The conflict is with the OUS and the need to subsidize other campuses. Classified staff should be strong supporters of the New Partnership Plan. The status quo is bad for the UO, bad for faculty and staff, and bad for the state.

The RG article itself shows how shameless the OUS is in attempting to undermine the UO. It is really disgusting. It is almost as though they are laying a trap for the UO administration to step into so that they can fire them.

A commenter notes that we also pay for maid service for Lariviere. The difference is Lariviere uses McMorran House for UO events pretty much all the time. Here’s what the Feb RG story says about Pernsteiner:

Not used for meetings

The deed isn’t the only document that restricts how the house is used. Pernsteiner’s employment contract also stipulates he is “required to reside” at Treetops.

The contract also requires that the house be used “to conduct Board or OUS meetings and events on a regular and continuing basis,” something that doesn’t appear to be happening.

Paul Kelly, president of the state Board of Higher Education, said no board meetings have been held at the house in the 3½ years he has been on the board. In fact, he said he’s never been in Treetops.

“I have not been there for any kind of board or official business,” he said.

The story also explains that while Pernsteiner rarely uses the house in Eugene (he lives in Portland, at his own house, which we are paying his mortgage on) his college age kid(s) do live there, along with some of their friends.