Are Big-Time Sports a Threat to Student Achievement?∗

Abstract: We consider the relationship between collegiate-football success and non-athlete student performance. We find that the team’s success significantly reduces male grades relative to female grades, and only in fall quarters, which coincides with the football season. Using survey data, we find that males are more likely than females to increase alcohol consumption, decrease studying, and increase partying in response to the success of the team. Yet, females also report that their behavior is affected by athletic success, suggesting that their performance is likely impaired but that this effect is masked by the practice of grade curving. 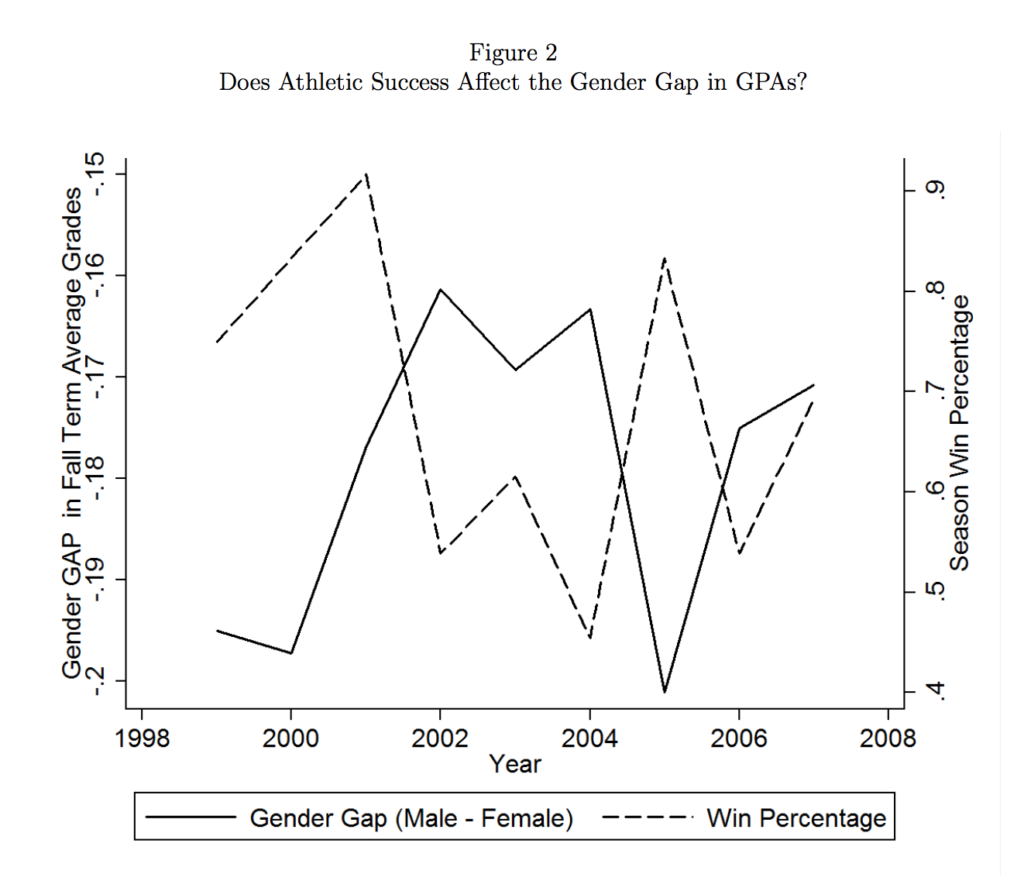 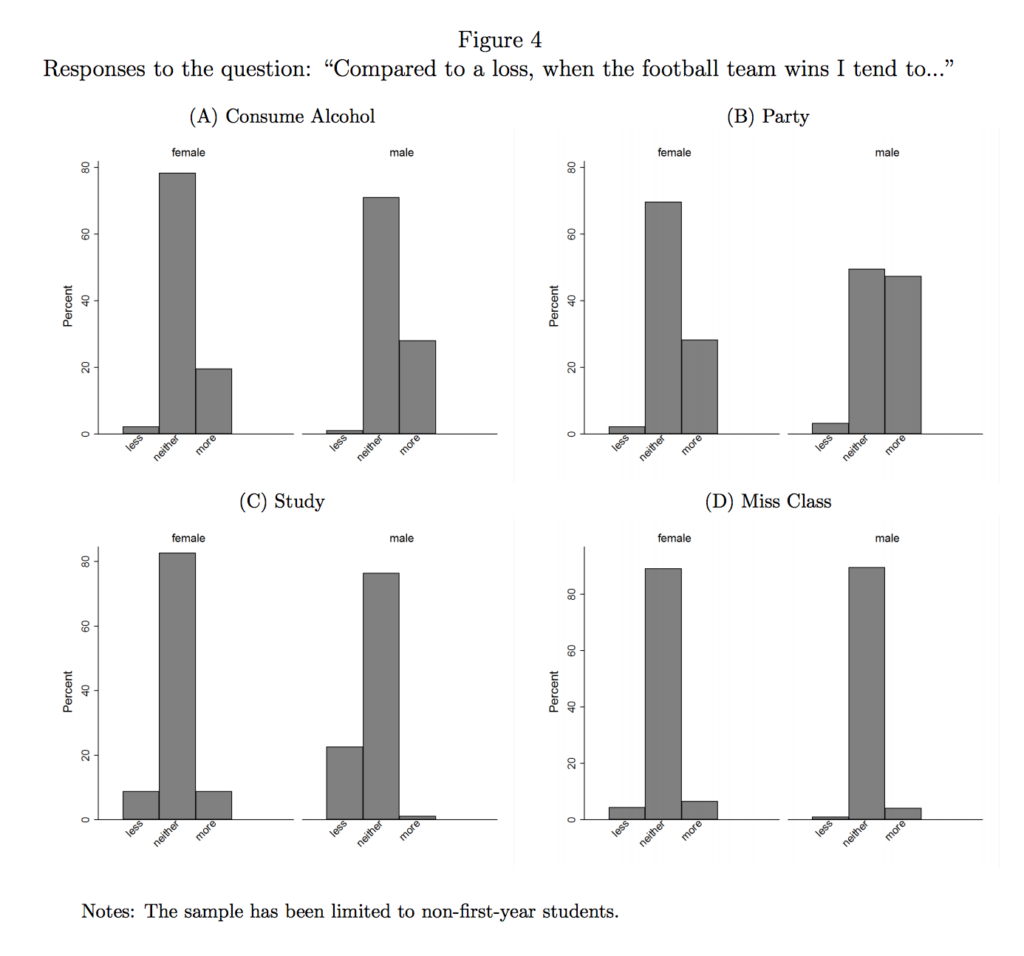 108 news stories last time I looked, and UO is still trying to figure out how to word the press release. (Update: it’s here.) Atlantic magazine summary and discussion here.

The findings didn’t really surprise Oregon student government president Ben Eckstein.
“It’s consistent with the culture on campus and the culture at this university where a stronger emphasis is put on athletic success than on academic success,” Eckstein said. Though a fan himself, he says the university’s financial and building priorities favor sports facilities over academics, and “there’s a lack of focus on connecting our athletic success to our academic mission” which trickles down to students.

“Academic success has been and remains the top priority at the University of Oregon,” she said. “I am proud of the academic strengths of the institution. Our athletic programs enhance experiences for our students, faculty, alumni and the greater community.

The story doesn’t mention that Lorraine’s most recent previous job was as acting Athletic Director, and that she still sits on the committee that gives special admits to the football players that don’t meet UO’s academic standards.

12/21/2011: Getting your research talked about in the NY Times is a good thing for professors. Part of our job is to do research that interests people. Great publicity for UO’s academic side. The NYT matters in a way that a 60 second $500,000 athletic department puff piece never will. Only a few UO research papers get featured each year. Here’s the NYTimes’ take on the latest, from three UO economists:

In examining the grade-point averages of the Oregon student body and the performance of the Ducks’ football team, the researchers found a relationship between declining grades and success on the field.

“Our results support the concern that big-time sports are a threat to American higher education,” the paper’s authors — Jason M. Lindo, Isaac D. Swensen and Glen R. Waddell — wrote. They said their work was among the first to take a look at the “nonmonetary costs” of college sports.

Male students were more likely than females to increase their alcohol consumption and celebrating and decrease studying when a team fared well, resulting in lower grade-point averages, according to the study….

Some 24 percent of male students said that the success of Oregon’s football team definitely or probably decreased the amount of time they spent studying for classes, compared with 9 percent for women. Both men and women reported that they were more likely to consume alcohol, skip class or party in the wake of a win compared with a loss.

Relative to females, “we observe a decrease in male academic time investment and an increase in distracting or risky behaviors in response to increased athletic success,” the researchers wrote.

Anyone who has ever been to a university – or just to a football game – knows this is true. But here’s the response from official Duck spokesperson and Executive Assistant Athletics Director Dave Williford, who presumably has spent a fair amount of time tailgating, if not studying, and who therefore really should get it:

David Williford, a University of Oregon spokesman, said about the study: “I would like to try and understand the factors involved to coming to that conclusion. Statistics can prove anything. But that’s my personal opinion and not necessarily the university’s.”

Followed by “Wait, will you please not print that?” Too bad they couldn’t get our NCAA Faculty Athletics Representative Jim O’Fallon to comment too. I’m guessing AD Rob Mullens hid under his desk as soon as he heard what the reporter wanted to ask him about. Williford – the $85K a year spokesperson and the low guy on the totem pole, got stuck taking the call.

Oregon parents, beware: the Ducks are 11-2 this season, and playing in the Jan. 2 Rose Bowl against the University of Wisconsin, the sixth-best party school in the nation according to Playboy (in 2010, the Badgers ranked third). For transcripts, this game might be an F-ing disaster. “Our results support the concern that big-time sports are a threat to American higher education,” the researchers  — Jason M. Lindo, Isaac D. Swensen and Glen R. Waddell wrote.

The Oregon Commentator – back on the job now that the game parties are over – chimes in too. But there’s more. Two other recent papers have used higher frequency data to tie football *losses* to domestic violence:

Abstract: There is a great deal of anecdotal evidence that college
football games can lead to aggressive and destructive behavior by
fans. However, to date, no empirical study has attempted to document
the magnitude of this phenomenon. We match daily data on offenses from
the National Incident-Based Reporting System to 26 Division I-A
college football programs to estimate the relationship between college
football games and crime. Our results suggest that the host community
registers sharp increases in assaults, vandalism, arrests for
disorderly conduct, and arrests for alcohol-related offenses on game
days. Upsets are associated with the largest increases in the number
of expected offenses.

FAMILY VIOLENCE AND FOOTBALL:
THE EFFECT OF UNEXPECTED EMOTIONAL CUES
ON VIOLENT BEHAVIOR

DAVID CARD AND GORDON B. DAHL

We study the link between family violence and the emotional cues associated
with wins and losses by professional football teams. We hypothesize that the risk
of violence is affected by the “gain-loss” utility of game outcomes around a ratio-
nally expected reference point. Our empirical analysis uses police reports of violent
incidents on Sundays during the professional football season. Controlling for the
pregame point spread and the size of the local viewing audience, we find that upset
losses (defeats when the home team was predicted to win by four or more points)
lead to a 10% increase in the rate of at-home violence by men against their wives
and girlfriends. In contrast, losses when the game was expected to be close have
small and insignificant effects. Upset wins (victories when the home team was
predicted to lose) also have little impact on violence, consistent with asymmetry
in the gain-loss utility function. The rise in violence after an upset loss is concen-
trated in a narrow time window near the end of the game and is larger for more
important games. We find no evidence for reference point updating based on the
halftime score.JELCodes: D030, J120.

Of course on the pecuniary side we’ve got Stinson and Howard (2004)http://business.nmsu.edu/%7Emhyman/M454_Articles/%28Collegiate%29%20Stinson_SMQ_2004.pdf showing another effect of big-time sports programs:

• Our statistical analysis of the updated data suggests no relationship – either positive or negative – between changes in operating expenditures on football or basketball among Division I-A schools and incoming SAT scores or the percentage of applicants accepted.
• The academic literature is divided on whether athletic programs affect academic quality. While our results suggest no statistical relationship one way or the other, our data are limited to ten years and such a relationship may exist over longer periods of time. In addition, the relationship between athletics and academic quality may manifest itself in ways other than the effect on SAT scores or other directly measurable indicators.
•  We continue to conclude that the hypothesis that changes in operating expenditures on big-time sports affect measurable academic quality in the medium term is not proven.

• Econometric analysis using our updated database shows little or no robust relationship between changes in operating expenditures on football or basketball among Division I-A schools and alumni giving (either to the sports program or the university itself).
• The academic literature is again inconclusive on this issue. As with the previous hypothesis, our results suggest little or no statistical relationship – but our data are limited to ten years and such a relationship may exist over longer periods of time.
• We continue to conclude that the hypothesis that increased operating expenditures on sports affect other measurable indicators, including alumni giving, is not proven.

On the other side of the argument, of course, there’s Duck spokesperson Dave Williford, and this $500,000 video:https://www.youtube.com/watch?v=_csyVJEzMFw&feature=player_embedded

Update: Dave Williford writes a nice apology – though it should come from his boss. But Rob Mullens still won’t meet with the IAC, Jim O’Fallon still won’t explain why the IAC can’t have a voice in who will pay for the NCAA settlement, Randy Geller still won’t stop redacting the Glazier invoices, and Jamie Moffitt still won’t come clean about the Kilkenny baseball loan, etc.

I would like to apologize for the insensitivity of my comments to the
New York Times. I wish to assure you that I hold the academic mission of
this University to be of the highest priority and certainly did not
intend to create any perception that resulted in a compromise of the
integrity of that academic mission.