5/23/2012 update. The list of supporters for this PAC is growing, and as a commenter reports it now includes a Lillis. Updates here. I don’t know that Bob Berdahl deserves credit, but it wouldn’t surprise me.

This is part of what it will take to move the independent UO board part of Lariviere’s New Partnership through the legislature. Last year the UO Foundation spent about $500,000 lobbying for it, near as I can tell.

The biggest problems with an independent board will be too much influence from sports boosters, too many of the governor’s political appointees, and too little transparency. But those problems could hardly be worse at UO than they now are, and there’s a lot of upside – so let’s roll the dice!

There’s big money behind this, most of it and not all of it from UO sports boosters: 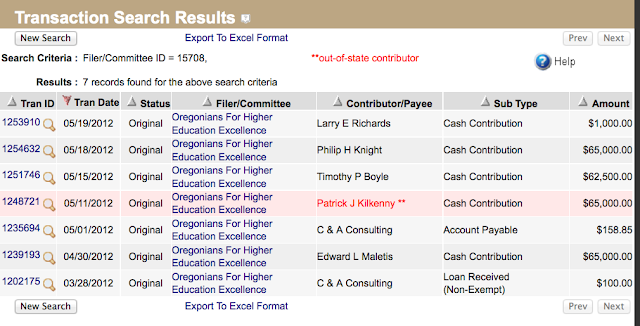 5/22/2012: Click here for updates on the contributions. Thanks to Nigel Jaquiss of Willamette Week for the story, which I saw on Bojack.org. And if you’re thinking of contributing, don’t neglect Sam Dotters-Katz’s SHEEN PAC, which has the same goal but slightly less cash on hand. 5/22/2012.