By uomatters | 08/21/2012 - 1:07 am |08/21/2012 Uncategorized
8/21/2012: Word from the historic EMU FishBowl is that RBI Strategies no longer thinks it’s in their best interests to be associated with UO and the efforts of our VP for Student Affairs to use student money to manipulate students into voting for higher student fees. More when Randy Geller gets around to filling this public records request. Meanwhile, Betsy Hammond has more in the Oregonian:

University of Oregon leaders admit they made a tactical error when they hired a top political firm that advised them to use hard-sell techniques and $30,000 in free T-shirts and other items to persuade students to raise their own fees to upgrade the student union.

UO Vice President Robin Holmes said Monday evening that the university has ended its contract with the firm and won’t follow through with any part of the full-bore effort to control student messaging, criticize opponents and hand out swag in advance of an October student vote.

Diane Dietz reports in the RG:

Yes, “mistakes were made,” as they say, but Robin Holmes is not taking the fall. Ian Campbell had this quote from her in the ODE, blaming it on students and staff:

“The EMU Renovation Task Force Team asked the EMU staff if there was any possibility for there to be some help as they looked at the ways to put out the educational messages and the facts about the project and the best way to address that. The EMU staff contracted with a marketing team, …”

That said, I expect she’ll soon issue a statement saying something like:

“While the details of this regrettable campaign were arranged by others, I must accept responsibility for failing to supervise these students and employees adequately.”

“Of course I mean responsibility in the abstract sense. I’m not going to actually pay the RBI bill out of my raise, or suffer any other consequences from these mistakes. You are.”

The contract is here. Interestingly the signatures for legal review aren’t on this version, or they were redacted by General Counsel Randy Geller’s office, or it was never reviewed. Take your pick: 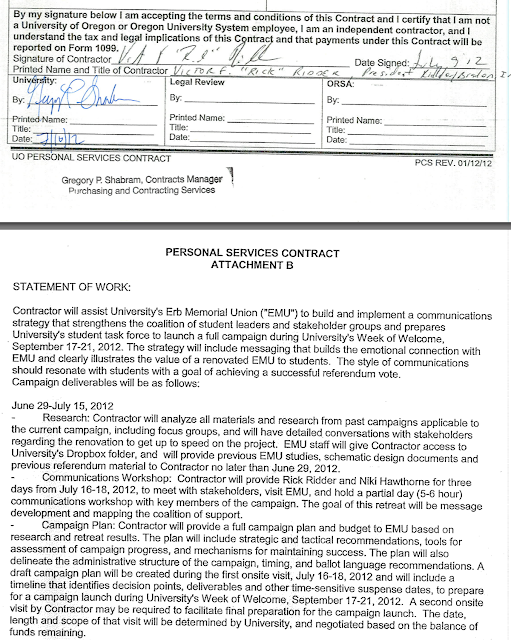