Mac Court was built in 1926. Students paid a $15 annual fee for construction, with the debt retired in 1932. At the moment it appears the PE department runs a few volleyball classes in Mac Court. Plans to convert it to academic use have gone nowhere. So why is the academic side of UO now paying the athletic department $467,538 a year for it?

Because Dave Frohnmayer made this secret deal with Pat Kilkenny in 2009, which Rob Mullens and Jamie Moffitt hid until I threatened to file a public records petition. The scheme has the academic side paying about 1/4 of the annual cost of the 30-year bond used to buy the Matt Court land. We’ve already made 3 payments to the athletic side – almost $1.5 million. On the flip side we gave the athletic department permanent use of the site for their Jaqua Center jock box for $1.

I’ve asked Moffitt if UO plans to re-examine this deal now that Mike Gottfredson is in charge. No answer. 10/8/2012. 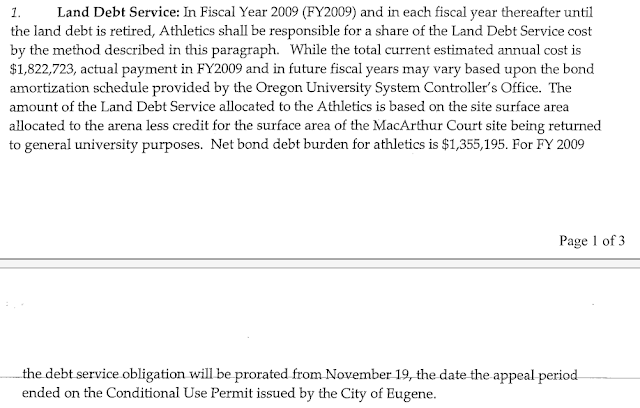