Duck football is below the curve. Mullens’s pay is above.

Last year was the best ever for Duck football. Perfect regular season, second in the BCS. So good that AD Rob Mullens and Interim President Bob Berdahl argued that it was time to expand Autzen, and that if we did the athletic department might finally be able to follow through on its 2004 promise to start contributing towards academic scholarships:

1. The Task Force and the Athletic Department recommend a voluntary financial contribution by athletics to the Presidential Scholarship fund. This voluntary contribution will help symbolize the mutuality of the relationship between athletics and academics.

But the Ducks have not been doing so well when it comes to profits – the most recent data has them falling well below average, controlling for stadium size. In fact there are only a few AD’s doing worse. Oregon got trounced by places like Washington State, Wyoming, and Florida Atlantic – all with much smaller stadia: 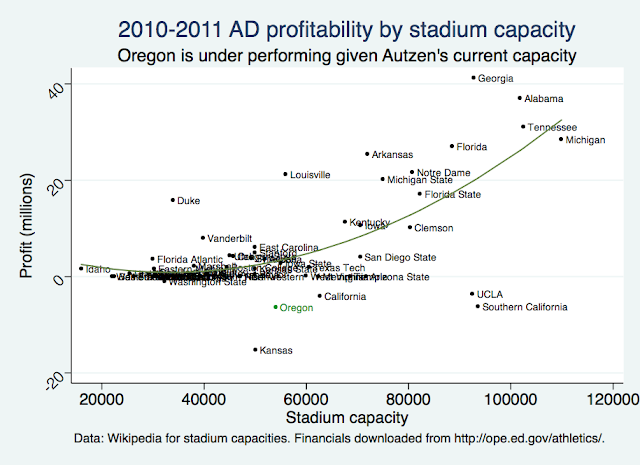 The Duck’s problem is not revenue, it’s spending. So here’s hoping Mullens makes at least some effort to get his expenses under control before he tries to sell an Autzen expansion to President Gottfredson. Of course the Duck’s biggest variable costs are the salary for Mullens and his coaches. And those guys have no problem whatsoever diverting the money that should be going to fund scholarships to fill their own pockets. Rob Mullens is paid $200,000 or so more than his comparators: 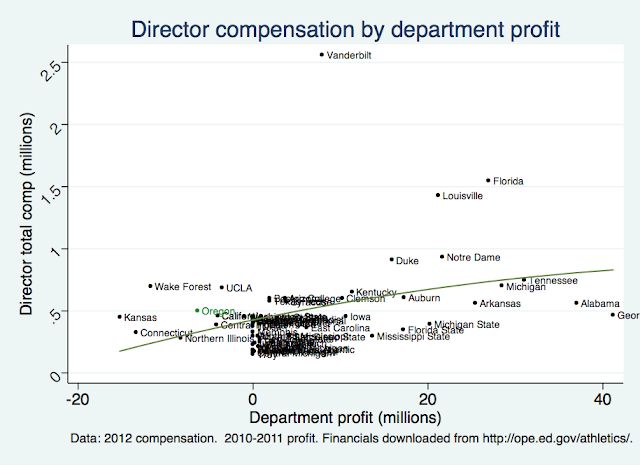 Does Mike Gottfredson have the stones to rein in Rob Mullens and his buddies? UO will find out soon.

Thanks to an anonymous UO Matters contributor for the figures. Your bottle is on its way. Any defamation is the sole responsibility of UO Matters. English libel law does not apply, since this post was written under the influence of scotch.

15 Responses to Duck football is below the curve. Mullens’s pay is above.