4/26/2013: That would be the TTF at Montana State, story here. Their NTTF union stays, and there is a new GTF union as well. The TTF decertification drive was led by grant funded faculty, who put up $10K or so of their own money for lawyers. Those leaders would likely would not be in the union here, by mutual agreement of Rudnick and the union organizers to exclude people who hired staff on grants.

At UO, the histrionics and bungling by the administration’s bargaining team, in contrast to the calm professionalism of Mauer, Cecil, and the faculty side has, in my opinion, strengthened the union considerably. Many TTF faculty were worried the union would be dominated by the NTTF’s. I don’t see that happening – the union’s proposals have been very balanced.

With a few exceptions the union skeptics I talk with are, if not quite ready to join up as card carrying members, appalled at the continued incompetence of the administration’s bargaining team, and Gottfredson’s disavowal of the raise proposals that President Lariviere had tried to implement. And, as admin bargaining team member and spokesperson Barbara Altmann recently said to a reporter:

“The president signs off on everything that the administration does, …”

So on top of everything else they’ve now blown the plausible deniability strategy: have Rudnick bargain tough, then Gottfredson comes in at the last moment as the great compromiser.

The UO Senate is not exactly a random sample of faculty, but they recently voted 30 to 3 to support the union’s position on nomenclature and shared governance. Meanwhile, the anti-union faculty group has not posted anything on their blog since Dec 18:

My own anti-union posts from last year are here and my more neutral but outdated Union FAQ is here. It’s now been 364 days since the union was certified. If the admin team would stop wasting billable hours – over $350,000 since certification – we could easily have a contract by June 15. 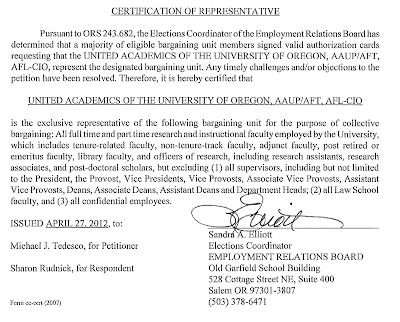