The Ways and Means subcommittee meeting is scheduled for 8:30 AM, Salem, Thursday the 23rd. One last chance to let your legislators know how you feel about this power grab. 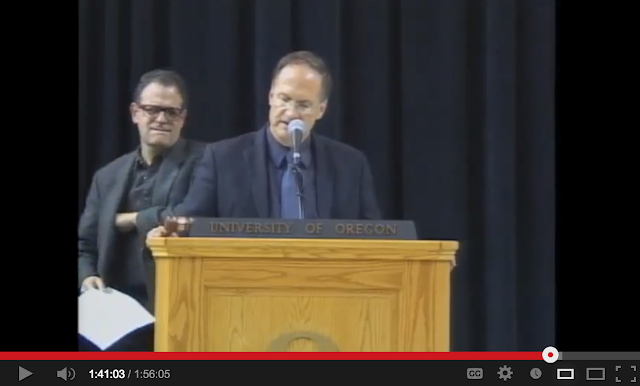 Whoops, the video of President Kyr and Peter Keyes, and the resolution below, are from November 2011, at the meeting of the Statutory Faculty in Mac Court, protesting the Lariviere firing.

I believed I was endorsing legislation for a board that would including voting faculty and that would put the UO constitution on a firm legal footing.

Now the legislation has been written by President Gottfredson, Randy Geller, and their unknown advisers and lobbyists. There’s been little to no faculty input. Unless you count Gottfredson’s “asked and answered” fiasco on Tuesday.

The Oregon legislature will probably vote on this within weeks. Does the faculty support it in its current form, which includes no voting faculty members, and no guarantees for shared governance? Who knows – we’ve never been asked.

SFA 11/12-02: Motion for the Establishment of a UO Board of Trustees, Senate Executive Committee presented by Professor Peter Keyes, Architecture

The UO Faculty Assembly directs the Senate Executive Committee, or an ad hoc Senate Committee to be appointed by the Senate President, to initiate negotiations with State Legislative leaders and the Oregon State Board of Higher Education, leading to the appointment of a University of Oregon Board of Trustees.
The scope of issues to be engaged in the discussion of the powers of this board shall include, but shall not be limited to:
1.    The composition and appointment process of the Board
2.    Operational oversight of the University
3.    Setting of  tuition and fees
4.    Budgetary control
5.    Contract negotiations and contract authority
6.    Bonding authority
7.    Acquisition of property
8.    Status of legal counsel
9.    Construction buildings
10. Authority over the hiring and firing of president of UO.
11. Hiring and personnel policies for faculty and staff