6/8/2013: Sorry, long story. Lane County Clerk Cheryl Betschart, who is in charge of elections and investigating illegal voting, recently sent former OUS Chancellor George Pernsteiner a form asking if he really should be voting in Lane County. He sent back this response:

Yup, that’s our former Chancellor, accusing the Lane County Clerk of making a “specious challenge to my citizenship and residency”.

Specious? Really? Pernsteiner has been living at the Treetops Mansion at 2237 Spring Boulevard since 2004, courtesy of Oregon college student’s tuition money. At 6,389 square feet it’s the second largest house in Lane County. Maintenance is $150K or so a year. Our students also spring for Pernsteiner’s maid service.

Except Pernsteiner doesn’t really live there. He just pretends he does. If he doesn’t, the house goes back to the heirs of Campbell Church, a rather remarkable man who made his fortune in the Alaskan gold rush:

The early days of ecotourism – the M.V. Westward had a harpoon the guests could try out on passing whales.

In 1938 the formidable Irene Gerlingher, a UO booster from back when that term had nothing to do with athletics, persuaded the widowed Mr. Church to give Treetops to UO, on the condition that it be used as the residence of the UO President or the Chancellor: 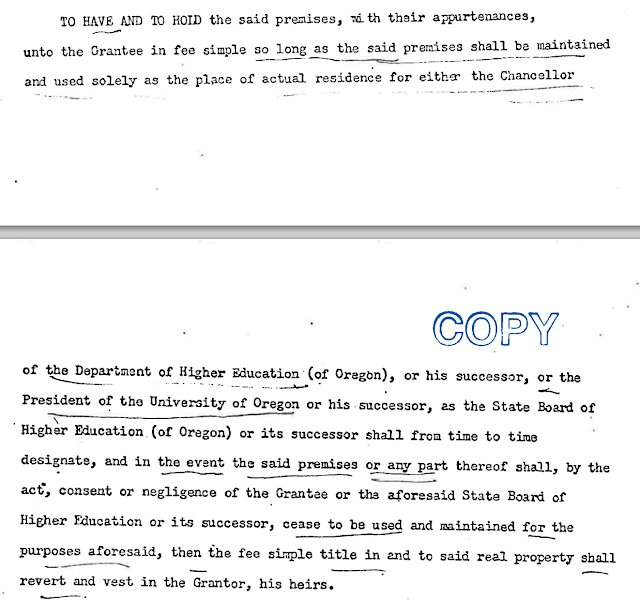 But Pernsteiner’s actually been living at his own house in Portland. In fact his contract was giving him another $23K a year to pay for his mortgage there. Greg Bolt had a great story about it in the RG a few years back. That’s all over now. OUS board president Matt Donegan finally fired the right guy, and OUS has a new interim chancellor, Melody Rose. And as of 7/1/2013 she’s kicking Pernsteiner out of Treetops (and has no intention of getting involved in the scheme to keep it, by pretending to live there herself.)

This is sort of a problem for Mr. Pernsteiner, since back in 2011 when I challenged his claim to be a Lane County resident, he got his lawyer Bill Gary (of Harrang, Gary, Rudnick and Long) to tell Lane County Clerk Cheryl Betschart that:

Pernsteiner most recently voted in Lane County in the May election. Of course it’s illegal to vote in one county when you really live in another. But Ms Betschart said there wasn’t much that she could do except take his word – or his lawyer’s word – about his plan to someday return to live at Treetops. We’ve all got a dream I guess, and it does have a fabulous view from the verandas, a guest house, and a tennis court.

But, somewhere between 2011 and now reality set in. Pernsteiner changed his mind about buying Treetops from the Church heirs, and bought another house for his permanent residence. According to Zillow he did it on 4/27/2012, but what’s a few illegal elections? At 800 square feet it’s a bit smaller than Treetops, but it’s got a little history too, as James Beard’s beach cottage, and when you have to pay for your own maid service you make some sacrifices.

What will become of Treetops? Presumably President Gottfredson will move in, satisfying the gift letter terms, and UO will then let McMorran House, the current presidential residence, be used as the official residence of UO general counsel Randy Geller, the man who really runs UO. Or maybe Athletic Director Rob Mullens? The Duck football coach? Phil Knight?

Tagged OUS Board and Chancellor, Pernsteiner, Treetops. Bookmark the permalink.