Bar investigates Rudnick, Gary and Geller for allegations of lack of candor with the tribunal, in an attempt to pad legal fees

Every day for the past week, you have published information concerning your defamatory statements on your blogspot under a headline saying “Bar Investigates Rudnick, Gellar[sic] and Gary For Alleged Bill Padding.” [Emphasis added.] This headline is itself false and defamatory. The frivolous complaint that you filed with the Oregon State Bar does not allege “bill padding.” Because this headline is republished on Google and other search engines the republications of your original defamatory claim that we committed perjury and your subsequent deliberate misstatement of the nature of your complaint threatens to cause us and the law firm with which we are associated to suffer irreparable harm to our professional reputations.

Pursuant to ORS 31.120 we hereby demand that you publish a retraction of your false and defamatory statements concerning us as provided in ORS 31.215.

(Full letter below). The ethics complaint to the bar which they refer to stated, in paragraph 2:

In brief, I believe that Mr. Gary, Ms Rudnick, and Mr. Geller may have violated the ethics requirement for “candor with the tribunal”, in an attempt to pad the legal fees HLGR was trying to get from the state of Oregon as the result of a public records case, and that Mr. Geller may have violated rules regarding conflicts of interest stemming from his support for this effort, and may have used his public office to try and delay or prevent release of public records related to it.

Ms Rudnick and Mr. Gary argued that my headline summarization of “alleged bill padding” was not factually accurate, given that my complaint does not accuse them of bill padding per se, but rather of a lack of “candor with the tribunal”, in an attempt to pad their legal fees.

My headline was not factually supported, I retract it, and I regret publishing it.

The good news: UO’s attorney’s at HLGR finally admit that UO Matters is news media. This will certainly help me argue for public interest fee-waivers. I’m no law professor, but it also seems that they agree I’m protected under ORS 31.150, Oregon’s law regarding “Strategic Lawsuits against Public Participation”, which Randy Geller has argued in the past is not true. The law firm of Davis, Wright and Tremaine has information on this law here.

The bad news: They’ve sent me a “take-down” notice demanding a retraction of this post, particularly the headline. Under Oregon defamation law (ORS 31.120) plaintiffs can’t recover damages against news media unless they first request a retraction. ORS 31.125 explains the rules:

The correction or retraction shall consist of a statement by the publisher substantially to the effect that the defamatory statements previously made are not factually supported and that the publisher regrets the original publication thereof.

I’ll have a response to Ms Rudnick and Mr. Gary’s letter after due consideration. Meanwhile, comments are welcome. Full text here:

6/12/2013 update. I’m not the only person who’s unhappy with what Rudnick and Gary charged the taxpayers. Oregon AG Ellen Rosenblum appealed the $550,000 in HLGR billings to the Oregon Court of Appeals back in July 2012 – apparently one of her first official acts – and it’s still in court. More docs soon: 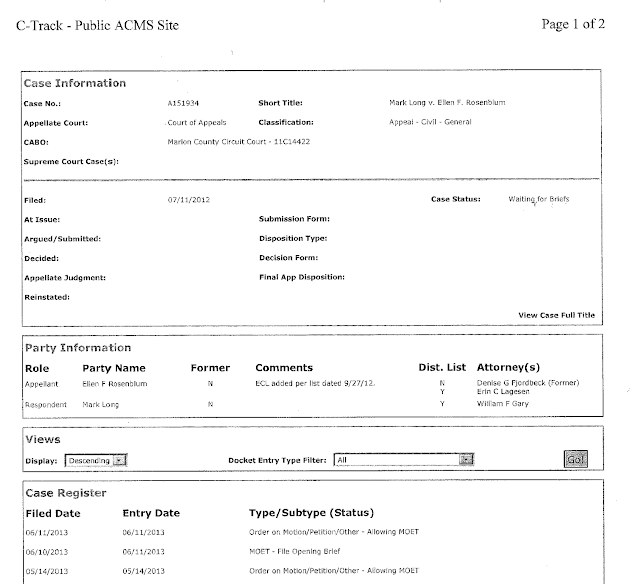 6/10/2013. Nigel Jaquiss has a detailed story in Willamette Week, here, with brief responses from Geller and Gary.

It’s only tangentially related to the bills Rudnick and HLGR have submitted to UO for legal work involving the faculty union, here, which are probably close to $500K by now.

My ethics complaint to the bar is here, the affidavits from Rudnick, Geller, and Bill Gary are here (big file) and the letter from the bar’s Assistant General Counsel Chris Mullman giving them until 6/20/2013 to respond to the initial intake query is here.

Fact check update: My bar complaint states that the Frohnmayer/Gary bar ethics complaint against DOJ attorney Sean Riddell led to sanctions against him. Actually, the bar dismissed their complaint in Sept. 2012, finding he had made no violations of the bar’s rules of professional conduct. My apologies to Mr. Riddell for the error.

74 Responses to Bar investigates Rudnick, Gary and Geller for allegations of lack of candor with the tribunal, in an attempt to pad legal fees