7/3/2013: That was quick. From the law offices of BENNETT HARTMAN MORRIS & KAPLAN, full pdf here.

Replace “cost” with “save” if you are looking at this from the state’s point of view, and note that these costs or savings are not discounted back to present values. 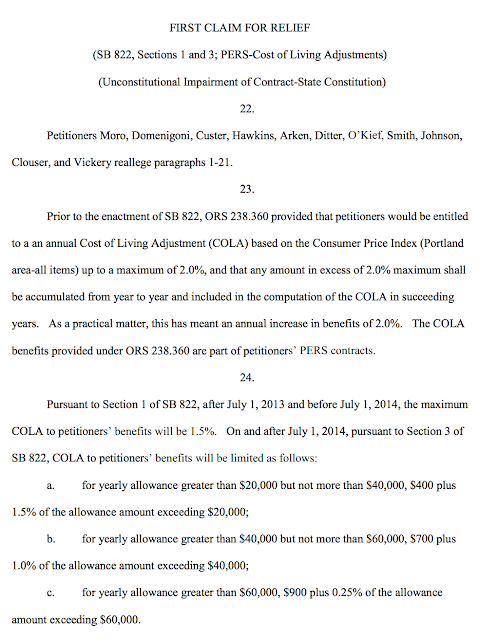 It just may die there. If these bills fail, there will be no cut to inactive benefits, no additional cuts to the retiree COLA, no phase out of senior medical deduction, and a host of other noxious tax increases.

Democracy is messy. I personally know 5 UO faculty who retired early, losing substantial amounts of income, causing a moderate amount of disruption to teaching, and a lot of lost sleep and administrative time, because of fear the legislature would do something arbitrary and capricious to cut PERS ORP inactives with no warning. Sounds like we’ll go through it all again next session.

http://persinfo.blogspot.com/7/2/2013: From Harry Esteve in the Oregonian:

It’s the last-ditch effort to raise more money for education and other state programs in exchange for deeper cuts into the Public Employees Retirement System. The Senate gavels in at 10:30, and the agenda includes House Bill 2456, which raises about $200 million in corporate, income and cigarette taxes, and Senate Bill 857, which puts further limits on cost of living increases for government retirees.

6/28/2013: From Hannah Hoffman in the SJ. Sounds like people who switched to ORP may be OK so long as they still work for the state:

The amendments discussed Thursday also included one further reduction to the Money Match program, beyond the COLA reductions. It would change the annuity rate on Money Match accounts for “inactive” retirees, or people who have left public service for more than three years and not re-entered. The current rate is 8 percent, and that would get cut to 4 percent.

If you aren’t eligible to retire either due to age or service or both) you are screwed (unless the court overturns these changes before you retire) as your money match benefit will see a 37% or more reduction. The PERS Board is considering changes to the assumed rate, which will affect Tier 1 earnings guarantee on August 1, 2013 and thereafter. Since the time is not adequate for the bill to be completely processed by close of business tomorrow, anyone who is inactive and who is already eligible to retire is taking a huge risk if tomorrow passes and a retirement application for July 1 isn’t already in PERS’hands. …

Lest you think this bill isn’t going to survive the end of session games, think again very carefully. The bill has the support of the Governor, Senate R and D members, OSBA. OBA.

It’s rising from the grave today as the Senate Committee on Revenue and Finance takes up two placeholder bills introduced last week. One provides space for legislation further cutting the cost of the Public Employees Retirement System and the other would allow for the tax deal.

The committee meets at 2 p.m. in Hearing Room A.

6/27/2013: persinfo.blogspot.com is a great source for PERS news. While anything could happen, Mr. Fearless thinks that the inactives are safe for now, and that if the legislature does do anything more this session they will cut the COLA for everyone (even more than the SB 822 cuts) and appoint a committee to try craft legislation that might stand up in court to decouple the annuity payout rate from the assumed earnings rate. This would mean large cost savings for employers, and large reductions in the monthly annuity for new retirees. That would take legislative action, presumably next session.

In addition, the PERS board is meeting in July and will presumably reduce the 8% rate to 7.5% or so, and update the death tables to reflect current longer life expectancies. These changes can be done administratively and will supposedly start phasing in starting in December. Word from people who know is that Tier one PERS (inactive or not) would have to work an additional 6 months or so to make up the difference, so people on the verge of retiring might consider speeding it up.

On the other hand, another factor to consider is that the TRP plan has become significantly less attractive. Under the TRP you get a 6% pay raise when you sign up, and then must give up your tenure within three years, then UO must hire your for 3 years 1/2 time or the equivalent, spread out over more years. But as of a few years ago UO stopped making retirement plan contributions after you have given up your tenure and started working part time. For Tier One people this is effectively a 20.5% pay cut, and that’s pre-tax money.

From a strictly financial standpoint it therefore may well make sense for potential retirees to keep working full time rather than plan on part-time work under the TRP. On the other hand you have to sign up for the TRP to get the 6% raise. At the margin I think this will mean more faculty will delay going on the TRP, which is quite cheap for UO, and so UO may have to sweeten the TRP deal in order to encourage higher paid full profs to retire. Of course that possibility gives yet another reason to delay taking the TRP.