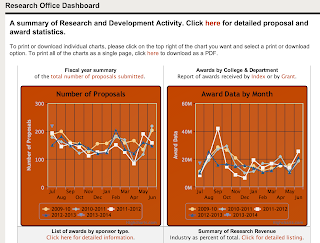 Oh wait, sorry, that’s for Oregon State. If you’re curious about research activity at UO, you’ll have to wade through a bunch of outdated pdf’s, here. Or you could make a public records request to UO for emails on our AAU status:

I am writing to request any emails and letters between AAU officials and University of Oregon Administration officials, Jim Bean or President Gottfredson, between September 1st, 2012 and May 20th, 2013 containing any of the key words: expulsion, suspension, revocation, disqualification, probation, cancellation or review.

but Dave Hubin is charging the student paper $96 for those, and they can’t afford it.

After reading today’s RG Op-Ed by Jim Reichman comparing UO research successes with athletics, and hearing AD Rob Mullens brag about his budget growing from $88M to $95M in one year, I wanted to update the Civil War information below. I’ll try again when Espy gets around to posting her numbers, because from what I hear she’s on the verge of driving a few more top PI’s away from UO.

12/29/2012. Diane Dietz has the story and data on UO here. I got the OSU data from their very complete Research Office data page, here. Both are “Federal Flow Through” totals, which are the easiest to find directly comparable data. They include spending on outreach and instruction, but it’s mostly research money and the trends look similar no matter how you cut it. That’s the table on the left. The table on the right shows athletic department spending, from USAToday. (Official UO and OSU numbers for 2012.)

The five years since Interim Provost Jim Bean took over have been a self-inflicted disaster for UO research. First there was Bean’s silly “five big ideas” effort. No disrespect to those who participated – but look at the funding sources data – that’s not where the money that might have kept UO in the AAU was to be found.

Then there was the large and continued diversion of funds from UO’s core academic mission to things like UO-Portland. Sure we need a presence there, but have you seen how expensive, and empty, the White Stag building is? Remember the Old Town sign? Like Bend, this all probably started before Bean – but why didn’t he have the guts, or the brains, to reign in Frohnmayer and Moseley?

Then there’s the millions UO has taken from the academic side to spend on sports. $1.83 million a year for athlete-only tutoring – straight out of the Provost’s budget. $467,000 a year to the athletic department for Mac Court – for the next 30 years. Millions of subverted overhead funds. Why didn’t you just say no, Jim?

On top of this all is the developing disaster that is Bean’s hire as VP for Research, Kimberly Espy. He got her straight from Nebraska – just after they got kicked out of the AAU. WTF? People ask me to try and keep track of how many PI’s Espy has chased off campus so far, and how many searches she’s blown. Sorry, I don’t have the time, gotta write a grant proposal. But the comments are open.