In fact UO’s average pay for assistants and fulls has actually fallen, presumably because of composition changes, though the % drops are mostly driven by pay raises at the other AAU schools. The retroactive 1.5% ATB raise proposed by the admin’s for 2012-13 is only for 6 months, so it’s really only a 1% raise, although it will show up in the AAU data as 1.5%. Sneaky. Either way it is not close to enough to make up for the ~3% UO faculty lost relative to other AAU publics between fall 2011 and fall 2012. Much less enough to get the elevator going up.
Cocktail party version:
No updates yet on the latest raises for central administrators – it’s almost as if Johnson Hall doesn’t want to make those public until after the faculty contract is signed. Rumor is they’ll make the big ones retroactive, to keep them out of the upcoming quarterly reports.
Note that we have no reliable data for NTTF comparisons. While the report says UO instructors earn 124% of the AAU average, that’s because for some bizarre reason the AAU only reports salaries for tenured instructors. At UO that’s only 6 people, mostly in sciences. In comparison we have ~1000 NTTFs, none of whom show up in these data. Crazy.
The admin bargaining proposal is for 10.5% over three years. But of course salaries at our peers will increase too, probably at a faster rate given the recovery. So the % of peers column will at best look pretty much the same in 2016, and probably worse by 4% points or so. And every year our administration sits on their pile of reserves means many more thousands in salary gap dollars that we will never see.
Summary data below, the IR page is here. For the masochists, or those looking to go on the market, the breakouts by department and rank are here. Increases at the other AAU’s mean that my own salary comparison has fallen from 67% to 61% of peers in one year. (And please, former interim provost Jim Bean, check the footnotes before posting your usual nonsense comments about medical school salaries.)
Benefits:
Rumor down at the faculty club thrift store is that the administration is going to trot out Tim Gleason to do PR pushing the argument that, after benefits are included, their proposal gets us up to peer averages. I’ve seen Gleason’s efforts at public speaking. This should be fun:
UO Matters operatives are standing by, ready to translate Tim’s benefit ramblings into English, and then disembowel them line by line.
What can you do about it?
Show up from 9AM-4PM Thursday at the Library to support your colleagues on the union’s hard-working bargaining team, as they present a counter to the administration’s proposal.
From Fall 2012: 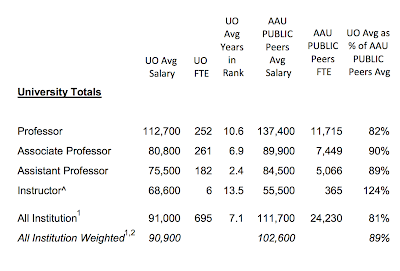 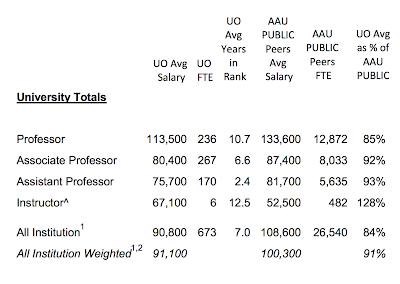 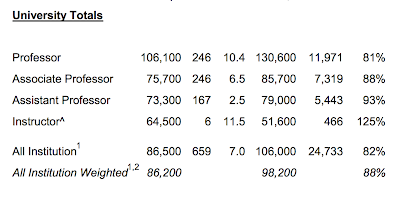