Shoes too! We are the University of Nike, dot com.

8/9/2013: U of Nike T-shirts now available! Click here to order from CafePress. $4 from each shirt goes to help UO Matters pay UO’s exorbitant public records fees, and maybe buy me a wee dram or two. Now also in Kelly green, by popular demand. Order one of each before Nike’s lawyers shut this down. 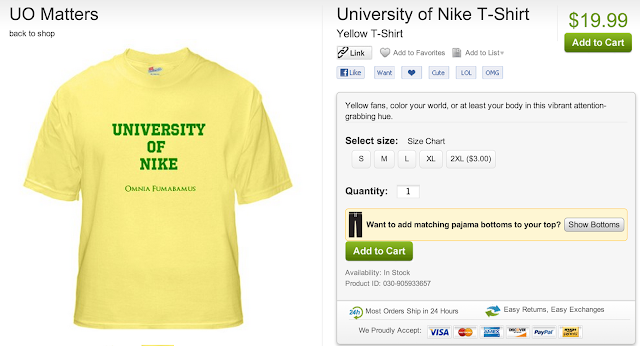 8/8/2013 Sweat Shop update: Some commenter – obviously not an economist – suggests I get the University of Nike t-shirts made in China. This is probably a reference to the 2000 Worker’s Rights Consortium fiasco, where UO President Dave Frohnmayer signed UO up with the WRC, which was fighting what they claimed was Nike’s use of “sweat shop labor” in countries like China. Phil Knight famously said Frohnmayer had “shredded the bonds of trust” with him, and he hasn’t given a dime to UO’s academic side since.

Well, the sad truth is that I can’t afford to get these U of Nike shirts made in China. Their economy has been booming ever since they started inviting foreign investments from “sweat shop” companies like Nike. Chinese wages are now so high that I’d have no profits left over to pay President Gottfredson for public records! Here’s some recent data:

The comparator is India, which until recently pursued an idiotic Ghandian policy of economic self reliance. Their people paid the price: still making t-shirts for $1500 a year, while plenty of Chinese are now rich enough to send their kids to the University of Nike for an education. Often in economics.

Hmm, maybe Uncle Phil is smarter, and not quite as evil, as some people think?

8/8/2013 updates: Ian Campbell of the Oregon Daily Emerald has a great piece on the true cost to UO students of the University of Nike’s boring blow-out wins:

The average college student only gets a total of 132 days — Thursdays, Fridays and Saturdays — per year to party, which means wasting some of that time watching the Ducks beat Arizona by 49 doesn’t become a high priority after the third quarter ….

This may explain Oregon’s disappointing #20 finish in the prestigious Princeton Review rankings. Although for a more serious take on the connection between big-time college football wins and college grades, read this article by some U of Nike economists.

8/7/2013 update: CSN is now reporting the Sweat Shop cost $138M. UO’s Risk Management Office probably has an exact number, since it must be on our insurance policy by now. Say, I wonder if VPFA Jamie Moffitt is going to make Rob Mullens pay any of the premiums for it? And spokesjock Craig Pintens is not backing off the “We are the U of Nike” statement.

8/6/2013 update: The University of Nike needs a motto for the t-shirts and coffee cups. In Latin, of course. Any suggestions? If you need inspiration, watch the Register Guard’s video below. Thanks to an anon commenter for the link, and to football coach Matt Helfrich for this quote:

“Incredible function the other night, there were about 20 boosters, myself included, crying over the personal nature of, whatever it was”. 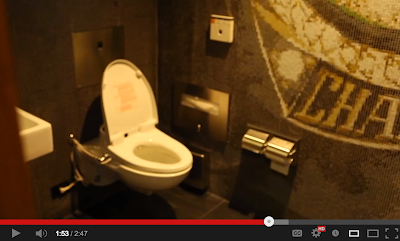 “And if this is also about coddling athletes — and let’s be honest, it is — then what happens when these young men head out into a world that’s real, not fantasy?

Besides concussion induced brain damage and the chance to try and sue the NCAA to get the rights to their name back, you mean? No wonder Mullens gave SI a week’s lead for their fluff. The letters to the editors attacking this waste of tax-deductible money are also good.

Meanwhile, Gottfredson still hasn’t appointed a committee to implement the May Senate resolution for ending athletic subsidies and getting the jocks to contribute to the academic side. How about taxing these excessive donations to the jocks, and using the money for UO’s academic mission? Unlikely, Kitzhaber is still trying to figure out just how many jock-sniffers to appoint to the UO Board.

8/5/2013: Professor Hawkins wasn’t kidding. Type “UniversityofNike.com” into your browser and see where it takes you. That .com really hurts. Couldn’t we have at least kept the .edu extension? Still no retraction from Hawkins and Mullens, and no comment at all from President Gottfredson. 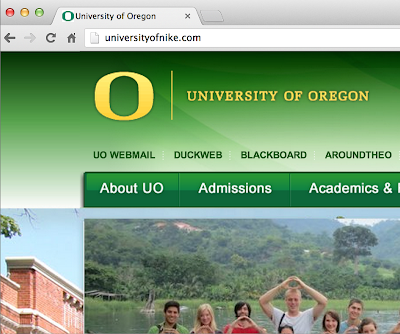 “People will complain, but this is not excessive,” said Rob Mullens, the university’s athletic director.

Of course it’s not excessive, you deserve it all Rob. We just want you to stop spending tuition money on jock stuff. But our efforts to name this building have come to naught. Instead, the athletic department has decided to rename the entire university:

“We are the University of Nike,” said Jeff Hawkins, the senior associate athletic director of football administration and operations. “We embrace it. We tell that to our recruits.”

Just the sort of publicity that will encourage parents to entrust their kids, and $45K a year, to UO. And it turns out Mr. Hawkins is on the payroll for a $29,500 performance bonus, as faculty. Hmm: 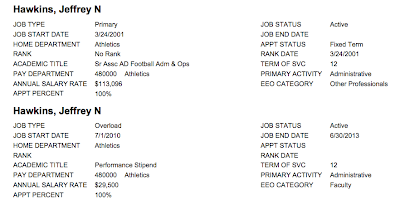 I’m guessing Professor Hawkins will soon issue a heartfelt apology regretting how his remarks were misinterpreted, along the lines of the one UO spokesperson Dave Williford had to make regarding his comments to the NYT back in December 2011. To be followed by another bonus from Dean Rob Mullens.

7/31/2013: Back in 2010 the NY Times reported that the UO students were calling the Jaqua athlete-only tutoring center the “Jock Box”.

OK, maybe that was because I made up the name and then told the reporter that’s what everyone on campus was calling it. The point is that it stuck, and you can see Mullens and the JH admins wince every time they hear it. So, anyone got a good sobriquet for Knight’s latest gift? 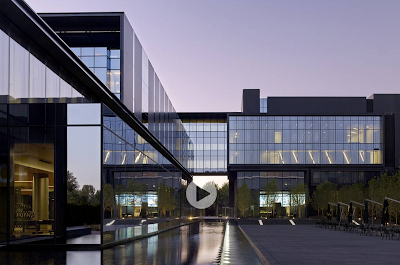 Ron Bellamy of the RG offers a milquetoast recap of a story reported by Bill Graves and Rachel Bachman in the Oregonian back in June: Phil Knight is building more athletic facilities for UO. As in the past, these tax-deductible gifts will cost taxpayers a bundle. They also require UO to pay for all sorts of silly things – like a “football museum curator” as a condition of the gift. I wonder if the academic side is going to pay that too, like we do the $2 million a year Jock Box operations? Read Bachman for details on how Phil Knight’s consigliere Howard Slusher made Lariviere an offer he couldn’t refuse.

8/3/2013: I’ve got to start the voting for top 5 names soon to get this on the Senate agenda for the next meeting, so comments close Monday. And we could use ideas for the youtube video. Our casting director is searching for the “Go Ducks Nutsack Man”, since he’s already got the sweaty jock-strap. Any recent sightings? 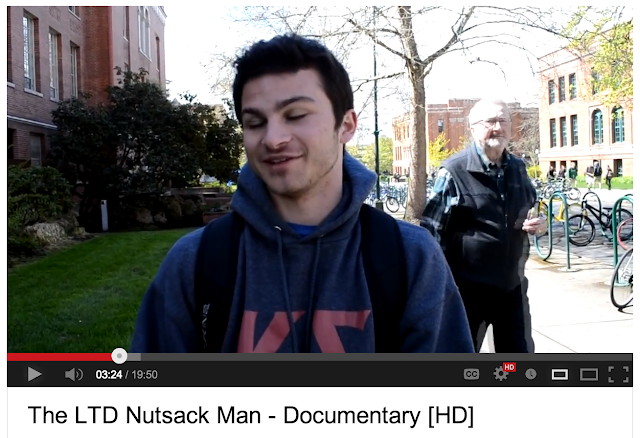 220 Responses to Shoes too! We are the University of Nike, dot com.