These ~12% raises are substantial. About half will be in our paychecks when the contract is signed, the rest in July 2014. However these raises are not enough to get average UO salaries by rank and department to the levels of our comparators, as Lariviere intended to do by fall 2014. More on this later, but some info on what that will take is here. Obviously it is still the goal of the union to do this. Bargaining for the next contract’s raises, to start in summer 2015, will begin in January or so of 2015.

The union argued for more merit and equity money (which can be used to reward faculty in more productive/competitive departments). Gottfredson’s team fought against this to the bitter end, and won a pyrrhic victory on this point.

I suppose one possibility is that the administration would have given the faculty more money if we hadn’t unionized, but they are such bitter and petty people that instead they decided to punish us for our effrontery. If this is true, someone – not me – might argue unionization was a mistake.

Another possibility is that getting UO faculty pay to our comparators is simply not “job #1” for President Gottfredson, who has many other priorities. His initial offer – 1.5% retroactive for 2/3 of year 0, then 1.5% ATB and 2% for merit in year 1 – was a sincere best offer reflecting those priorities. The union team got us that, plus a bit more than he wanted to pay in year 2, plus sabbatical and promotion raises, etc. And a goat.

My view is that there’s more truth to the latter possibility. I’d remind everyone that getting these raises out of the administration took months of struggle and hard work by the faculty volunteers on the bargaining team, and the AAUP’s Mike Mauer and the AFT’s David Cecil.

They did this in the face of determined resistance from the UO administration, including repeated refusals by VPFA Jamie Moffitt to provide basic data on UO’s financial picture and forecasts. President Gottfredson’s lawyer Randy Geller and Sharon Rudnick pulled a variety of cheap stunts, such as threatening to sabotage faculty consulting work, take away existing rights to intellectual property, and repeal the UO Senate’s free speech and academic freedom policies.

I don’t think those tools are going to work for our administrators next time.

Thursday’s session was quite the party, bring your colleagues.

9/16/2013 update: The free speech fight between President Gottfredson and his faculty has gone global. Colleen Flaherty at Inside Higher Ed broke the story on Thursday, then CUNY’s Corey Robin posted his take on his blog and on the popular Crooked Timber (tagline: Out of the crooked timber of humanity, no straight thing was ever made). He included a call to faculty worldwide to write President Gottfredson about this nastiness, and from the emails I’ve seen, they certainly have. The pro academic freedom Foundation for Individual Rights in Education blogged about it here, and Betsy Hammond of the Oregonian has a related story here. The latest updates on the admins anti free speech and academic freedom proposals are here. The language our administrators can’t live with?

The administration’s bizarre “open letter” accusing me of being anti-university is here. I don’t get a lot of visitors from Saudi Arabia, but I can understand why they’d be interested in this issue. Still nothing from North Korea though.

For Wednesday, items still on the table include salary, consulting, IP, free speech and NTTF contracts. The rumor from the crew planning the inaugural Faculty Club Goat Roast is that Scott Coltrane will be at the bargaining session, to answer your questions about his Sunday RG Op-Ed: 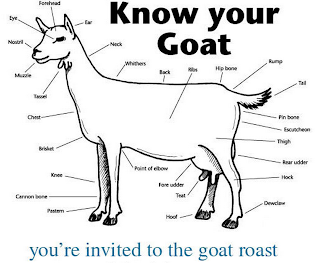 Bargaining should be a family friendly event this time. President Gottfredson’s lead negotiator Sharon Rudnick just received a prestigious international award for her work defending Philip Morris and RJ Reynolds from frivolous lawsuits filed by the families of their deceased customers, and should be in a happier than usual frame of mind. By our count Rudnick hasn’t threatened or grabbed any faculty since the 8/29 session, though someone might want to get a fact-check on that from Barbara Altmann at Monday’s head’s retreat.

Live Blog:
10:04: ~20 faculty so far. Free coffee and juice. Admin team includes Altmann, Blandy, Rudnick, Gleason and Grado. Waiting for the faculty side to come back for caucus.
10:21: They’re all here.

Rudnick: We won’t let union get involved in picking the promotion appeals committee. Provost’s call. (Problem is that it’s all insiders.)

Art 25, Termination w/o Cause, Admin counter.

Rudnick: We’re willing to agree no declaration of exigency and terminations w/o cause, because Jamie is so flush with liquid reserves. The well is full.

Lots of coffee over there too folks, have some courtesy of UO Matters.

Rudnick: The last termination of an NTTF was 1991, and there has apparently never been a termination of a tenured professor, though that Harbaugh guy is pushing the line.

The union counter includes explicit protection for the freedom “to engage in internal criticism, and to participate in public debate”. Also “The University Administration encourages and supports open, vigorous, and challenging debate …”

Mauer: We didn’t expect the administration to have such a problem with free speech. We appreciate that you finally backed off last week, after getting shredded in the press.

Rudnick and Altmann: Why did you take out the “con rispetto” part. Mauer: Whoops, you can put it back. (Big mistake, IMHO. This is way weaker than the April Senate policy Margie Paris wrote.)

~40 faculty sitting here on the group W bench, having a great time talking about our special crimes.

Mauer: Counter on Art 14, Appeal of tenure or promotion. We “At least one of the members shall be appointed from a list of nominees …” Rudnick: List of 3? Mauer: more than 1. Rudnick: 2.5. Mauer: at least 2. Rudnick: Deal.

Art 25, Termination w/o cause, union counter.

Cecil: We may wrap up bargaining today. For us, moving forward is difficult given what’s happening at AEI. 3-4 colleagues are not being renewed for reasons we don’t understand.

We want to let you know that why we are probably going to move off the Art 9 protections, but we hope we can find a way to bring these problems up in the future. If we can’t get you to agree with us on this, we at least hope that can get you to understand this issue. One of the AEI members moved to Eugene 5 years ago, got cancer, and is now being let go.

Rudnick: We hear you, we have met with AEI and we will continue to work with you on these issues. We have agreed to your language requiring explanations for terminations, and we will implement this for these terminations as a matter of professional respect.

Rudnick: Art 25, somthing about NTTF extensions to one-year, Geller’s Ok with it.

Mauer: On overhead transparency, you have our proposal, counter?

Rudnick: We have heard the concerns about Kimberly Espy, we will facilitate a meeting with her, the union, and appropriate faculty.

Mauer: We understand you are not willing to commit to an expectation of continued employment. Our compromise language deals with length of contracts, library,

Rudnick: How about “shall have 3 year contracts”? Mauer: OK. Rudnick, we’ll need to caucus at next break.

Mauer: 2.c. Admin must notify union if they take away email or network access.
Sec 7: Sticking point was “reasonable expectation of privacy” words which Geller gagged on. This language creates this expectation, without making Geller cry.  Requires admins to notify union in a timely manner if they start snooping around.

1:56 Rudnick to Gleason: “Are you OK Tim?” Caucus break so the admins can check.

MAUER: We have a 3 part package. On the money, faculty are shamefully underpaid relative to peers, UO has the funds to fix this. But we recognize you have moved, acknowledged that UO has problems. It’s not enough, but you have made movement from your initial 5.5% take it or leave it to ~12%.

So, we could accept your last proposal, IF: You stop over-reaching on the IP. We want you to sign a formal MOU on this, establishing a committee and maintaining the status quo in the meantime. On consulting, you guys are insane. We propose you drop the whole thing and go back to the current Senate policy. Deal?

2:30 They’re back, Rudnick takes the deal, says Gottfredson will too.

92 Responses to Bargaining XLI: Union strikes deal with "The University"