Post-review raises worth 1/3 of a goat

The rest of UO’s full professors are currently at 82% of the AAU public average. His latest salary proposal included a modest increase in the post-review raises for full professors How modest?
Here’s the bottom line: Gleason’s $350 goat bonuses will deliver about $420,000 in new money to the faculty. In comparison, over the two year contract, the post-review raises are worth about $147,000 – barely enough to buy 1/3 of a goat.

For comparison: Interim Provost Scott Coltrane’s office is budgeting $2.2M for the coming year to pay for the athlete-only Jock Box tutoring operations. This is a $300,000 increase over last year: 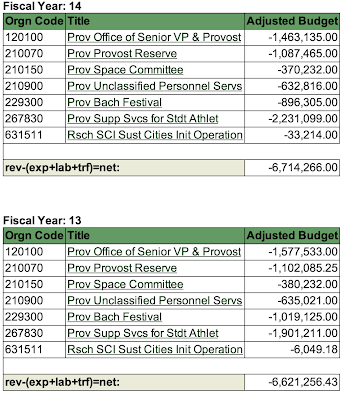 The full roll out of the post-review raises will take 7 years, at which point they will still only cost about 1/3 of the Jock Box subsidies.

The details: Assume there are 240 UO full professors in the union and that this is a steady-state.

Under the current and new plans, 1/6 of them come up for a sixth year post-tenure review every year. That’s 40 per year. Assume these reviews are 6 years after promotion, or 18 years into a 30 year career, so that they will receive their post-review raises for 12 more years. This means that in any given year 2/3 of the full professors, or 180, are receiving these raises. Assume that 3/4 of the full professors reviewed merit the highest raise.

These post-review calculations ignore the compounding effect of later wages, and their effect on the post-tenure raises, but given the compression at UO this is a small effect for now. And for that matter, if you go in with colleagues and buy 2 goats you get milk every year, and a much more rapid compounding growth effect too, so long as you get a billy and a nan.