Interim Provost Scott Coltrane’s email about the new faculty contract is here. He offers to answer questions. I’ve got a few, and I’ll keep you posted on the answers. You’ll have a chance to ask him yourself during the public presentation he will have to make as candidate for the permanent UO Provost job.

Meanwhile, here’s the math on how long it will take to get to comparators, and an estimate of what you’ll lose meanwhile – about $70,000, lower bound.

The faculty union did what it could. But while Gottfredson was happy to pay Sharon Rudnick and her consultants $1M, his word is that “the well is dry” when it comes to faculty pay, and Coltrane now seems just fine with that: 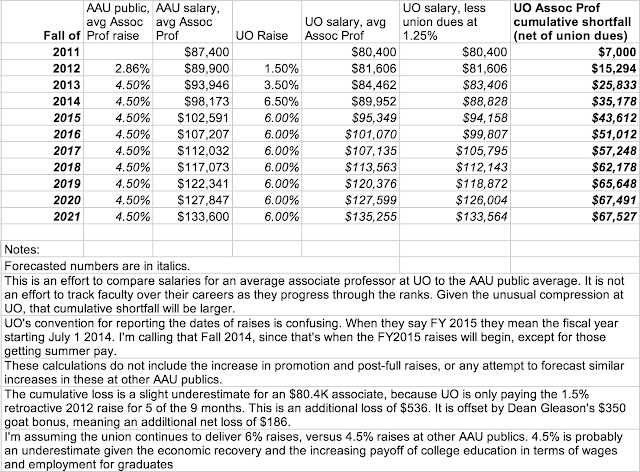 The original faculty union proposal, of 1.5%, 8%, 9% (which Gottfredson’s team laughed at) followed by a second contract at 6%, 6%, would have got us to the AAU average by 2016 – just 3 years later than the Lariviere proposal:

The next contract will need to be 10%, 10% to reach this goal, which the administration has purported to want to achieve since the 1998 Senate White paper.

In the scheme of a $800 million budget, we’re not talking about a lot of money. But it’s not going to happen unless we spend the next 18 months exposing Johnson Hall’s money wasting activities, and convince the new UO board that faculty are more important to their university’s future than more administrative bloat, sports subsidies, and expensive White Stag distractions.

24 Responses to Q: How long, Provost Coltrane, how long?