“We write this letter to our University community because we believe it is both necessary and appropriate to inform you of circumstances that are significantly impeding the on-going bargaining between the University and United Academics—the continued reporting of biased, erroneous and inflammatory reports from the bargaining table by Professor Bill Harbaugh on his blog, UO Matters, and Mr. Harbaugh’s insertion of himself into the bargaining process by filing repeated public records requests for information directly related to bargaining. We have raised this concern privately with the UA bargaining team several times, and the response each time is the same: what Mr. Harbaugh reports regarding bargaining is not our responsibility and there’s nothing we will do about it. Given the Union’s unwillingness or inability to address this matter, we have decided to bring it directly to the University community’s attention. …”

I thought this letter was more embarrassing to its authors than to me – although a few colleagues thought it was defamatory and professionally damaging. I mostly ignored it except for a letter to university President Mike Gottfredson asking him to disown it, which he did not respond to.

Then the administration rejected the union’s free speech and academic freedom proposals, countering them with restrictions that would give university administrators the ability to discipline faculty for criticism of the administration, which I frequently engage in.

At that point I made a public records request to get information about the authors of the letter and how it came about that Mr. Geller, an attorney, would approve putting such a thing on university letterhead and posting it on an official university website. Or alternatively, if your attorney allows, you may be able to get a letterhead template from somewhere like MyCreativeShop or somewhere similar.

To add to the absurdity, President Gottfredson’s Public Records Office, which is supervised by his Special Assistant Dave Hubin, replied by saying that I would have to pay $225 to see those documents:

The University of Oregon has received your public records request for “any emails, letters, or memos sent to, cced on, or received by UO General Counsel Randy Geller, regarding the 2/28/2013 open letter from the UO administration’s faculty union bargaining team to UO Economics Professor William T. Harbaugh…”, on 08/20/2013, attached. The office has at least some documents responsive to your request. By this email, the office is providing you with an estimate to respond to your requests.

The office estimates the actual cost of responding to your request to be $225.56.

The letter, and my unanswered reply to President Gottfredson are below: 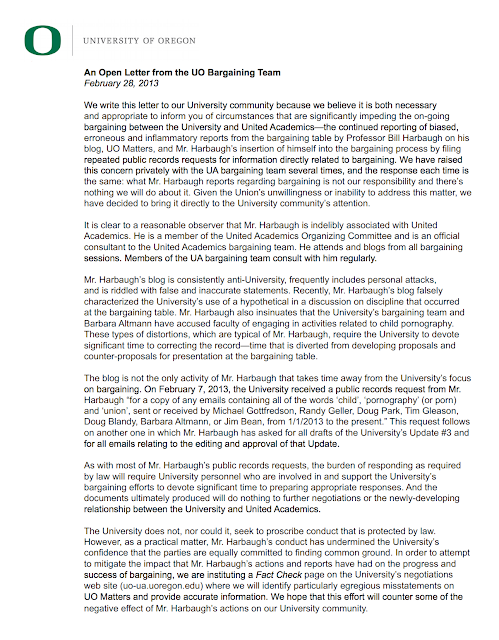 A colleague came across this website a week or so after the letter had apparently been posted, and alerted me to it. I thought it was pretty hilarious, particularly in its discussion of the UO Matters blog at https://uomatters.com, which I edit, and in regard to the claims that I am “indelibly associated” with the faculty union.

10/20/13 update: The administration’s fact-check website about the faculty union negotiations cost the academic budget about $250,000. It was unceremoniously taken down a week or two ago, and has now been quietly replaced by a new, partially sanitized site at http://uo-cba.uoregon.edu/. The new site keeps some of the old fact-check stuff, such as

Claim: UO Matters blogger Bill Harbaugh is also acting as an economic consultant for United Academics. Tuesday, when the UA bargaining team left the table to caucus, he went with the team. But that doesn’t mean he can get his numbers right.

but it removes the “open letter” from the administration’s bargaining team that accused me of being “consistently anti-university” and “indelibly associated with United Academics”. It also removes all links to that letter. It’s as if Rudnick and Geller never wrote it. (I’ve got an archive of the entire old site, let me know if you want the files.)

Under the resources tab, the administration’s site provides a helpful (if it weren’t broken) link to an Inside Higher Ed story that vaguely supports VPFA Jamie Moffitt’s arguments for increasing UO’s reserves, but I can’t find any mention of the more critical Inside Higher Ed story reporting on President Gottfredson’s efforts to limit academic freedom and freedom of speech. I’m happy to provide both: Budget story here, academic freedom story here, more on that issue and links to other stories here.