In the absence of formal minutes from the meeting, I’m posting a brief summary. The agenda for the retreat, held Tuesday 10/22, was set by IAC Chair Rob Illig (Law) as follows:

Randy Geller didn’t show. In his absence the Chair read an email from him, opining that Oregon’s Open Meeting Law did not apply to IAC meetings, and another saying that UO would defend the faculty, if we were sued for not following that law.

At least that’s what I think Geller’s emails said. Illig first said he thought he had already forwarded the emails to the IAC. Then he wrote several times to say that he would forward them. Now he is refusing to share them with committee members. He says that Geller has decided to write another opinion on these matters, and that he will share this he receives it from the General Counsel.

The IAC met today to elect a chair. Professors Harbaugh (Economics) and Karduna (Human Phys) gave stirring speeches, but were crushed by Rob Illig (Law), who got 9 of 16 votes cast. Illig is the presumptive contender to replace Jim O’Fallon (Law, emeritus, 24 years as FAR, still without a review) as UO’s NCAA Faculty Athletics Representative next year. So this will be something of a baptism by fire, and provide some valuable information on his suitability for that important job. We’ll keep you updated, with respect, and within the limits of whatever confidentiality policy the IAC adopts.

9/17/2013: UO’s IAC met this afternoon in a mediated session, moderated by noted dispute resolution expert Eric Lindauer. Lindauer was brought in by Senate President Margie Paris. The objective was to help make the committee, which deals with many contentious high-stakes issues, function more effectively.

We discussed many things, most notably:

Some related documents include: 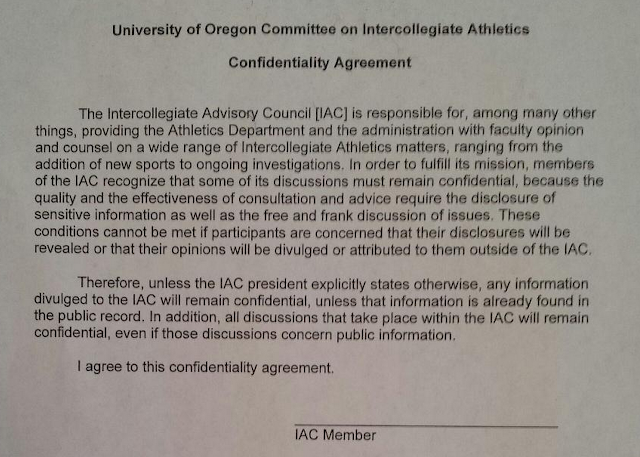 The Faculty Advisory Council is responsible for providing the President and other Administration officials with faculty opinion and counsel on the wide range of university affairs. In its relations with the President, the Administration, and with the faculty, the Faculty Advisory Council shall act either on request or on its own initiative. To fulfill its mission, members of the Council recognize that its deliberations must remain confidential. The quality and the effectiveness of the advice we give depend on a free and frank discussion of issues, in which all participants can voice their opinions without fear that their positions will be divulged or attributed to them outside of the Council. Furthermore, the FAC often treats issues that are in the public domain. Any information presented at a FAC meeting that is not in the public record will remain confidential. All discussion about information that is in the public record will also remain confidential. Participants in the FAC will not refer to or divulge Council deliberations and comments with specificity in discharging their obligations as faculty, administrators, or staff. By pledging to adhere to the confidentiality of its proceedings, participants in the FAC commit to fulfilling their legislative charge. The Council shall be the forum where the President and other Administration officials seek faculty advice on all important decisions that affect the university before they are implemented, and where the issues that inform these decisions will be considered thoroughly and with mutual respect.