11/12/13: I recently received the “demand for retraction” below, from Thomas Herrmann, legal counsel to the UO Foundation, presumably writing on instruction from the Foundation’s Chairman Jon Anderson, a former marathon runner with longtime Nike connections, and the Foundation’s 2013 Chair-elect and committed athletics booster Stephen Holwerda. A bio-piece on Mr Holwerda in the Portland Business Tribune notes:

Greatest passions: Oregon pinot noir, sports, antique mechanical banks.
First choice for a new career: I started out in athletic administration, and if I had to pick a second career it would be to go back to working for the University of Oregon’s athletic department. Go Ducks.

[Above updated to note that Anderson is Chair, Holwerda is Chair Elect. Thanks, commenter.] 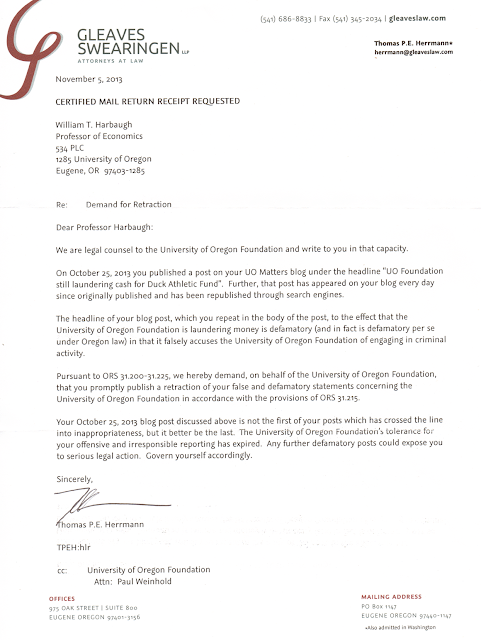 The ORS 31.200-31.225 statute that Mr. Herrmann cites in his take-down demand is titled “Liability of radio or television station personnel for defamation”. 31.205 discusses “Damages recoverable for defamation by radio, television, motion pictures, newspaper or printed periodical”. So I guess I am a professional news organization, at least in the eyes of the UO Foundation. Section 31.215 lays out the following procedure for retraction demands:

(1) The demand for correction or retraction shall be in writing, signed by the defamed person or the attorney of the person and be delivered to the publisher of the defamatory statement, either personally, by registered mail or by certified mail with return receipt at the publishers place of business or residence within 20 days after the defamed person receives actual knowledge of the defamatory statement. The demand shall specify which statements are false and defamatory and request that they be corrected or retracted. The demand may also refer to the sources from which the true facts may be ascertained with accuracy.

(a)The first issue thereafter published, in the case of newspapers, magazines or other printed periodicals.

(b)The first broadcast or telecast thereafter made, in the case of radio or television stations.

(c)The first public exhibition thereafter made, in the case of motion picture theaters.

(3)The correction or retraction shall consist of a statement by the publisher substantially to the effect that the defamatory statements previously made are not factually supported and that the publisher regrets the original publication thereof.

(4)The correction or retraction shall be published in substantially as conspicuous a manner as the defamatory statement. [Formerly30.165]

I have received a plethora of advice on how to respond to this threat. Several attorneys have looked at it, and my post, and said that they do not think that my language is an accusation of criminal activity, particularly given the full context of the post. They have suggested I call the Foundation’s bluff and then file an anti-SLAPP countersuit against them, if they proceed with a lawsuit against me.

I was also told that that the language in Mr. Herrmann’s blustery last paragraph would be quite helpful in a counter-suit, given that anti-SLAPP laws such as Oregon’s are specifically designed to make it difficult to use defamation lawsuits to limit public discussion, as his threat seemingly proposes to do.

One reader suggested that I offer to replace the phrase that the Foundation claims to interpret as an accusation of criminal activity, i.e. “money laundering cash for the Duck Athletic Fund”, with something like “lovingly laundering sweaty jockstraps for the Duck athletic department”. Thanks for this proposal, really.

In the end, I decided to follow the precedent established by noted barrister John Cleese. Mr. Herrmann, you may take this video as my response, in full, to your threatening letter:

Meanwhile, back in Chicago:

Chicago State University seems to have some of the same insider dealing issues that have troubled UO. Check out their “Crony State University” blog, written by 8 faculty. Impressive.

They’ve also been served with a takedown notice. News stories in the Chicago Tribune, InsideHigherEd and Chronicle. (Thanks to Margaret Soltan’s ever interesting blog for the link).